The Fatima Masumeh Shrine in the city of Qom in Iran. Fatimah bint Musa (790–816) was the daughter of Musa al-Kadhim, the seventh Shia Imam.
Image: Diego Delso

Muslim Countries around the World

The main regions of the world with a predominantly Islamic population are located in Central Asia, the entire Middle East and Western Asia (except Armenia and Israel), all of North Africa, and many countries in West Africa, South Asia, and Maritime Southeast Asia.

In how many countries is Islam the main religion?

Islam (Arabic: اَلْإِسْلَامُ) is an Arabic word meaning “submission”. Obedience to God is a central theme in the Islamic faith. The monotheistic belief system originated in the 7th century through the teachings of Muhammad (SAW). Muslims believe that Muhammad was the last of all religious prophets (beginning with Abraham) and that the Koran was revealed to him by God.

According to Islamic theology, Islam is the original, complete and universal version of a primordial faith that was revealed many times before through prophets including Adam, Noah, Abraham, Moses, and Jesus.

Today adherents of Islam constitute the world’s second-largest religious group. An estimated 1.8 billion or more than 24% of the world population identify themselves as Muslims. Islam is the official religion in 26 countries in Asia, sub-Saharan Africa, North Africa, and the Middle East.
Islam is growing faster than any other religion worldwide (see: Pew Research Center). 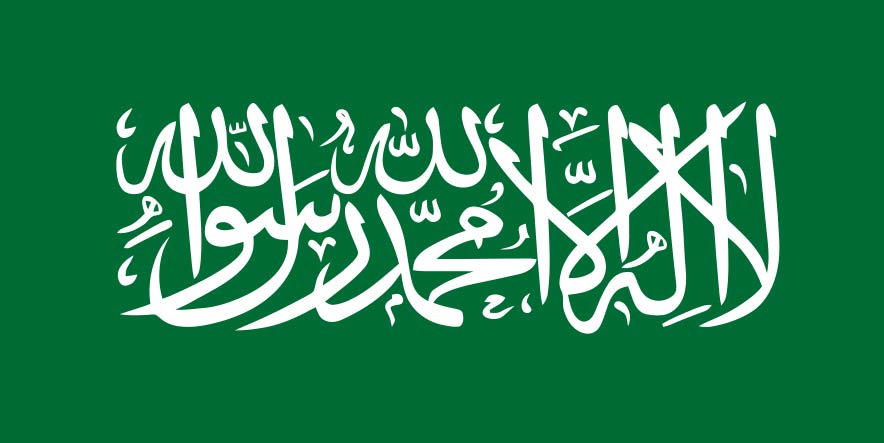 The Arabic script on the Saudi Arabian Flag is the Islamic creed, known as the Shahada; it translates to: “There is no god but God and Muhammad is His messenger.” The Shahada is the first of the five pillars of Islam.
The two main branches of Islam today, Sunni and Shia
The two primary branches of Islam are Sunni and Shia. The sects split from each other soon after the death of the Prophet Muhammad, over a religiopolitical leadership dispute about the rightful successor to Muhammad.

The great majority of the world’s Muslims are Sunnis; its followers make up 87 to 90% of the global Muslim population. Sunnis regard the first four caliphs as legitimate successors of Muhammad. The majority of the Muslims of Indonesia, Pakistan, Bangladesh, Egypt, Jordan, Gaza and the West Bank, and Saudi Arabia are Sunnis. They regard themselves as the traditional (original) followers of the Islamic faith.

Sufism is an Islamic ascetic-mystical tradition, the esoteric dimension of the Islamic faith. Sufism has existed since the early days of Islam and is found in almost all Islamic countries. The devotions of many Sufi orders centre on various forms of the dhikr(ذِكْر), (Dhikr Allah: Remembrance of God). The dedication can be expressed in a ceremony at which music, body movements, and chants induce a state of ecstatic trance in the disciples.

Islam originated on the Arabian Peninsula in the first quarter of the 7th century. The faith has spread from there all over the world. The traditional heartlands of Islam are listed below.

29,826,000Sana’aAn estimated 53% of the population is Sunni, and 45% is Shia. The Houthis, a Shia Islamic political and armed movement, have gained control of most of the northern part of Yemen’s territory.
—

9,890,000Abu DhabiIslam is the official religion of the UAE. Just 20% of the population of the United Arab Emirates are UAE citizens. All Emiratis are Muslims; about 85% are Sunni, and 15% are Shia.
—

2,724,000DohaIslam is the state religion in Qatar. Qataris are all Muslims and followers of the Sunni Salafi version of Islam. Just 12% of the entire population are Qatari citizens.
—

1,503,000ManamaIslam is the state religion in Bahrain. About half of the population are Shia, the other half Sunni.
—

40,223,000BaghdadIslam is the state religion in Iraq. The country is home to several important Islamic cities, such as Karbala, Najaf, Kazimayn (Baghdad), and Samarra.

Countries with the highest percentage of a Muslim population

557,000MaléIslam is the state religion of the Maldives, and citizens are legally obliged to adhere to it. The Sharia, the traditional Islamic code of law, forms the basic legal code of the Maldives.
2

4,650,000NouakchottMauritania is an Islamic republic, and all Mauritanian citizens are (Maliki) Sunni Muslims.
3

11,819,000TunisIn the constitution of Tunisia, Islam is declared the country’s religion. About 99% of Tunisians are Sunni Muslims.
5

652,000TifaritiLarge parts of Western Sahara are a non-self-governing territory; about 75% are under Moroccan control.
8

29,826,000SanaaYemen’s constitution declares that Islam is the state religion, and Arabic is the official language.
9

43,900,000AlgiersIslam is the state religion in Algeria. The vast majority of Algeria’s citizens are Sunni Muslims.
10

35,952,000RabatAn estimated 99% of the population adheres to Islam. About two-thirds of the Muslims in Morocco are Sunni Maliki.
11

870,000MoroniThe Comoros is the only predominantly Muslim country in southern Africa. About 99% of the population are followers of Sunni Islam.
12

Niger24,207,000NiameyThe vast majority of the population in Niger are practicing Muslims (99 %). Malikite Sunni, with Salafi influences, is the dominant denomination.
13

34,218,000RiyadhIslam is the state religion in Saudi Arabia. The country is home to Mecca and Medina. The two holiest cities of Islam attract millions of Muslim Hajj pilgrims every year.
14

5,101,000RamallahIslam is the religion of the majority of the Palestinian Arab population in the State of Palestine (predominantly Sunni).
16

10,756,000AmmanThe majority of the population of this religious and conservative country is Muslim (97.2 %, predominantly Sunni).
17

6,871,000TripoliMost Libyans are Sunni Muslims. Islam, as practiced in North Africa, is often interwoven with the native Berber faith. [1]
19

280,000MamoudzouMayotte is a volcanic island group in the northern channel of Mozambique and part of the Comoros archipelago. The population of the French overseas territory is, as in Comoros, predominantly Muslim.
20

43,850,000KhartoumSudanese Arabs make up the majority of the population, and (Sunni) Islam dominates life and politics in the country. Sudan has one of the largest Sufi communities in the world. [2]
21

10,067,000BakuAlmost all Azerbaijanis are followers of Islam. Azerbaijan’s Muslim population consists of about 85% Shiites and 15% Sunnis.
22

220,892,000IslamabadIslam is the state religion in Pakistan. More than three-quarters belong to Sunni Islam, while the rest is Shiite. Pakistan is home to the world’s largest community of Ahmadi Muslims, an Islamic splinter sect.
23

2,417,000Banjul95% of the population of the smallest country on the African mainland are Muslims. The majority of them follow Sunni laws and traditions.
25

6,000,000AshgabatTurkmenistan’s population consists of about 93% Muslims and 6% Eastern Orthodox, which are predominantly Russians.
29

Bangladesh165,000,000DhakaThe state religion of the republic is Islam. 91% of the population of Bangladesh are Muslims, 8% are Hindus.
30

101,097,000CairoIslam is the dominant religion in Egypt. It is the state religion and is anchored in the Egyptian constitution of 2014.
31

83,155,000AnkaraTurkey’s population is 70-75% Turks and about 20% Kurds. Islam is the dominant religion in Turkey; more than 99% are Muslims (mostly Sunni). Since 2003, the government under now President Erdogan is pursuing an explicit policy of Islamizing, not only of the educational system but the society as a whole. [3] 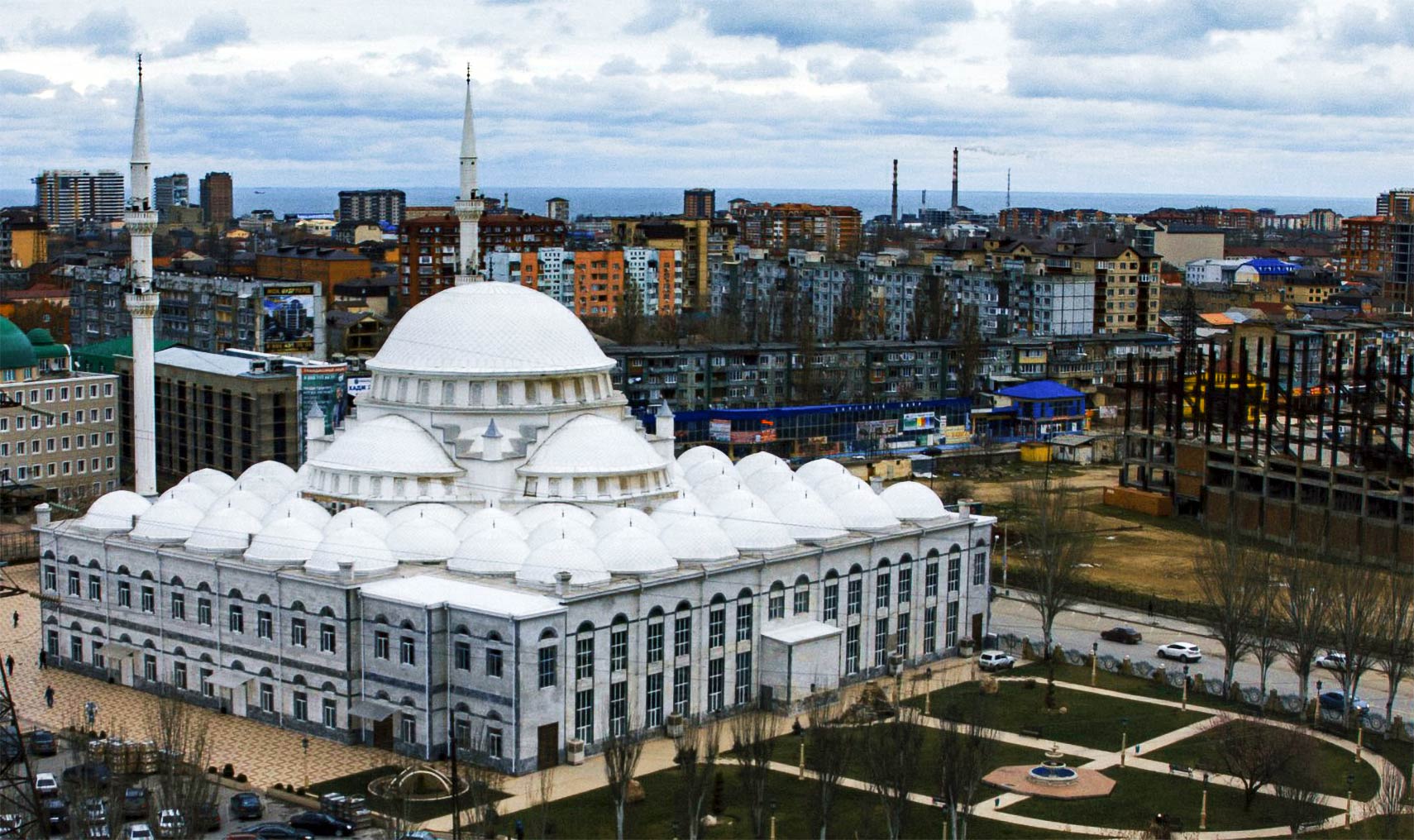 The Grand Mosque in Dagestan’s capital Makhachkala is the principal mosque of the Russian republic on the Caspian Sea.
Image: Shamil Magomedov

Countries with the largest Muslim population

. The overwhelming majority of Indonesia’s Muslim population (99%) are Sunnis. Nevertheless, about one million adhere to Shia Islam (0.43%). Internal migration has increased the percentage of Muslims in formerly predominantly Christian eastern parts of the country.
—

202,650,00092%Islam in Pakistan emerged in the 7th century in Sindh communities along the Arab coastal trade routes. Today, Pakistan is the country with the second-largest Muslim population in the world.
—

195,000,00014%Islam is the second-largest religion in India after Hinduism. India has the largest Muslim population outside the majority of Islamic countries. India’s Muslims are mainly Sunnis.
—

153,700,00093%Most Bangladeshis are Bengali Muslims, a synthesis of Islamic and Bengali cultures.
—

109,254,00053%The country has the largest Muslim population in Africa. More than half of Nigeria’s population is Muslim, predominantly Sunni. About 12% of Nigerian Muslims are Shiites. The main ethnic groups in Africa’s most populous country are Hausa 30%, Yoruba 15%, Igbo (Ibo) 15%, and Fulani 6%.
—

90,987,00090%Egypt is the most populous country in the Arab world. Islam is the state religion, according to the Egyptian constitution.
—

80,660,00097%The predominant religion in Turkey is Islam (theoretically 97%). Turkey has been a fairly secular country since Atatürk, but in the last two decades, it has been largely ruled by Erdogan’s AK Party, which is steeped in political Islam.
—

42,535,00097%Sudan’s ethnic groups are Sudanese Arabs (about 70%), Fur, Beja, Nuba, and Fallata.
Islam is the predominant religion in the country, and (Sunni) Muslims have dominated government institutions since Sudan’s independence in 1956.
—

38,283,00033%About one-third of the country’s population are (Sunni) Muslims. The emigration to Abyssinia (Ethiopian Empire), also known as the first Hegira, was an episode in the early history of Islam when Muhammad’s first followers (the Sahabah) fled Mecca from the persecution of the ruling Quraysh tribe.

35,592,00099%Morocco is inhabited by mixed Arab-Berbers and Imazighen (Berber). According to Morocco’s constitution, Islam is the state religion in the kingdom.

30,135,00088%The country’s Muslim majority are (Hanafi) Sunni. Uzbekistan’s government is opposed to a political Islam in the country. The Uzbek government eliminated the Islamic party in 1992, and one university had to close its Faculty of Islamic Studies.

25,000,0001.8%The Hui and the Uighurs from Xinjiang are the Chinese minority groups with the largest Muslim population. [4] China has blamed Islamic separatists from Xinjiang for a series of attacks on Han Chinese in recent years. Leaked government papers revealed China’s crackdown on ethnic Muslim minorities in the Xinjiang region. [5]

Sunset behind Süleymaniye Mosque in Istanbul, the transcontinental city in Turkey. The mosque was built by order of Sultan Süleyman the Magnificent in a very short construction period between 1550 and 1557.
Image: Mariano Mantel

Islam in the Western World

The European nations shaped by Christianity and the Islamic countries have a shared history of more than thirteen hundred years. Since the 1950s, the immigration of Muslims to Europe has led to the emergence of numerous Muslim minorities in many European countries. Today Muslim communities live throughout Europe. Living together is not always smooth. In recent years, attacks by Islamic terrorists have become more frequent in European countries. But Islamophobic incidents and violent attacks on Muslims have also increased. [7] There is a growing number of European citizens who say that Islam is “fundamentally incompatible” with the culture and values of their country. [8]

List of European Countries with the largest Muslim Population.

6,000,0009%Islam is the second-largest religion in France. The country has the largest number of Muslims in the Western world, primarily due to migration from the Maghreb countries, West Africa, and the Middle East. Today about 9% of the population are Muslims.

5,000,0006%As a result of labor migration in the 1960s and 70s and several waves of political refugees since the 1970s, Islam has become the third largest religion in Germany after Roman Catholicism and Protestantism. About 6% of Germany’s population are Muslims.

3,373,0005%About 5% of the United Kingdom’s population are Muslims, making Islam the second-largest religion in the country.

1,700,00060%Islam in the Balkans is an Ottoman heritage and is the largest religion in the Albania. About 60 % of Albanians consider themselves Muslims. The former communist country has closed mosques and churches in 1967. In November 1990, Albania allowed the private practice of religion again.

1,600,0002.6%Italy has been for centuries a country on the front line where Islam and Christianity clash. Islam is not formally recognized by the Italian state. The country has an overwhelmingly Roman Catholic population (83%).

Countries where Islam is the state religion

26 predominantly Muslim countries have anchored Islam or a specific form of it in their constitution as a state religion.

The map shows the percentage of the Muslim population in each nation worldwide. (click on the map to enlarge).
Image: M Tracy Hunter

World map of the Muslim population (click on the map to enlarge).
Image: Edin Radončić https://www.nationsonline.org/oneworld/muslim-countries.