Rajeeva Ranaweera’s obsession with Sampanthan continues unabated. In his latest outburst “Bungalow for Sampanthan and Sirisena in The Island (Thursday, January 26, 2020), he has repeated his earlier accusations that the allocation of a bungalow to Sampanthan is unlawful.

Rajeeva Ranaweera the self-appointed crusader against corruption is selective in his criticism of R.Sampanthan who has been allowed to occupy his bungalow on condition. This is not the same as allowing ex-president Maithripala Sirisena who can occupy his bungalow for the rest of his life. On the contrary TNA leader has a specified time frame. He can occupy the bungalow only so long as he is the leader of the TNA.  On the other hand, Sirisena as ex-President is entitled to a bungalow, but whether he is entitled to the same bungalow is debatable.  Any way the Cabinet decided to allow him to occupy the same bungalow and that ends the story. 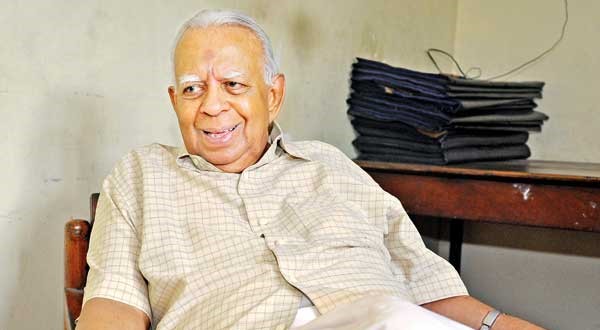 Sampanthan in parliament has stated that he had not requested former President Maithripala Sirisena or former Prime Minister Ranil Wickremesinghe to allow him to occupy that official residence. According to him, the duo had done so of their own volition. But Ranaweera insinuates that M.A. Sumanthiran approached the new Leader of Opposition in the precincts of the Parliament who readily agreed to refrain from demanding the return of the bungalow, probably as a favour to be returned later.  (https://srilankabrief.org/2020/01/sampanthan-clarifies-the-issue-of-occupying-a-official-residence/)

He is imputing motive that Sampanthan preferred had other plans and waited till the renovation is over to get the government bungalow.

The renovation was carried out not at the request of Sampanthan; it was done by the government on its own volition. Prior to Sampanthan, the bungalow was occupied by late Ratnasiri Wickramanayake (83) who was Prime Minister (2000-2001 and 2005-2010) till his demise on 27, December 2010. That might have been the reason for the decision to renovate the bungalow.

Jayaweera has conveniently omitted to quote the statement Sampanthan made in parliament regarding the vehicle facility. He told parliament “The only other facility not referred to so far is vehicle number CAT 1094, a Benz motor car. The vehicle was handed over to me on 30/1/2017. I sent the vehicle to the new Leader of the Opposition on 7/1/2019. During the two years the vehicle was in my possession, it has done only 2,082 kilometres, showing how sparingly the vehicle was used.”

Can Jayaweera cite one Sinhalese Minister who used his Benze vehicle clocking 2,082 kilometres for a period of 2 years? It may be recalled that Rs.1.4 billion worth of 60 vehicles including the latest Mercedes Benz C Class and BMW 7 series were imported for the travel of the attending Commonwealth Heads of States in 2013. Also imported were luxury coaches, jeeps and cars for the use of the VIP delegates. Imported luxury vehicles were supposed to be used by the ministries after the CHOGM was over. However, many imported vehicles were gifted by Mahinda Rajapaksa to his cronies at no cost. (http://ceylontoday.lk/16-28573-news-detail-200-luxury-limos-for-chogm-2013.html)

In regard to the observation by Ranaweera that “86-year-old, may it be a politician or any other, be in retirement playing with their grandchildren?” is a new low but not surprising knowing his mindset.

Sampanthan was first elected to parliament in 1977 and vacated his seat in 1983 when the TULF boycotted parliament following the 6th   Amendment JR government.  Sampanthan re-entered parliament from Trincomalee electorate in 2001. He won all subsequent elections.    Not only Tamils even Muslims and Sinhalese vote for him. He can easily get elected at the next parliamentary elections but he has announced his decision not to contest.  It is not Ranaweera, it is the Tamil people who will decide whether he should continue or not as a Member of Parliament. Jayaweera should not lose sleep over it.

What age did J.R. Jayewardene step down as president? At the age of 84 and he would have continued as President if not for the 2 term limit. He died at the age of 91. How old is Mahathir bin Mohamed the Prime Minister of Malaysia?  He is 95 (10the July 1925) 7 years older than Sampanthan!

Jayaweera is targeting Sampanthan solely because he is a Tamil politician.  He has no guts to expose the mega corruption deals involving Sinhalese politicians like the Rajapaksa family.  That family committed Serious Acts of Fraud, Corruption and Abuse of Power, State Resources and Privileges while in office.

1) Gotabaya Rajapaksa when he was the Defence Secretary and Secretary to the Urban Development built the Rajapaksa Mausoleum and Museum at Medamulana using state resources. It cost Rs.80.2 but he made a partial settlement of only 33.9 million leaving a balance of Rs. 47.3 million. This amount is owed to Sri Lanka Land Reclamation and Development Corporation (SLRDC).  How can Gotabaya talk about corruption when he himself is corrupt?

2) SriLankan Airlines changed a wide-bodied A340 scheduled to fly to Zurich on Friday July 13, to a smaller A330. The change was made so that a Srilankan Airline pilot, who is dating a niece of President Mahinda Rajapaksa could personally fly the aircraft that would carry a ‘puppy dog’ for Defence Secretary Gotabaya Rajapaksa from  Zurich. (https://www.colombotelegraph.com/index.php/gota-has-gone-to-the-dog-srilankan-airlines-and-a-puppy-dog-for-his-wife/)

4) The New York Times reported that with 10 days to go before polls opened, around $3.7 million was distributed in cheques: $678,000 to print campaign T-shirts and other promotional material and $297,000 to buy supporters gifts, including women’s saris. The article claims that another $38,000 was paid to a popular Buddhist monk who was supporting Rajapaksa’s electoral bid, while two cheques totalling $1.7 million were delivered by volunteers to Temple Trees, the official residence of then-President Rajapaksa. The total disbursement was $7.6 million (Rs.1368 million).

5) Both Mahinda Rajapaksa and Gotabaya Rajapaksa gifted a golden statue of Buddha to the Sandahiru Maha Saya in the presence of Maha Sanga in Anuradhapura. The statue was made out 8 kilos of confiscated gold by the Customs and handed over to the Rajapaksas. While the Rajapaksas have got away with the massive and shameful “theft” poor Director General of Sri Lanka Customs Jagath P. Wijeweera and former Customs Additional Director General Tharaka Seneviratne were arrested by the FCID and charged in courts by the previous government. (http://www.island.lk/index.php?page_cat=article-details&page=article-details&code_title=211238)

6) Mahinda Rajapaksa left Rs.4.4 billion worth of unsettled bills in 2015. Among the unpaid bills is Rs. 2 billion due to the Customs for items imported by the Presidential Secretariat, Rs. 113 million due by the Presidential Secretariat to Srilanka Airlines. A sum of  Rs. 10 million to Ganga Catering Services for a function at Carlton House, Rs.10 million due to Premasiri Stores for consumer items bought from the shop and various sums due for putting up of tents and temporary huts.

7) Basil Rajapaksa built a luxury mansion at a cost of Rs. 240 million on a 16 acre land in Malwana in Gangabada Road, Malwana but when FCID started investigation he disowned the property! The land was owned one-time Tirukkumaran Nadesan (married to Nirupama Deepika Rajapaksa Mahinda Rajapaksa’s niece)  alone was valued at  Rs. 60 million.  The Magistrate who heard the case ordered the land and property be auctioned.  (https://www.colombotelegraph.com/index.php/basil-loses-his-125-million-worth-luxury-villa-in-malwana/)

The above list is by no means complete. Jayaweera is pennywise and pound foolish.  He is magnifying small things disregarding mega corruption by the Rajapaksa family. He is going after Sampanthan because he is a Tamil politician.

Statement of urgent public importance pertaining to the Bungalow of the Leader of the Opposition and other matters related thereto.

You recognized me as the Leader of the Opposition of the Sri Lankan Parliament in September 2015.

At that time, for over twenty years, as a Member of Parliament, I had been occupying the Summit Flats 2D, where I climbed and descended 60-70 steps every time I entered the flat or left the flat. Given my age, I’m well past eighty (80), this was very inconvenient and difficult but I put up with it.

While they were looking for a bungalow for me, the former President suggested to me that I rent out a bungalow. I did not want to do that on account of the exorbitant cost it would have entailed.

Other facilities provided to me as the Leader of the Opposition were attached to the bungalow and the staff.

I did not request either the Hon. Speaker, Mr Karu Jayasuriya, or the Hon. Prime Minister, Mr Ranil Wickermasinghe, to permit me to continue to occupy the Opposition Leader’s Bungalow. Whatever action they took, they did according to their own will. The other facilities that have continued were also in terms of that decision.

Following the October 2018 Constitutional crisis, both the then Prime Minister, Hon. Mahinda Rajapaksa and the then Leader of the Opposition, Hon. Ranil Wickremasinghe exchanged positions, which happened at the same time.

My removal as the leader of the Opposition also occurred at the same time.

I have been saddened by what has happened. This ugly situation should not continue.

Sampanthan clarifies the issue of occupying an official residence