The advent of ITAK/FP a watershed in Ceylon politics

December 18, 1949, was a red-letter day in the political history of Sri Lankan Tamils known as “Ilangaith Thamizhar” in their mother tongue. On that day, a group of sixty Tamils including two parliamentarians and two senators launched a new political party with the avowed goal of establishing an autonomous State for Tamil-speaking people of Ceylon (as Sri Lanka was known then) within a united island. The new party was named in Tamil as “Illankai Thamil Arasu Katchi” meaning Ceylon  Tamil State or Tamil Government Party.

However, the party’s founders described it as Federal Party in English. According to renowned political scientist Prof. A.J. Wilson, the new party’s name was not Federal Party but merely an explanation of what the party stood for. “Its leaders insisted that the word ‘State’ denoted a unit within a federal set-up and not a sovereign State as some of its detractors alleged,” wrote Wilson in his book titled ‘Sri Lankan Tamil Nationalism.’ Unfortunately, this confusion in nomenclatures only resulted in planting the seeds of suspicion in the minds of many members of the majority community.

Officially, the new party was named in English as “Illankai Tamil Arasu Katchi” and became known by the acronym ITAK. In popular parlance, it was called the Federal Party or FP. S.J.V. Chelvanayagam was elected as the first president of the fledgeling party while Dr E.M.V. Naganathan and V. Navaratnam were the joint general secretaries. It was ITAK which introduced the demand for federalism into Sri  Lanka’s post-independence political discourse. The birth and growth of ITAK and its espousal of power-sharing through a federal arrangement introduced a vibrant and colourful phase into the island nation’s politics. Although 70 years have passed since the party was born, ITAK continues to remain wedded to the federal idea.

Currently, the premier political representative of Sri Lankan Tamil people is the configuration known as Tamil National Alliance (TNA). The chief constituent of TNA is ITAK or Federal Party. Apart from ITAK, the other two constituents of TNA are the Tamil Eelam Liberation Organisation (TELO) and People’s Liberation Organisation of Tamil Eelam (PLOTE). However, it is under the house symbol of ITAK that TNA contests elections. Moreover, the majority of TNA parliamentarians, as well as local authority representatives from the North and East, are from ITAK. Most members of the now-dissolved Northern and Eastern Provincial Councils were also of ITAK.

As stated earlier, the advent of ITAK/FP was a watershed in Ceylon politics as it was the first Tamil political party to incorporate the federal idea as its main ideology and goal. The new party wanted an autonomous Tamil  State comprising the Tamil-dominated Northern and the Tamil–majority Eastern  Provinces within a united Ceylon. ITAK wanted a federal union between the autonomous Tamil  State and the residual Sinhala  State. This column intends to provide some historical background details in this two-part article about how Illankai Thamizh Arasu Katchi was formed and why it raised the federal cry.

With World War II drawing close to an end, the prospects of freedom from British colonial bondage loomed large on the political horizon for the Indian sub-continent and its island neighbour Sri  Lanka known as Ceylon then. A commission of inquiry headed by Viscount Soulbury was sent in 1944 by Whitehall to engage in consultations with all sections of the population and compile constitutional reform proposals. This was known as the Soulbury Commission.

The political party system was slowly taking root in the island during the pre-independence years. The advent of the Soulbury Commission saw Sri Lankan Tamils forming the All Ceylon Tamil Congress (ACTC). G.G. Ponnambalam became the ACTC President while S. Sivasubramaniam was the party General-Secretary. The primary objective of ACTC at that point of time was to argue the case for its “fifty-fifty” demand before the Soulbury Commission. The Tamil Congress wanted a scheme of balanced representation popularly called “fifty-fifty.” According to this proposal, 50% of seats were to be allotted to the Sinhala majority and 50% for all the other minority ethnicities including Tamils. They wanted a scheme where the minority community representation was to be given weightage so that non–Sinhala communities together could counter-balance perceived Sinhala domination. This was rejected by the Soulbury Commission which refused to create an “artificial majority out of a minority.”

The Soulbury Commission report was incorporated as a “White Paper” and made public in October 1945. The report formulated a scheme awarding ‘dominion’ status for Ceylon and envisaged full independence to follow thereafter. The Ceylonese board of ministers accepted it with reservations. Subsequently, it was submitted in the form of a motion in November 1945 for approval of the legislature known as the State Council. If the motion were defeated, then the State Council set up under the Donoughmore Constitution would continue and self-government leading to full independence under a Dominion Constitution would be a distant dream.

The All Ceylon Tamil Congress held a special meeting where it was decided to reject the Soulbury report. It also resolved that all minority community members in the State Council should vote against the White Paper motion. Tamil Congress leader G.G. Ponnambalam went to London in a desperate last-minute effort to thwart the Soulbury Constitution being adopted.

The State Council motion was moved by D.S. Senanayake and seconded by S.W.R.D. Bandaranaike. Understanding the anxiety, doubts and fears of minority communities, particularly Sri Lankan Tamils of being dominated and suppressed by the Sinhala majority in an “independent” Ceylon, D.S. Senanayake who became known later as the “father of the nation” made an eloquent appeal. DS stated thus: “I do not normally speak as a Sinhalese, and I do not think that the leader of the council ought to think of himself as a Sinhalese representative; but for once, I should like to speak as a Sinhalese and to assert with all the force at my command that the interests of one community are the interests of all. We are one of another, whatever our race or creed.” Urging Tamils and other minority communities to accept the Soulbury Constitution, DS reached out to them in this manner: “Do you want to be governed from London or do you want, as Ceylonese, to help govern Ceylon? On behalf of the congress and on my own behalf, I give minority communities the sincere assurance that no harm need you fear at our hands in a free Lanka.”

While G.G. Ponnambalam was in the UK, the State Council motion was put to the vote. It was passed by fifty-five votes to three. The trio who voted against the motion comprised one Sinhalese and two Indian Tamils. They were Wijayananda Dahanayake who later became a Prime Minister and up-country Tamil trade unionists Natesa Iyer and I.X. Pereira. All Sri Lankan Tamil, Muslim, Malay, Burgher and European State Councillors had voted for the Soulbury Commission. The minorities including Sri Lankan Tamils had trusted Sinhala leader D.S. Senanayake and acceded to his appeal. This was a huge blow to the Tamil Congress in general and its leader G.G. Ponnambalam in particular. 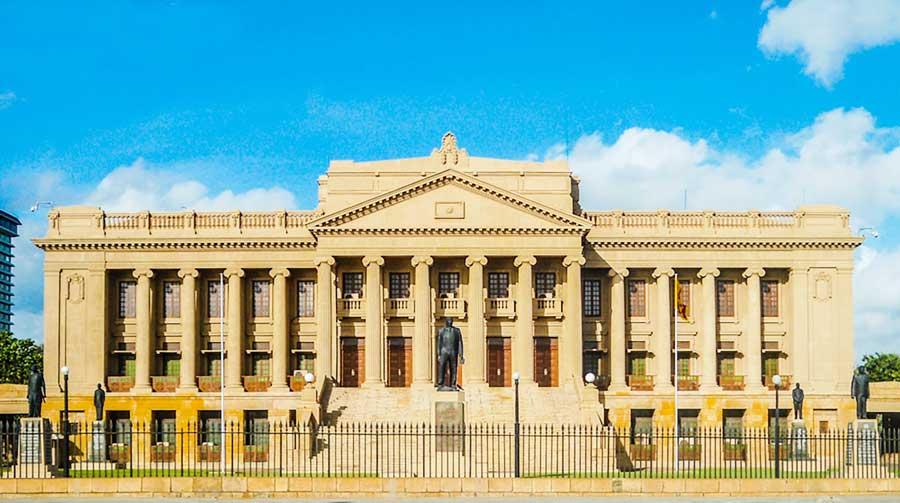 ELECTIONS TO HOUSE OF REPRESENTATIVES
The State Council was dissolved on June 4, 1947 and the general elections for the envisaged House of Representatives (Parliament) were scheduled for August 23 and continued until September  20, 1947. There were to be ninety–five elected and six appointed MPs. There would be eighty-nine electorates. Of them, a few like Colombo Central were multi-member constituencies electing more than a single MP. There was also to be an upper-house consisting of 30 senators. Parliamentary elections were duly held and results announced. The newly-formed United National Party (UNP) led by D.S. Senanayake won 42. The Lanka Sama Samaja Party (LSSP) led by Dr N.M. Perera won 10. The Tamil Congress led by G.G. Ponnambalam won 7. The Ceylon Indian Congress (as Ceylon Workers’ Congress was known then) led by Saumiyamoorthy Thondaman got 6. The Bolshevik Leninist Party of Dr. Colvin R. de Silva got 5. The Communist Party led by Dr. S.A. Wickramasinghe won 3 seats. The Labour Party got one with its founder-leader A.E. Goonesinghe being elected from Colombo Central. There were also 21 MPs who had contested as independent candidates and won.

The Tamil Congress was jubilant at the results. Prior to the elections, G.G. Ponnambalam had entered into an agreement with Indian Tamil leaders and assured them of unconditional support in safeguarding their citizenship rights in independent Ceylon. This was due to a campaign in the Sinhala areas against citizenship and voting rights to predominantly Tamil-speaking Indian immigrants working in tea and rubber plantations.

The Tamil Congress contested eight of the nine electorates in the Northern  Province and one out of the seven electorates in the Eastern  Province. The party also supported some independent candidates in the electorates it did not contest. The following were elected as MPs from the Tamil Congress; G.G. Ponnambalam – Jaffna; S.J.V. Chelvanayagam – Kankesanthurai; C. Vanniyasingham – Kopay; V. Kumarasamy – Chavakachcheri; T. Ramalingam – Point Pedro; K. Kanagaratnam – Vaddukkodda1 and S. Sivabalan – Trincomalee.
The prominent three among the former State Councillors who voted for the Soulbury Constitution and contested parliamentary polls lost. Sir Arunachalam Mahadeva and S. Natesan were defeated by Ponnambalam and Chelvanayagam in Jaffna and Kankesanthurai respectively. J. Thiyagarajah lost to a Tamil Congress-backed independent C. Sittampalam in Mannar. An elated Ponnambalam cabled the Colonial Office in Britain stating that election results vindicated the Tamil Congress’ stance on balanced representation. The Tamil Congress leader made an unreasonable demand that the Soulbury Constitution should be rejected outright and fresh elections under a different electoral system should be held.

UNP HAD ONLY 42 OF 95 ELECTED MPs
The prevailing political climate was uncertain as the first Ceylonese parliamentary elections had resulted in a hung Parliament. The D.S. Senanayake led UNP had only obtained 42 of the 95 elected MP seats. Along with six appointed MPs, DS could only form a minority government with 48 out of a 101-member House. Meanwhile, several different moves were afoot to form a non-UNP government consisting of the left parties, the Tamil parties and the independents.

It was against the backdrop of such a volatile political situation that D.S. Senanayake aided by Sir Oliver Goonetilleka engaged in a rare display of political statecraft to form the first parliamentary government of Ceylon/Sri Lanka.
To be continued…

D.B.S.Jeyaraj can be reached at dbsjeyaraj@yahoo.com