The UN Human Rights Council had adopted Resolution No.30/1 of October 01, 2015  and co-sponsored by Sri Lanka that called for an international investigation into war crimes with foreign judges, prosecutors and investigators.   Clause 6 of Resolution 30/1, inter-alia,  states as follows:

‘Welcomes the recognition by the Government of Sri Lanka that accountability is essential to uphold the rule of law and to build confidence in the people of all communities of Sri Lanka  in the justice system, notes with appreciation the proposal of the Government of Sri Lanka to establish a judicial mechanism with a special counsel to investigate allegations of violations        and abuses of human rights and violations of international humanitarian law, as applicable; affirms that a credible justice process should include independent judicial and prosecutorial         institutions led by individuals known for their integrity and impartiality; and also affirms in this regard the importance of participation in a Sri Lankan judicial mechanism, including the         special counsel’s office, of Commonwealth and other foreign judges, defence lawyers and authorized prosecutors and investigators.’

“I have shown the strength of my backbone, two weeks ago, the UN Human Rights chief had said Sri Lanka must have international judges in the accountability mechanism. The following day, I had the guts to dismiss it,” you said while addressing the Executive Committee meeting of your Sri Lanka Freedom Party (SLFP) held here on March 03, 2017. (http://www.pressreader.com/india/the-asian-age/20170304/281956017572621)

You have repeatedly claimed on public platforms that you have put an end to the arguments and discussions over the issue of bringing foreign judges for the proposed judicial mechanism to investigate the allegations of war crime and human rights violations by convincing the international authorities and its leaders that such process is not needed in Sri Lanka.

“We have more than enough specialists, experts and knowledgeable people in our country to solve our internal issues, this investigation should be internal and indigenous, without violating the laws of the country, and I believe in the judicial system and other relevant authorities in this regard.

“The international community need not worry about matters of state interest.  I will never agree to international involvement in this matter. This flies in the face of the recommendation of the UN High Commissioner for Human Rights that Sri Lankan establishes “an ad hoc hybrid special court, integrating international judges, prosecutors, lawyers and investigators”.

Though the President occasionally mentions about accountability and reconciliation between various communities, especially between the Tamils and Sinhalese, such political reconciliation is not possible unless members of the armed forces who committed war crimes are brought to justice.

“If communities that have been torn apart by decades of violence and impunity are to be reconciled, the Sri Lankan government should initiate internal reforms and seek international assistance to prevent ongoing violations and ensure real accountability for past abuses,” said Sam Zarifi, Amnesty International’s Asia-Pacific director.

There have been numerous massacres of innocent Tamil civilians during the war that lasted for several decades. A senior Sri Lankan army commander and the frontline soldier told Channel 4 News that point-blank executions of Tamils at the end of the Sri Lankan civil war were carried out under orders.  One frontline soldier said: “Yes, our commander ordered us to kill everyone. We killed everyone.” And a senior Sri Lankan army commander said: “Definitely, the order would have been to kill everybody and finish them off. I don’t think we wanted to keep any hardcore elements, so they were done away with. It is clear that such orders were, in fact, received from the top.” (https://www.channel4.com/news/sri-lanka-tamil-killings-ordered-from-the-top)

“Accountability for Violations of International Humanitarian Law in Sri Lanka stated, inter-alia, all parties to an armed conflict -both states and non-state armed groups -are responsible for complying with the requirements of international humanitarian law. That is, each party must respect and ensure respect for the laws of war by its armed forces and other persons or groups acting on its orders or under its direction or control. This obligation does not depend on reciprocity-parties to a conflict must respect the requirements whether or not the opposing side abides by it. It also does not depend on the reason for which the respective parties go to war, whether by a state (“fighting terrorism”) or an armed group (“ethnic homeland”). And all parties to an armed conflict must be held to the same standards, regardless of any disparity in the harm caused by alleged violations.

“A party to an armed conflict is responsible for serious violations of the laws of war committed by its armed forces and persons or entities acting under its authority, direction, or control. That responsibility, whether by a state or non-state actor, entails a requirement to make full reparations for the loss or injury caused; reparations can take the form of restitution (reestablishment of the prior situation), compensation (financial payment), or satisfaction (such as a formal apology or other action) to another state, entity, or individuals. As discussed below, states also have an obligation to hold accountable individuals under their control who are responsible for serious violations of the laws of war.( https://www.hrw.org/news/2010/05/20/q-accountability-violations-international-humanitarian-law-sri-lanka)

In this connection, I wish to draw your Excellency’s attention to the surrender of more than 200 LTTE cadres at Vadduvaakal on May 18, 2009 evening in the presence of several witnesses, including spouses, relatives and friends. The surrenders were told that they will be released after a short inquiry by the army. They were taken away in CTB buses including a Catholic priest Francis Joseph who accompanied the surrender. The whereabouts s of these LTTE cadres who surrendered on that fateful day is not known till now. Below is the partial list of LTTE cadres who were taken away on May 18, 2009.

(1)    K.V. Balakumar, journalist and his son Sooriyatheepan. A photograph showed both sitting on a bench in an army camp with a soldier seen walking behind.

(12) Piriyan, Head of Administrative Service Department and his family

(13) V. Poovannan, Head of the Administrative Service Division of the LTTE

Needless to remind the President that you were the acting Defence Minister during the last phase of the war that officially ended on May 19, 2009. More than anyone else, the President should know the fate of these LTTE cadres. If they are not in army camps then where are they now? If they are not among the living who gave orders to kill them? 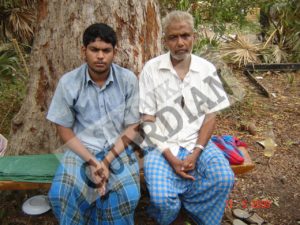 Sri Lanka, a member of the UNO, is bound to comply with all Conventions, treaties and other sources of international law. Sri Lanka cannot pick and choose at its whims and fancies.

In November 2009, General Fonseka notified the government that America’s Department of Homeland Security (DHS) had sought his testimony in a probe into alleged human-rights violations by Gotabaya Rajapaksa, Sri Lanka’s defence secretary and a naturalised American citizen. General Fonseka was hastily flown back from America on the day the DHS interview was to have taken place.

According to the 68-page report presented by the US state department based on US embassy findings, satellite imagery and aid agencies accounts, painted a bleak picture of civilian life in a war zone under constant bombardment and where the death toll was rising. According to the UN and human rights groups, between 7,000 and 20,000 civilians were killed in the north-east between January and May. The Report also alleged that government forces shelled civilian populations, hospitals and schools in the rebel-controlled territory, often in areas that had been described by the authorities as no-fire zones. (https://www.theguardian.com/world/2009/nov/02/sri-lanka-sarath-fonseka)

General Sarath Fonseka, the former Sri Lankan army chief claimed that top government officials were responsible for war crimes during the final phases of the country’s 25-year civil war in 2009. Obviously, he was referring to former Defence Secretary Gotabhaya Rajapaksa. (https://www.theguardian.com/world/2011/nov/18/former-sri-lankan-army-chief-jailed). At the height of war, Gotabhaya claimed that hospitals are legitimate military targets.

Fonseka himself accused of commanding troops that committed war crimes and crimes against humanity had admitted that hospitals treating unarmed Tamils during the war had come under Sri Lanka military bombardment.

It is interesting to observe that two ex-army chiefs Sarath Fonseka and Jegath Jayasuriya traded accusations each claiming the other committed war crimes. (https://srilankamirror.com/news/4713-sri-lanka-ex-army-chief-duo-trade-accusations-over-war-crimes)

So there is mounting evidence that the armed forces fought the war by jettisoning UN conventions and rules governing the conduct of wars.

Attempts by the President and the Prime Minister claiming that no war crimes were committed and war heroes will not be put on trial may fool the Sinhalese people, but it will not fool the international community.

Only an investigation into allegations of violations and abuses of human rights and violations of international humanitarian laws with foreign judges, prosecutors and investigators will clear the air.

Mr. President, What Happened To The LTTE Cadres Who Surrendered To The Army At Vadduvakal On May 18, 2009?