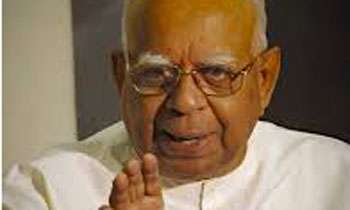 While claiming that the International community could not be a spectator anymore with regard to Sri Lanka, Leader of the Opposition and the Tamil National Alliance R. Sampanthan said today if the Government continued to fail in its commitments, the International Community must clearly state its position on follow up mechanisms to safeguard the victims and ensure non-recurrence of the past.

He told this during a meeting with the visiting United States House of Representatives Armed Services Committee Delegation led by McClellan Thornberry in Colombo today.

He briefed the delegation on the current political situation in the country and emphasized the importance of both President and Prime Minister working together in order to find solutions to fundamental issues and taking this country forward.

“We are unhappy about the way the country is progressing,” Mr Sampanthan told the delegation.
Answering a question Sampanthan said, that “the majority of the people in this country were willing to address the national issue once and for all.

“Some Sinhala political leaders are trying to satisfy the hardliners than being just and equal to all people in this country, they cannot go on this path forever, it will only end up in history being repeated,” Sampanthan said.

“Especially the President and the Prime Minister must go to the Sinhala people and genuinely explain the need for a new Constitution. Since 1988 every successive Government and President have made several attempts to change the present Constitution, therefore, this should not be a difficult task for the majority of Sinhala people to understand,” he added.

He said that they wanted a solution within a United, Undivided and Indivisible Country and added that the power-sharing arrangements should be in accordance with the international covenant on Civil and Political Rights, International Covenant on Economic Social and Cultural Rights and the Universal Declaration of Human Rights.

Expressing his concerns on the stalled process of drafting a new Constitution Sampanthan said that a new Constitution would pave the way to solve many issues that this country has faced including the heavy debt and economic prosperity, and therefore this effort cannot be abandoned.

He said that the legitimate demands of the Tamil people in finding a lasting solution to the national question could only be addressed through adopting a new Constitution.

Sampanthan highlighted that his party was confident that if the Constitution were passed in Parliament with a two-thirds majority it would be approved by the people at a referendum, which was necessary for a new Constitution.

“We may have to rethink and our people will be forced to rethink our position if things do not go well and if things are not achieved within a certain timeframe,” he said.

“The Government of Sri Lanka has given a Commitment to fully implement the UNHRC resolution adopted in 2015 before March 2019. It must fast-track the process to achieve those commitments,” he told the delegation.