Sri Lanka’s main Tamil party TNA has demanded concrete action from President Maithripala Sirisena on disclosing the whereabouts of their relatives who are still missing eight years after the end of the country’s nearly three-decade-long civil war. 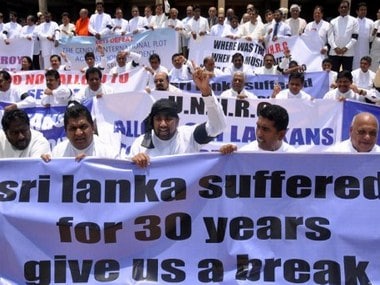 In a letter to Sirisena, main Tamil party leader Tamil National Alliance (TNA) and the leader of the Opposition R Sampanthan demanded the government disclose names of all the detainees and the places where they were being held beside allowing their relatives to visit them.

He said the issue of missing persons was a “serious issue” and relatives of the disappeared persons in the north and east had called for revealing the names of all those held in custody when they met Sirisena at a previous meeting.

Referring to the Office of Missing Persons (OMP) which is due to become operational soon, Sampanthan said he wished the issue of the missing persons would be credibly dealt to ensure relief for the families.

Sirisena signed a gazette on the OMP last week, paving the way to set up an office to trace around 20,000 people still missing due to the civil war.

The OMP was set up as a response to UN Human Rights Council’s resolution which called for credible international mechanism to probe the alleged war crimes committed during the last phase of the civil war. The UN has lauded Sri Lanka for setting up the OMP, terming it a “significant milestone” for all searching for their loved ones.

The government now faces pressure to make the OMP operational and nominate and appoint its members soon. According to the government estimates, around 20,000 people are still missing due to various conflicts including the 30-year-long separatist war with Lankan Tamils in the north and east which claimed the lives of at least 100,000 people.

The Liberation Tigers of Tamil Eelam (LTTE), which led the separatist war for a separate Tamil homeland, was finally crushed by the Lankan military in 2009 with the death of its supremo Velupillai Prabhakaran.