Better Have Even A Tamil President? What’s Wrong With That Abayatissa Hamuduruwo?

Today’s demographic reality is such that the Sinhala people, despite their majority status, cannot sustain themselves without the free cooperation of the Tamil and Muslim people. Either we go it together or we go bust. On the contrary, what leaders like Abayatissa Thero and other Sinhala right wing extremists seem to be telling the minorities are: “you join us, but remember we are in charge.”

A report appeared in the Island (25/10) that Revd Dr Medagoda Abayatissa of the Sunethradevi Pirivena has declared, “it is better for the country to have even a Tamil as President than to be divided.” He said this addressing the media at the National Library and Documentation Centre.

Yes, Revd Dr Abayatissa. What ever could be wrong about having a Tamil as President? The term,”even,” in your assertion suggests that to pick a Tamil is not quite right and, maybe, only an unfortunate last resort. Why? 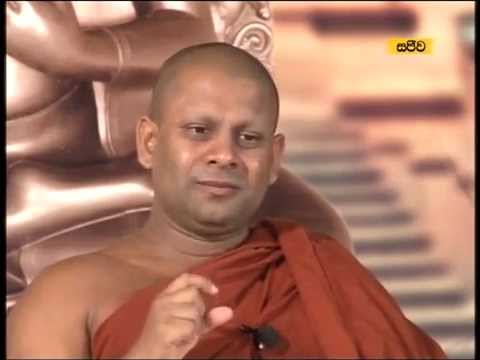 Hasn’t anyone told you about the pivotal role played by our Tamil and Muslim brethren in the struggle for independence from the colonial masters? Ponnambalam Ramanathan, Ponnambalam Arunachalam, TB Jayah, M.C Siddi Lebbe and others who fought along with Sinhala leaders to convince the British that our island can be governed as one entity. For hundreds of years these people have been living together with us sharing, caring, and contributing toward our island. Contrary to your prejudice, isn’t it a wonderful thing to have a Tamil as our President? A great and wise move that heals? Remember how Pandit Nehru went up to Ali Jinnah and beckoned the latter to be India’s first Prime Minister? Nehru made this gesture  when Jinnah was planning a break-away Pakistan. Is this kind of move not in your  political vocabulary?

Or is it that you really think our minorities are inferior specimens? In the name of Buddhism-leave alone common sense-  please educate us? Buddhist teachings are unfaltering about man’s equal biology and equal human rights. Have you heard of the four Brahma Viharas that the Buddha urged his followers to practice; not merely to practice, but to build into their lives? Metta (sincere friendliness) is the primary of them and Karuna (compassion) follows Metta. You don’t seem to follow either. Second, your historical memory of how our country got independence obliterates the pivotal role of Tamil and Muslim leaders in that struggle.

The ‘Bring Back Rajapaksa Campaign,’ commenced on the feet of the defeat of Mahinda Rajapaksa. The Rajapaksa family and cohorts of various ranks and levels who enjoyed a decade of financial benefits from the franchising of corruption throughout the island banded together as they had to smell the impending danger. Evidently and surprisingly, government has been in no hurry to make them meet their ditta dhamma vedaneeya karma. These Rajapaksians, on the other hand, had more politically savvy than the government and they thought it best to keep the heat up. A new device of serially constructing phobias followed.

Monster bogeys were created but they have all flopped with the passing of time when events belied the false charges. Came the security question first: “Our country’s security is in serious danger,’ was the slogan. We now know it is not. Then, came the ‘selling the country bogey.’ That could not be sustained as people have been made to realise that no selling, really, has taken place-certainly not up to the level the previous regime sold. Government managed to get the upper hand in countering the move. A rare toughness was demonstrated there. Next, came the bogey about the protection clauses for Buddhism being taken away from the proposed constitution. That, too, hissed out-although not like soda. Now, it is the heightened campaign that the island is to be divided, devolved, and delivered to the Tamils and Muslims on a platter!

This last bogey harks back in a sinister way to the pre-LTTE Sinhala communal campaigns. It gives me a déjà vu feeling that I am, sometimes, frightened about because if that communal fire is re-ignited and recycled what we have gained after a thirty-year long war would go down the drain and Sri Lanka will be doomed forever as though a kind of Noah’s flood has drowned it into history. In that event one can be sure India and the global powers will back a secession. Today’s demographic reality is such that the Sinhala people, despite their majority status, cannot sustain themselves without the free cooperation of the Tamil and Muslim people. Either we go it together or we go bust. On the contrary, what leaders like Abayatissa Thero and other Sinhala right wing extremists seem to be telling the minorities are: “you join us, but remember we are in charge.”

My fear is awakened as the campaign could have a visceral and gut-penetrating impact for those among the public- at -large who maybe drawn to it. The question is will the masses be drawn to it this time? Will mass emotion hijack mass commonsense? Strangely, certain middle class elements have joined the bandwagon. These are segments of the population who are typically educated. Observing the Diaspora emails I get, it is not hard to find professional persons and educated persons lining up to fan the smouldering coal; to keep the fires on. I get foul-smelling emails from these guys.

The positive signs are that the campaign isn’t penetrating the broad masses like last time. It is more articulated and more organised; it employs the devices of digital media and it is active in social media; it is all these because moneyed and skilled professionals are behind the campaign, yet it is failing to spread. This is evident and this is the fault line that government must exploit. The absence of a charismatic leader is also a weak spot in their armoury. MR looks tired more than inspired and he doesn’t convince. People are listening less and less to him. The daily exposures of his and his clan’s misdemeanours while in office  are eroding the once mythical popular faith in the Rajapaksa’s. For a brief moment people asked, ”how about Gota?’ But the latter’s future is in the balance as one needs to know whether that future will be (Athule) “inside,” or “outside.”

Be that as it may, we see before us the new version of the “nation saving campaign.” Here, “ nation,” of course means the Sinhalas- with the manaapaya for Sinhala Buddhists. Monks of Mahinda are out as the monks of SWRD came out in 1956. Bodu Bala Sena Commander-in-Chief  did his job trying to stir anti-Muslim feeling and he is in low key now; the law-enforcers are behind him. It was real drama watching this man behave raucously. The Buddha would have identified him as part of the Maara Senawa. So were many of the younger yellow-robes he had got together. Two holy blokes were arrested for invading the safe house where Rohingya refugees were kept. What Buddhist compassion they displayed toward a most vulnerable  and helpless lot of people! Well, that is the Buddhism of racism or jaathyaalaya. One man in robes was found to be a paid layperson!

Now, we have a new monk -star emerging. He is Revd Dr. Medagoda Abayatissa. Like Revd. Uduwe, who is charged for illegally keeping elephants, this guy is handsome. Wonder if he goes for facials as Revd Uduwe is supposed to have done?  Abayatissa Thero has, luckily for us, identified himself already and we know on which side of narrative he is. He is a founding member of Gota’s Viyathmaga. Later, he added to his pro-Gota portfolio another organisation called “Eliya.” All evidence Abayatissa Thero runs behind Gota or the other way about or both are running behind each other. With Gota not yet cleared of charges of major fraud and of having  Gestapo-style hit-squads under him during his mighty days, this association raises eyebrows. For our purposes, however, this information is welcome as we are able to identify the monk’s agenda.

The official line adopted by these elements is that the proposed devolution would be on an ethnic basis. I haven’t seen the proposals yet for the simple reason they are not yet finalised.However, these protagonists of Rajapaksa have telepathic powers and they know before hand. If devolution is proposed it is impossible to do that on ethnic lines. How could you? Tamils and Muslims are scattered all over the island. I don’t think the government will be willing to pick them up from where they are and place them in separate territories. What about devolution of powers to the North and East, one may ask. That does not constitute ethnic devolution by any stretch of imagination. There maybe predominantly Tamil populations in the North and the East maybe dominantly Muslim. On the other hand, there are Sinhalese and Muslims in both territories and there is no proposal to restrict the devolved territories to specific ethnic groups; it isn’t practical to do mad things like that. The demographic inflow and outflow will continue naturally. Sinhalese who are the majority islandwide will be temporary minorities in these devolved regions. However, Island-wide they are an overwhelming majority. So what?

Besides, the key questions relate to the depth of devolved powers and not the territory. This has not been discussed yet; nor does Abayatissa Thero able to forecast that. Another moot point is that the devolved territories will have to depend on central government for funds. This has happened to the prevailing devolved territories. Dependence on the centre means control by the centre and surveillance by the centre. Doesn’t the learned Dr monk not know that simple practicality?

They are in Business

These considerations demonstrate that there is no factual or rational reason for this orchestrated push against Constitution reforms. The government had received a mandate from over 62 lakhs of voters to change the constitution. It must carry out its promise in the name of democracy. This is peoples’ sovereignty. This is what we want. The sovereignty that rests with the people cannot be grabbed by the Mahanayakes, Revd Dr Abayatissa, the Bellanwila Chief priest, or any others.

The monks know all this. They know the facts. Yet, they are in the campaign. It is just that they have another script for a game of their own. Knowingly, they sing another song. The naked reality of the campaign is clear. It is a resumption of the ‘Bring Back Rajapaksa,” movement. Viyathmaga, Eliya, or whatever follows in that vein are all the same. Big wigs under threat of soon facing court are hell-bent on sabotaging the trials and returning to their perks. Officials who once hanged around them for handsome remuneration are working. Many of them are to face court. As we know out of past experience, there is a lot of money in this Jaathyalaya business. When in power, they feathered their nest in incredible manner. They squandered state money, stole, and murdered.Where there is money, backers gather. Sri Lanka has  a new political class derived out of  commercial patriotism. A patriotism that exchanges and is bought and sold in the marketplace of evil-minded men.

*The writer can be contacted at sjturaus@optusnet.com.au