Mullaithivu with a population of 130,000 has an estimated 60,000 security forces with 1:2 force to population ratio

It is time, the Sinhalese and Tamils realize that peaceful coexistence is infinitely preferable

Although the war has ceased, animosity and distrust between communities have not ended

“On either side of a potentially violent conflict, an opportunity exists to exercise compassion and diminish fear based on recognition of each other’s humanity. Without such recognition, fear fuelled by uninformed assumptions, cultural prejudice, desperation to meet basic human needs, or the panicked uncertainty of the moment explodes into violence.”
~Aberjhani, American historian. 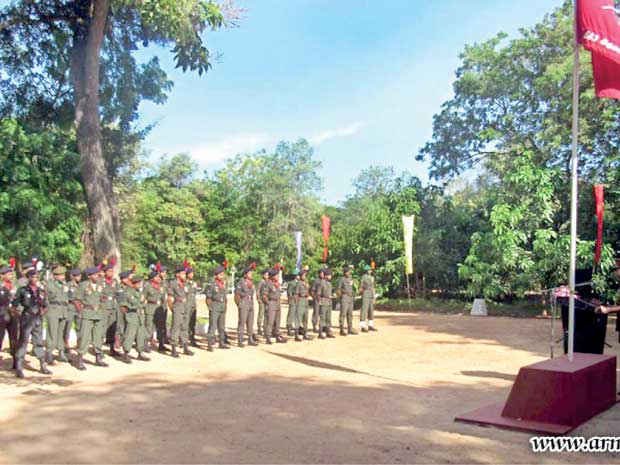 The Executive Summary of a new report contests the government’s demilitarization process and reveals, ‘Mullaithivu district, with a population of 130,000 has an estimated 60,000 security forces, giving it an extremely steep (1:2) force to population ratio’. If the contents of the said report are true and accurate, the resultant socio-ethnic undercurrents would be unacceptable and an eruption of unwanted preconditions to another blow up inevitable. One uniformed soldier for every two civilians in the district is, in essence, a military cantonment. One couldn’t get a more effective purveyor of unfriendly news (which Donald Trump, US President, calls ‘fake news’).

Ceylon used to be a land where the faith one believes in or the language spoken and the cultural traditions one followed did not matter when friendships were bonded, community mix was intended and common political ends were fought for. Yet when histories of each community are thrown into this mix, that common bond disappears; those who still hold on to that bond seem more and more

reactionary in their minds and the community as a collective mindset fast approaches a breaking point; the devastating effect that this breakdown of communal harmony is widespread amongst all communities. There does not seem to be any long-term resolution to this breakdown of the friendly bonds that existed among these communities. However, there do exist friendships, personal bindings and harmonious acquaintances and relationships among individuals but such alliances are not accepted in the wider realm of community-reconciliation. The Sinhalese community simply cannot equate these individual relationships between Tamils and themselves as a wider reconciliation between the two communities and disregard the legitimate grievances the Tamils clamour about.

It is in the context of the hallucinated triumphalism and false sense of Aryan-based superiority of the Sinhalese-Buddhist psyche, the real and imaginary Tamil grievances come to life. In the absence of a sincere and sturdy commitment from the political leadership of Sinhalese Buddhists, any utterances and declaration from atop platforms and other fora would look like empty rhetoric and an aimless journey into the wilderness of political anarchy and socio-ethnic doom. Although the war between the Liberation Tigers of Tamil Ealam (LTTE) and Sri Lankan security forces has ceased, the animosity and distrust between the two communities have not ended. On the contrary, a deep-rooted anger has set in. One day it might again find a violent expression of ethnic hatred and racial enmity as it did in the recent past. Such socio-ethnic dynamics do not occur in a vacuum. The majority consisting of Sinhalese Buddhists and their political and religious leadership have to bear a great degree of responsibility for the agonies brought upon the minority Tamils. When such violent destruction was caused to ethnic groups, in terms of modern neo-liberal thinking, such actions are branded in the most dastardly lingo naming and shaming, quite unjustifiably so, as genocide, pogroms and ethnic cleansing, the situation is clearly out of control. The spirit of ethnic harmony, the spirit of racial parity and the fundamental sense of social fairness become mere words expressed by politicians whose very existence depends upon the flaming of violence and discord of different ethnic groups.

The developing situation in Mullaithivu, as per the Executive Summary of the said report, may very well be a breeding ground for such social spite. Cruelty visited upon one ethnic group by another cannot be condoned, nor should it be encouraged for political advantage. As was stated in my earlier paragraph, such conditions do not manifest themselves in a vacuum and the context in which such conditions appear needs to be changed as the very context is a result of a state of mind created wilfully by vested interests whose parochial politics has dictated, that in politics, winning is not everything but it is the only thing. Politicians of today are beyond repair.

Their ingrained interest in perpetuating themselves in power, not as a vehicle for service of man but solely as a means to a more wholesome and wealthier end has destroyed their souls and injured their legacy. Callous disregard and apathetic approach to the voters’ needs and demands are finding unkind expression on many a field. The private sector that is totally reliant upon the bones and residue that politicians throw at them are even worse than the government sector-executives and managers. The entire system is rotten and it is showing at every layer and level of each and every socio-economic structure that is in place.

It is in the context of the hallucinated triumphalism and false sense of Aryan-based superiority of the Sinhalese-Buddhist psyche, the real and imaginary Tamil grievances come to life

This is the cruel truth that we are grappling with today. Today’s television channels are no more interested in conveying the truth or factual state of affairs. They are wilfully engrossed in making and breaking politicians. This warped mindset is dictating what is fit for screening and what is not. Against such a tortuous backdrop, when one reads the Executive Summary authored by Adayaalam Centre for Policy Research (ACPR) and People for Equality and Relief in Lanka (PEARL), the following part of the report stands out: ‘The consequences of such omnipresent militarization are widespread. Tamils must fear for themselves and their children as they encounter security forces on roads, in markets, and in schools while their community development is continuously obstructed. Trust within Tamil communities is inhibited by uncertainty over who may be reporting to the military. The military’s extensive presence inhibits freedom of speech and freedom of thought, since the military’s shadow hovers over all political activities, suppressing engagement in civic fora. It has become so engrained in Tamil society in the North-East that it no longer needs to be visibly seen for its presence to affect the community. The normalization of the military’s presence in various aspects of life in the North-East has led to Tamils internalizing this oppression’. It shows a sure way to another build-up of a terrorist force in the North. Such militarization leads to a physical response from the indigenous population and is prone to defining the issue as a moral contest fought between an overwhelming military force and an oppressed minority. Such easily palatable sloganeering would lead to prolonged clashes. The gates of the Temple of Fairness are being threatened to be broken. The Broken Palmyra is no more of rhetorical value.

The Mullaithivu populace will have a very legitimate and valid case against such an imbalanced ratio of 1 is to one, military personnel are to civil population. As time passes by, the very physical presence of the army, when taken for granted, would be able to exercise enormous influence and pressure leading to a varied plethora of give-and-takes; such give-and-takes would be inevitably facilitated by bribery and other corrupt practices such as flesh for money etc. These inevitabilities are not able to be anticipated but when the situation demands, the very dynamic of these dishonest processes takes a stranglehold of the doers of the deeds. When the process reaches the plateau of a ‘comfort zone’, a chain of acts and deeds would be born out of sheer necessity. This is the same process that created the current course of culture that has engulfed our population in the rest of the country. A proud people who produced such civil servants, academics, engineers and doctors are being held hostage 21st-century-kind so to speak. Yet we see an emerging investor class, mostly in the hospitality field, all over Jaffna and its suburbs. The Chief Minister seems to be profoundly embedded in the classical Tamil culture, confidence that he asserts and the equally eloquent expression of his true feelings and lending an aura of assurance and arrogance bordering on being condescending at times.

But the findings of the report that we are discussing will undoubtedly pivot this towards what the Army has to say in their defence. Phony patriots apart, there might be extremely valid reasons behind such a concentration of security personnel being present, if true, in Mullaitivu. The last thing the government and its security forces want would be random occurrences of violence, from whichever quarter they may erupt. Yet it’s incumbent upon the powers that be to explain to the curious public the real facts and question the veracity of the Report in discussion. Sri Lankans are very adept in procrastinating action when they are staring in your face. Despite that highly intolerable characteristic attributable to most of those who occupy higher echelons in the Administration, this Report surly must have been a subject that it discussed at its weekly Security Council Meetings.

Mullaithivu is not another country. It is very much part and parcel of our motherland. Its population consists overwhelmingly of Tamils. The war is over. It is time, we, Sinhalese, as well as Tamils realized that peaceful coexistence is infinitely preferable to conflict-ridden living.

The writer can be contacted at vishwamithra1984@gmail.com