Black July The absence of the collective guilt

This year marks the 34th anniversary of the July riots of 1983 which reshaped the socio political history of our nation forever. Many still recall the grim images of gutted buildings, vehicles set on fire and bodies charred beyond recognition. The damage the Black July did cannot simply be evaluated in terms of physical casualties or monetary terms.  It split the body politic with an incisive divide in to North and South, an abyss un-bridged to date.
The July riots became the catalyst for the upsurge of Tamil militancy and pushed the Tamil society in to the bosom of the murderous LTTE, sparking a smouldering Civil war which raged for 30 years and launching the Tigers to international recognition as the sole representative of the Tamils.
Hundreds of Tamil civilians lost their lives, while tens of thousands lost all they had on earth to be followed by an exodus of citizens to foreign countries. Very few have returned and very few will. The blame put on some chauvinistic ministers of the then regime who are dead and gone now, and everything else swept under the carpet. Three leftist parties including the JVP were proscribed. The end of the civil war has not ensured harmony between the two communities and mutual distrust and apprehensions about each other’s motives lurk underneath. We are not the only country to emerge out of ethnic conflict and yet why are we unable to bring these two communities, who are not at war any more, together, begs answer.

Among many reasons the one that I hold as the most crucial is the lack of remorse and absence of an apology shown by the Sinhalese Majority to the minority that was victimized in the July pogrom. We have not apologized for the gruesome murders, rape, arson, robbery, torture committed by 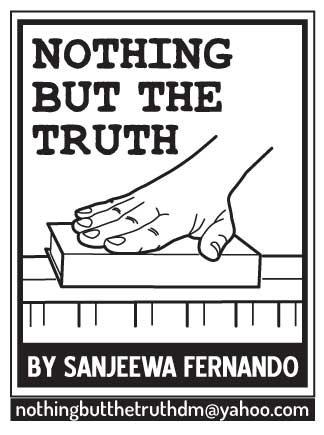 chauvinistic elements of the majority, abetted by authorities and applauded by many non-participants. Who apologized for the total collapse of the law enforcement machinery during those few days? Have we rectified the absolute lack of restitutive measures including legal ones to vindicate the victims? The commission established, albeit belatedly, by the People’s Alliance government to inquire in to and compensate the victims has led to nothing tangible.Who is the perpetrator punished and which the political bigwigs are held accountable as the orchestrators of this repulsive act of pogrom? Answers to all such questions remain negative. In fact, would it be outrageous if I ventured to utter that we identified ourselves more with the perpetrator rather than the victims?
Why is it that at all times of political and civil unrest our criminal justice system with its law enforcement apparatus comprising of the Police, Law courts, penal regime etc. seem to petrify? This is applicable not only to the Black July, but also to the JVP insurrections as well as the last stages of the civil war as well. Is it due to a technical or structural insufficiency of these institutions or is it more an inherent lackadaisical attitude engraved in our psyche that might is right and nothing could be done about it?

Paralysis of the criminal justice system

The absolute failure of the security apparatus was highlighted in the plight of the Tamil political prisoners, at Welikada prison, where despite being in the heart of Colombo, the Police or the Security forces failed to prevent murder. Why has not the court system been able to prevail and proper inquiries done and perpetrators brought to justice under the criminal laws of the country? The inquest held at the prison premises hit a dead end. Is the Penal Code being the main statute defining crimes bereft of provisions for each and every offence committed in broad daylight? Or are we saying that the law is applicable only when it comes to apolitical deeds and not otherwise? Is the rule of law a mere figment of ambitious imagination and mere rhetoric?
The July riots were horrendous to a civilized mind; yet the apathy and inaction of the majority chills the conscience.The failure of the justice system is mind boggling as murderers, rapists and robbers walk the streets untouched, although obviously aged and bent, even today.

“The July riots became the catalyst for the upsurge of Tamil militancy and pushed the Tamil society in to the bosom of the murderous LTTE, sparking a smouldering Civil war which raged for 30 years and launching the Tigers to international recognition as the sole representative of the Tamils” 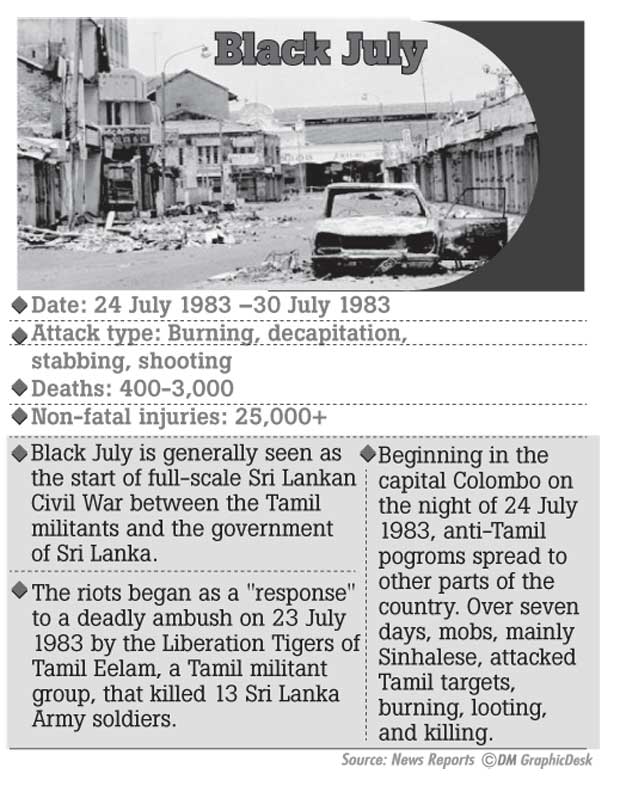 Jennifer Lind in her book “Sorry States” recognizes acknowledgement of past misdeeds essential for a genuine reconciliation after war. Given to the blame game of ‘’them’’ instead of “us”, we have evaded the most glaring and immediate spark that led to the civil war. The Germans reconciled themselves with the Jews not by evading the obvious but by revisiting each and every act, place and atrocity attributed to Nazism with a view to reconciling themselves. It is not the Jews who have preserved concentration camp sites as lessons for the future but the German authorities. That, I believe speak volumes for the genuineness of the reconciliation with and reabsorption of the victimized component of the population back to the states citizenry.

“The July riots were horrendous to a civilized mind; yet the apathy and inaction of the majority chills the conscience. The failure of the justice system is mind boggling as murderers, rapists and robbers walk the streets untouched, although obviously aged and bent, even today”

Norman Schultz, an expert on critical thinking and ethical theory, in his thesis called ‘’Apology and Forgiveness” claims a genuine apology not only to be an admission of a mistake but also “a reversal of previously held views or policies”. That emphasizes that an apology, even if it becomes a reality, still has to be organically linked to a general turning point of the psyche of our civil society in recognizing  ‘collective guilt’ in relation to catastrophes of this nature and not yet another formality.
We brandish lofty words like reconciliation, racial and ethnic harmony as well as reassuring terms as rule of law, due process, restitutive justice, etc. now more than ever. Yet reconciliation as well as a genuine will to that end remains as illusory as ever. Let the Black July become a rally point, not an embarrassing debacle to evade and ignore, to show a genuine will as a nation for a society that each and every citizen, irrespective of his race, religion, caste or creed truly enjoys the equality before law that our Constitution enshrines in unequivocal terms.