In the sea of world politics, it is a norm that the big fish eats the small fish. For small States, sovereignty is a myth. When the six-member Gulf Cooperation Council (GCC) was formed in 1981, some Arab analysts saw it as an attempt by Saudi Arabia to swallow up the small emirates on its eastern borders. 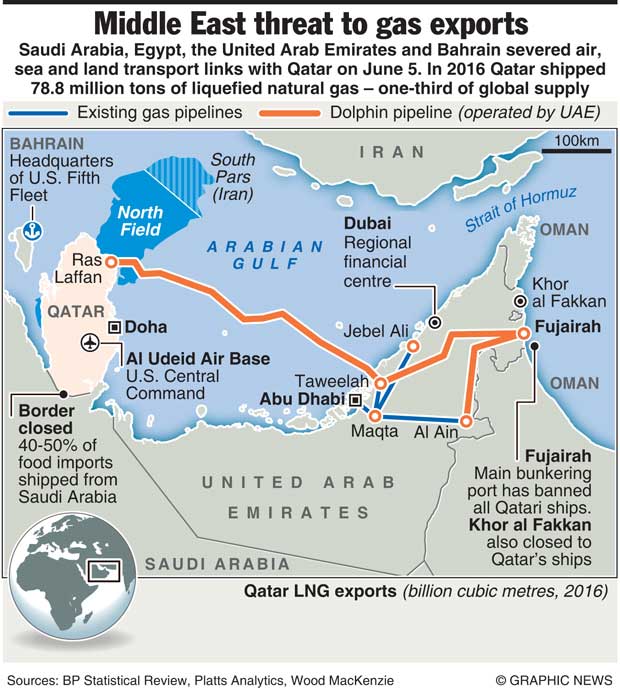 In effect, the GCC is a Saudi-led defence bloc, as much as an economic bloc. Since the 2011 Arab Spring shock, Riyadh has resorted to aggressive and assertive diplomacy to maintain the Saudi-led political order in the troubled Middle East. For disobeying its dictates, Yemen is paying a huge price. Kuwait, the United Arab Emirates (UAE) and Bahrain have genuflected in tribal style to the Saudis — but not Qatar and, to some extent, Oman. The two nations maintain friendly ties with Iran, largely for economic reasons, and have refused to endorse Saudi Arabia’s anti-Shiite hatred.
In January last year, when Saudi Arabia wanted all GCC members to sever ties with Iran, following a mob attack on the Saudi embassy in Teheran, oil-and-gas-rich Qatar only recalled its ambassador, without severing ties with Iran. Qatar feels it needs to maintain good relations with Iran for it to jointly explore the North Field-South Pars gas fields in the seas between Qatar and Iran. (See map)
Qatar, which has a history of troubled relations with Saudi Arabia, has been asserting its political independence in recent years, much to the chagrin of Riyadh. Qatar’s outreach to Iran and its support for Egypt’s Muslim Brotherhood have infuriated the Saudis. Moreover, the relatively independent reporting of the Doha-based al Jazeeera has also been a bone of contention.
The Qataris also resent Saudi Arabia’s interference in their internal affairs. Border disputes and a Saudi hand in palace coups have also soured relations. Against this backdrop, Qatar saw an opportunity in the Arab Spring to put in motion a Middle Eastern order scripted by it. It supported the Arab Spring, while Saudi Arabia, shocked by the courage of the Arab masses, feared a similar uprising in the kingdom. To say

that Saudi Arabia is no lover of democracy, is an understatement. It chops off the head of democracy at first sight, just as it chops off the heads of dissidents such as Sheikh Nimr al-Nimr, the leader of Saudi Arabia’s Shiites, who make up 10 percent of the population. His crime was demanding democracy and political reforms, just as the Americans demanded a greater say in government, when they rose against the Brits in the 1700s, shouting “No taxation without representation.”
Neither is Qatar an advocate of democracy. While the Saudis unsuccessfully tried to prop up the autocracy of Hosni Mubarak, Qatar’s support for Egypt’s Arab Spring and the Muslim Brotherhood, which was elected to power in Egypt’s first ever democratic elections, was largely geopolitical. With Egypt under its wraps, Qatar set sight on regime change in Libya, providing arms and money to anti-Gaddafi rebels, some of whom were al-Qaeda affiliates and foreign fighters. No sooner the Muammar Gaddafi regime was overthrown than Qatar targeted Syria for the next regime change exercise. The lightning speed with which Qatar moved from one theatre to another gave the Saudis little time to respond or check the high-riding Qataris and the growing popularity of the Muslim Brotherhood across the region. Qatar’s plan was to open, via Egypt, a support and supply line to the Syrian Brotherhood which, having fought a rebellion against Damascus in 1982, was the most powerful dissident group in Syria.
When the dust settled on the Arab world after the Arab Spring upheaval, Saudi Arabia, together with the UAE, rolled out their plan to oust the Brotherhood government in Egypt. Although the United States was seen adopting an equidistant policy, vis-à-vis the Saudi-Qatari rivalry, it discreetly backed the Saudi moves. This was because the Brotherhood government looked east towards Iran and China.
Qatar poured in billions of US dollars to help Egypt’s Brotherhood government overcome its economic woes. But, secret US-Saudi counter-moves contributed to the early collapse of the Brotherhood government and the return of the military in civilian garb, with pseudo democratic credentials.
In Syria, Qatar continued to support the Brotherhood, while the Saudis, it is alleged, relied on Al Qaeda- and ISIS-backed groups to topple the Syrian government. Leaked Hillary Clinton emails also confirm Qatar’s and Saudi Arabia’s links with extremist groups. Hence, the Saudi accusation that Qatar supported terrorism smacks of hypocrisy of the worst order. On Wednesday, Wahhabi/Takfiri terrorists struck in Iran, much to the glee of the Saudis and Washington. Donald Trump’s White House said in a statement: “We underscore that States that sponsor terrorism, risk falling victim to the evil they promote.” Of course, such a statement can be said of 9/11 and the recent acts of terrorism in Europe.
In March 2014, the rift between Saudi Arabia and Qatar reached its nadir, with Qatar facing a crisis similar to what it experiences now. Saudi Arabia, Bahrain and the UAE recalled their ambassadors from Qatar, while Riyadh even threatened to impose a sea-and-land blockade, forcing Qatar’s young emir Tamim bin Hamad Al Thani to mend his country’s policies to placate the Saudis.
The present crisis appears more serious than the 2014 fallout. The Saudis and their vassal States, including the tiny Maldives, have severed ties with Qatar and imposed an economic blockade, after accusing it of supporting extremism.
The tough punitive measures followed reports—the result of an alleged hacking of the Qatari news agency—that the Qatari emir cautioned allies against confrontation with Iran, and defended the Palestinian resistance group Hamas and Hezbollah, a Lebanese Shi’ite movement allied with Teheran.
Incidentally, the Saudi-led moves followed email leaks that exposed the UAE’s back channel ties with Israel. The leaks broadcast through Al-Jazeera said the UAE’s US ambassador maintained close relations with pro-Israeli think tanks in the US. It is no secret that the policies of Saudi Arabia, the UAE and Israel merge well with regard to their hostility towards Iran. It is noteworthy to mention that Israel was quick to welcome Saudi Arabia’s moves against Qatar. Besides, the Saudi foreign minister has insisted that Qatar sever its links with Hamas, if it wants the kingdom to normalise relations.
The shenanigans are as shocking as they are treacherous. Israel occupies the Palestinian land, including Jerusalem—and the custodian of Islam’s holiest shrines wants Palestinian freedom fighters penalised. The noble King Faisal, who restored Saudi pride with the oil boycott of 1973, in retaliation to US support for Israel, must be turning in his grave.
Given the Trump administration’s Saudi bias, Qatar, which is home to the biggest US military base in the Middle East, has no option but to surrender before the might of the Saudis, and be a Bahrain. It appears there is no end to the flow of the Middle East’s troubles.