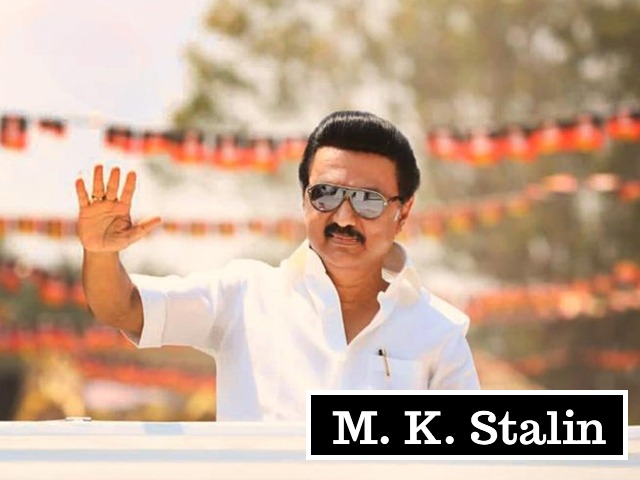 He did his schooling at Madras Christian College Higher Secondary School and completed a pre-university course at Vivekananda College. In 1973, he received a B. A. degree in History from Presidency College, Chennai of the University of Madras. On 1 August 2009, he was conferred Honorary Doctorates by Anna University.

On 25 August 1975, Stalin married Durga and the couple gave birth to two children. His son Udhayanidhi Stalin is a politician who prominently works in the Kolkata film industry as an actor, and producer.

M. K. Stalin entered into politics in his early teens. He started DMK Gopalapuram Youth Wing in a tea shop with his friends. In the 1967 election, he campaigned for his uncle Murasoli Maran at the age of 14. In 1973, he was elected to the General Committee of DMK.

Herose to prominence after being jailed under the Maintenance of Internal Security Act (MISA) for protesting against the Emergency imposed by former Prime Minister Indira Gandhi in 1976. His fellow DMK prisoner C. Chittibabu died of injuries and police torture while protecting him.

After writing his final year B.A. examinations from prison, he formed the DMK youth wing. In 1982, he became the Secretary of the wing and held the position for more than four decades.

In the 2011 Assembly Election, for the first time in his political career, he contested from Kolathur Assembly Constituency which is situated on the outskirts of Chennai city.

He served as the Mayor of Chennai in 1996 and improved Chennai’s infrastructure with projects such as Singara Chennai (Beautiful Chennai). By now, he was popularly known as Manager Thanthai (Father of the city). In 2001, he was re-elected as Mayor of Chennai.

In 2002, the then Chief Minister Tamil Nadu J. Jayalalithaa enacted Tamil Nadu Municipal Laws (Amendment) Act, preventing a person from holding two elected posts in the government, a move widely seen to remove Stalin as Chennai’s Mayor. However, the law was struck down by the Madras High Court. The court, however,  held that under Madras (now Chennai) City Municipal Corporation Act, 1919, a person cannot be mayor for two consecutive terms, though, unlike Stalin, earlier mayors were not directly elected. Stalin did not go to the Apex Court against the law. In 2003, he became the Deputy General Secretary of DMK.

In the 2006 Assembly Election, DMK won in the state and Stalin served as the Minister for Rural Development and Local Administration in the Government of Tamil Nadu. During his tenure, he helped self-help groups in the state. In 2008, he became the treasurer of DMK.

ON 29 May 2009, Tamil Nadu Governor Surjit Singh Barnala nominated M. K. Stalin as the Deputy CM of the state. On 3 January 2013, M. Karunanidhi named  Stalin as his heir apparent, thereby ending confusion about who would take over the party reins after his death.

In the 2016 Assembly Election, he won from the Kolathur constituency and was appointed as the Leader of Opposition. In 2018, his father M. Karunanidhi died.

In the 2021 Tamil Nadu Assembly Election, DMK won 159 of 234 seats. The majority mark in the state is 118 seats. M. K. Stalin became the 8th Chief Minister of the state preceded by Edappadi K. Palaniswami.