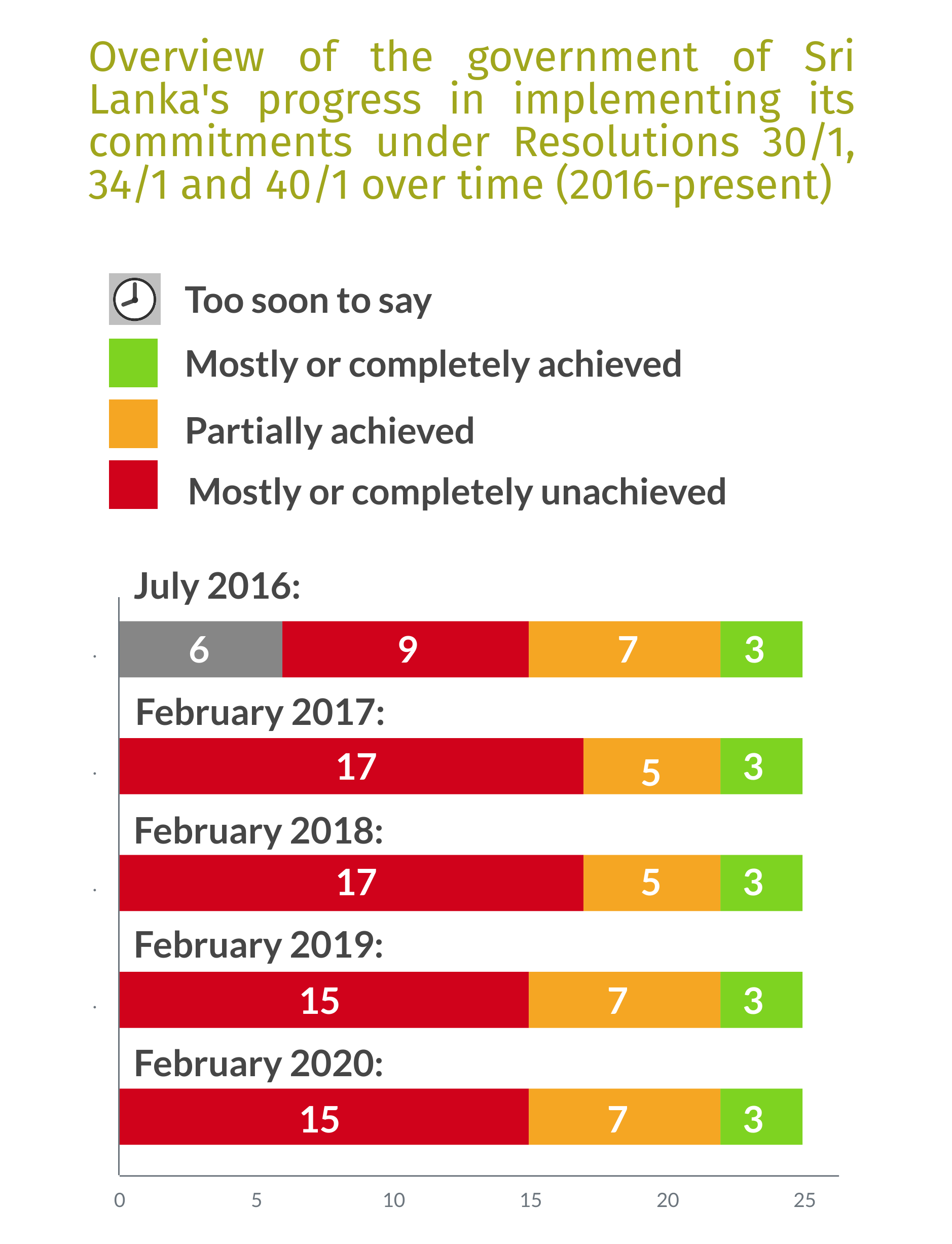 Following a landmark international investigation, in September 2015 the United Nations released a major report on serious human rights violations committed during the final stages of the civil war and the surrounding period (2002-2011). The document, known as the ‘OISL Report’[1] was clear in its view that many of those violations – perpetrated by both government of Sri Lanka and LTTE (‘Tamil Tiger’) forces – could amount to war crimes and crimes against humanity if established in a court of law. It made a number of recommendations as to how Sri Lanka might begin to address these violations in order to lay the foundations for a sense of sustainable peace.

In response, the national unity government that came to power in Sri Lanka in 2015, acting through the UN Human Rights Council, made a series of promises to deal with the legacy of the war; promises that included establishing mechanisms capable of investigating serious human rights violations and holding perpetrators to account. Those were contained in Human Rights Council (HRC) Resolution 30/1, which was co-sponsored by the government and unanimously adopted by HRC members in October 2015.

In response to limited implementation, the HRC has since adopted a further two resolutions: Resolution 34/1 (in March 2017) and Resolution 40/1 (in March 2019). The effect of these has been to ‘roll over’ the commitments contained in the original resolution and to extend the monitoring mandate of the UN High Commissioner for Human Rights. Under the terms of the most recent resolution, the High Commissioner is due to present a written update to the HRC at the 43rd session (in March 2020), as well as a comprehensive report at the 46th session (in March 2021). 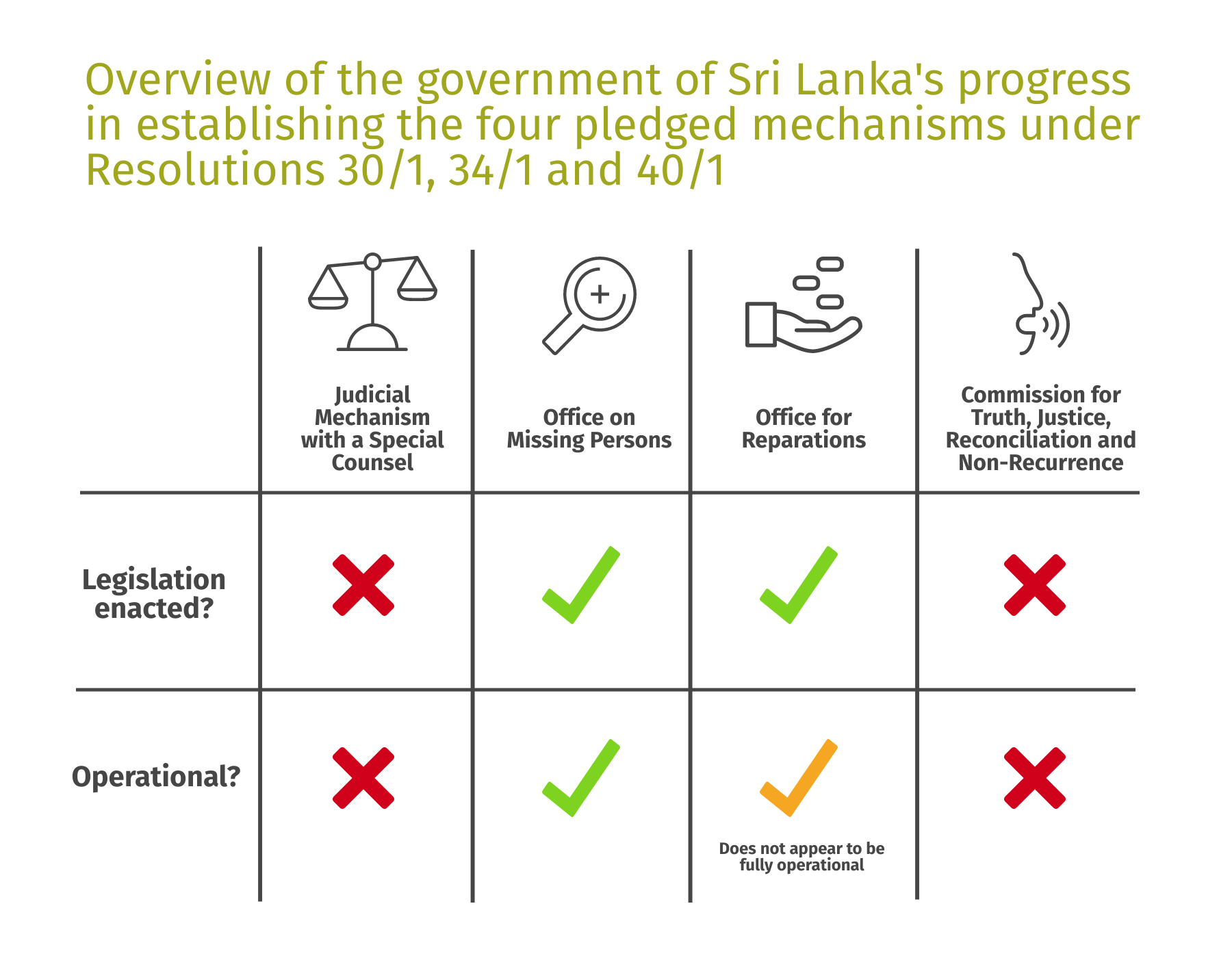 Has Sri Lanka’s government fulfilled those promises to date? We provide an answer to that question below, by distilling the contents of Resolution 30/1 into 25 key commitments and assessing the progress that has been made in relation to each. This evaluation – the latest of several by the Sri Lanka Campaign over the past four years – is based on various media reports, analyses by civil society groups, and the findings of UN human rights mechanisms and the UN High Commissioner for Human Rights.

Our findings paint a deeply troubling picture. Four and a half years since the adoption of Resolution 30/1, the overwhelming majority of the commitments made by the government of Sri Lanka remain either mostly or completely unachieved. Just one of the four key transitional justice mechanisms pledged has been fully operationalised. And, crucially, almost nothing has been done to tackle Sri Lanka’s deeply rooted culture of impunity, which lies at the heart of repeated cycles of mass violence in the country.

In November 2019, Gotabaya Rajapaksa (‘Gota’) – who in his former capacity as Defence Secretary played a leading role commanding government forces during the final stages of the civil war in 2009, a period in which tens of thousands of Tamil civilians were killed – was elected as Sri Lanka’s President. Shortly afterwards, Mahinda Rajapaksa, Gota’s brother and the former President (2005-2015), was appointed as Prime Minister. Both are credibly implicated in war crimes, crimes against humanity, and other serious human rights violations. 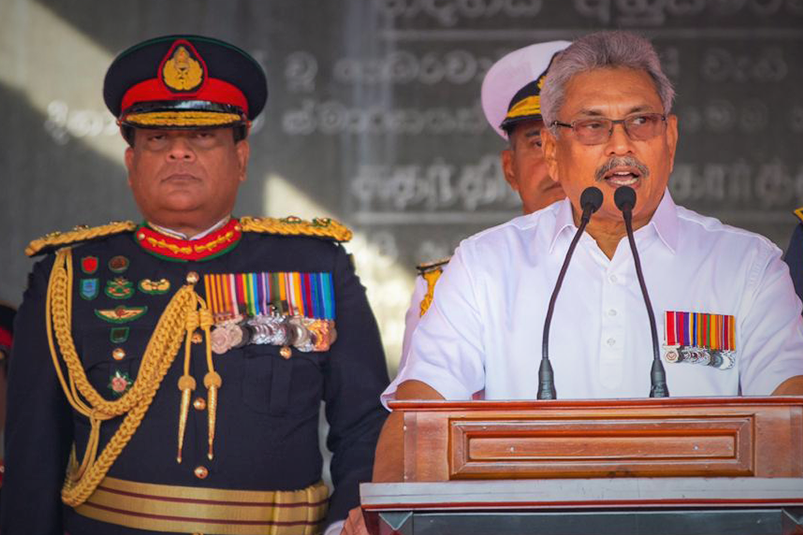 In February 2020, government officials announced that Sri Lanka would seek to “withdraw” from the HRC process and “seek a closure of the resolution.” The announcement is significant but not surprising. In recent months both of the leading figures within the new regime have voiced their staunch opposition to the HRC process. While on the campaign trail in October 2019, Gota stated that he did not recognise the agreement made by the previous government, arguing that the country needed to move on from “old allegations” and focus on economic development instead. As President, he has said that the resolution cannot be entertained in its current form on the basis that “it is not possible for the government to act against its own country.” In December 2019, Mahinda Rajapaksa described attempts to hold the military accountable for war crimes through the UN resolutions as a “humiliation” and an “injustice.”

At the time of writing, it was unclear whether the government’s latest announcement meant it would attempt to bring a new resolution to revoke the current one, or merely refuse to honour its commitments.

Meanwhile, an effort to reverse some of the limited progress made by the previous regime appears to be well underway.  The most concerning recent trends include a spike in intimidation and harassment against journalists and human rights defenders, a wave of attempts to interfere with investigations into serious human rights abuses, and the renewal of pledges by government officials to release convicted perpetrators. All of these trends, if left unchecked, are likely to increase the risk of further human rights violations and undermine Sri Lanka’s chances of building a sustainable peace.

Action through the Human Rights Council. What now?

The limited progress made towards the implementation of Resolution 30/1 nearly five years since its adoption, coupled with the shifting political landscape in Sri Lanka, will no doubt raise many questions among members of the international community about the value, scope, and nature of any future engagement on Sri Lanka at the UN Human Rights Council and beyond.

As the Sri Lanka Campaign has repeatedly emphasised, it is the views and wishes of victims and survivors which must fundamentally shape how those questions are answered.

In our previous update, we set out three key considerations for member states seeking to ascertain the current state of play and how to respond to it. They were:

Do victims and survivors feel reasonably satisfied with the steps that have been taken?

Do such steps address the root causes of the ethnic conflict in Sri Lanka?; and

Are the steps that have been taken of a kind which cannot be easily reversed in the future?

Unfortunately, the answer to each of these points remains a resounding ‘no’ – a view confirmed not only by the assessment below but also by the findings of our recent report

, ‘A Decade of Impunity’, in which we surveyed the views of ten Tamil victims and survivors from Sri Lanka’s Northern province.As that report highlights, those most affected by the war regard efforts to deal with the past in Sri Lanka as grossly inadequate. Despite tireless protests, demands for the most basic forms of redress – for acknowledgement, truth, and compensation for serious human rights violations – remain largely unmet. Meanwhile, there is deep-seated anger about the failure to bring perpetrators of the very worst abuses to account, coupled with increasing concern about the potential for ongoing impunity to lead to further human rights violations and wider conflict in the future. 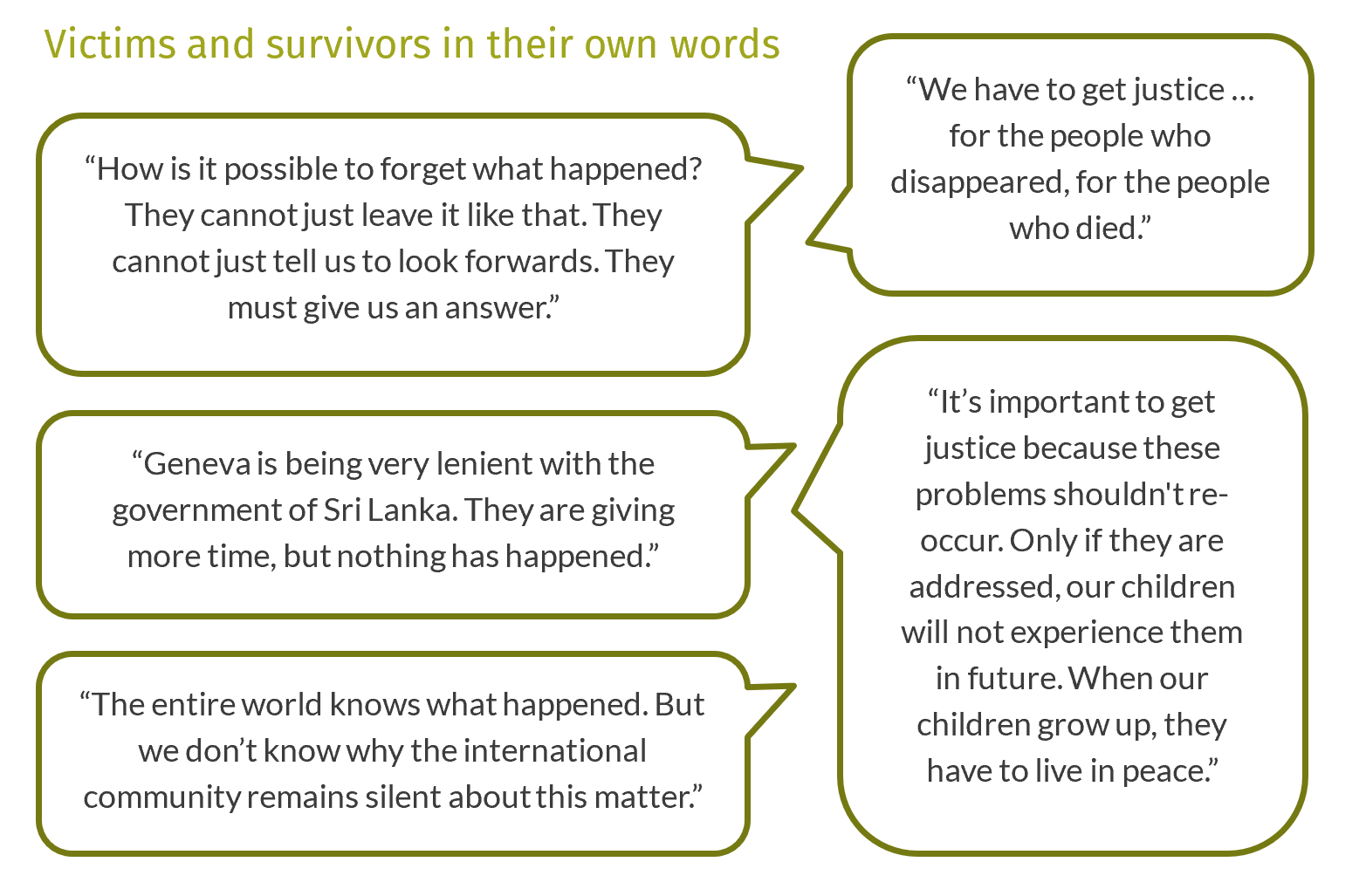 Testimony from Tamil victims and war survivors collected in 2019 (from A Decade of Impunity: Unlocking Accountability for the Victims of Sri Lanka’s Killing Fields).

For these reasons, it is essential that members of the international community remain committed to the original mandate of Resolution 30/1, and that they adopt a firm and principled stance on the need to address the legacy of the war. While that must entail continued active engagement at the HRC – both at the upcoming session and, as necessary, beyond the end of the current reporting period in March 2021 – the lack of domestic political will in Sri Lanka means that states should begin to go even further.

To that end, the Sri Lanka Campaign urges member states to:

Reaffirm their commitment to the agenda agreed to by the government of Sri Lanka under Resolution 30/1, and to signal clearly to the government the diplomatic consequences that would result should it seek to terminate its commitments.

Build support, particularly among states from the global South, for a continuation of the HRC process beyond the end of the current resolution’s expiration in March 2021 (including, if necessary, via a contested resolution at that time).

Enhance efforts to attain accountability for serious human rights violations in the face of limited domestic political will, including by:

Supporting efforts to obtain justice in the small handful of cases that are proceeding through the ordinary criminal justice system in Sri Lanka – and conversely, challenging attempts to obstruct or interfere with them.

Exploring options for international accountability, including the viability of a ‘IIIM-style’ mechanism to help consolidate and preserve evidence of serious human rights violations with a view to enabling criminal prosecutions before some later court or tribunal with jurisdiction.

Implementing the recommendation of the UN Human Rights Commissioner, “to prosecute Sri Lankans suspected of crimes against humanity, war crimes or other gross violations of human rights, in accordance with universal jurisdiction principles.”

Denounce the crackdown on civil society that has intensified since Sri Lanka’s Presidential elections in November 2019 and call on the government to immediately halt attempts to intimidate and harass activists, journalists, and victim groups, especially the families of the disappeared.

Immediately review all forms of bilateral engagement with Sri Lanka, including in the spheres of aid, trade, and security cooperation, to ensure that Sri Lankan officials accused of grave human rights violations are deprived of political and material support – and consider the use of targeted sanctions, travel bans, and asset freezes against the most problematic individuals.

1. Implement the recommendations of the OISL report

2. Engage with the Office of the UN High Commissioner for Human Rights and Special Mandate Holders

4. Establish a Commission for Truth, Justice, Reconciliation and Non-Recurrence

5. Establish an Office of Missing Persons

6. Establish an Office for Reparations

7. Mechanisms to have the freedom to obtain assistance from international partners

8. A process of accountability for abuses by all sides in the conflict

9. Uphold the rule of law and build confidence in the justice system

10. Establish a Judicial Mechanism with a Special Counsel and the participation of Commonwealth and other foreign judges, defence lawyers, and authorized prosecutors and investigators

15. End military involvement in civilian activities and the restoration of normality to civilian life

18. Review and repeal the Prevention of Terrorism Act

19. Sign and ratify the International Convention for the Protection of All Persons from Enforced Disappearances

21. Issue Certificates of Absence to the families of the disappeared

23. Preserve all existing records and documentation

25. Address all sexual and gender-based violence and torture
About editor 2673 Articles
Writer and Journalist living in Canada since 1987. Tamil activist.