Lee Kuan Yew,  the Father of Singapore and father of Prime Minister Lee Hsien Loong of Singapore has described Sri Lankan President Mahinda Rajapaksa as a Sinhalese Extremist and what happened in Sri Lanka in 2009 as ethnic cleansing. 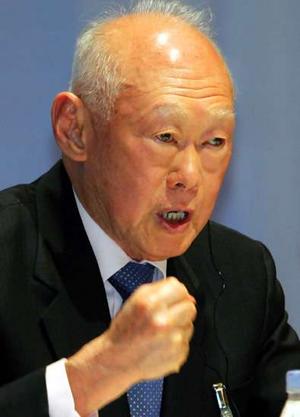 This statement of Lee is a matter of great import. All these years criticism from outside was dismissed by the Sri Lankan government as by colonialists. But this is by a respected Asian leader. After Singapore’s Senior Minister has spoken thus, will Singapore feel free to attend the Commonwealth Heads of Government Meeting (CHOGM) in November?

Surprisingly such comments of great import in a 2011 book are making it into the public domain only 2 years later.

Author Thomas Gordon Plate is an American journalist, internationally syndicated columnist and a Professor at Loyola Marymount University in Los Angeles, CA as its Distinguished Scholar of Asian and Pacific Studies.

Specifically Lee Kuan Yew has said of President Rajapaksa and Sri Lanka, “[Sri Lanka] is not a happy, united country. Yes, they have beaten the Tamil Tigers this time, but the Sinhalese who are less capable are putting down a minority of Jaffna Tamils who are more capable. They were squeezing them out. That’s why the Tamils rebelled. But I do not see them ethnic cleansing all two million-plus Jaffna Tamils. The Jaffna Tamils have been in Sri Lanka as long as the Sinhalese.”

Plate: “So what Asia saw was ethnic cleansing?”

Plate: “They [the Tigers] will come back, you think?”

Lee: “I don’t think they are going to be submissive or go away. The present President of Sri Lanka believes he has settled the problem; Tamil Tigers are killed and that is that.”

Plate: “See, that’s really a fascinating point, because to the extent that we have any sense of who you are at all, we think of you as this hard-boiled force­ first guy. But in fact, your system of government is much softer, consensual and intelligent, whereas what the Sinhalese in Sri Lanka are doing is a caricature of an LKY who never existed.”

Lee: “I’ve read his speeches and I knew he was a Sinhalese extremist. I cannot change his mind.” 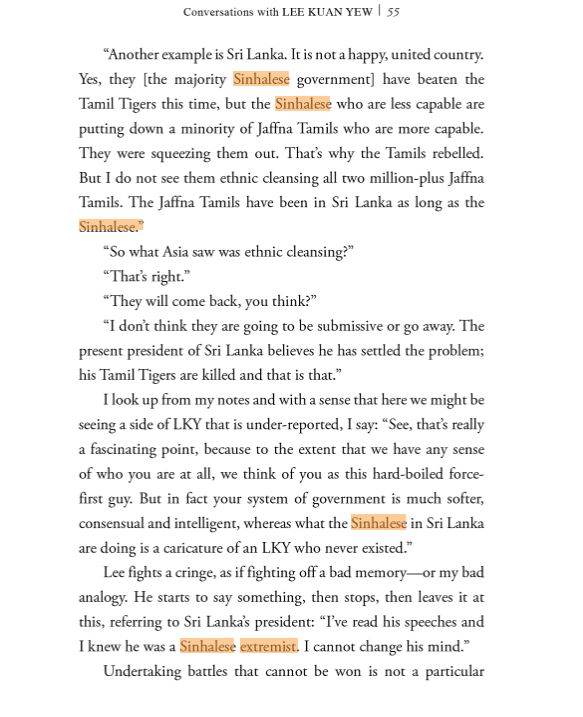