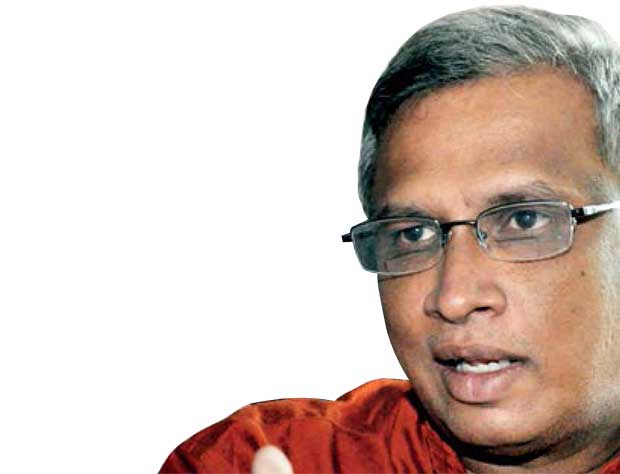 Following are excerpts of the speech made by TNA MP M.A. Sumanthiran at the Parliament debate on the Interim report of the Steering Committee of the Constitutional Assembly.

This is indeed the first time that a party representing the Tamil people of this country is agreeing with some proposals, although incomplete and still at the proposal stage.

I am saying this referring to the position paper that we have provided, which is part of the Interim Report that has been placed before this Assembly for Debate during these three days. We have stated our positions very clearly and I want to elaborate on some of them now.

We have very clearly stated that Sri Lanka shall be a secular State and I say this with responsibility: any Constitution that seeks to treat all of its citizens as its equals must be a secular Constitution. I am not a Buddhist and I can’t be told that I am second class in this country.

But, it is an indefensible position for the Buddhists to take. We, who are non-Buddhists, are saying, we don’t mind it (Buddhism) being given a foremost place. But, how will a Buddhist say, our religion must have the foremost place; others can have other places? How can any Buddhist who defends equality ever stand up and say that? But yet, if you want it, we have said, we are willing to grant it.

I am saying all of this to show that the call for federalism came from Mr. S.W.R.D. Bandaranaike, Mr. Pieter Keuneman, Mr. A. Vaidialingam and more importantly, from the Kandyan Chiefs in the 1930s

We have very clearly said that Sri Lanka must be a federation – a Federal State. I want to say a few things about this idea of a Federal State. There is a wrong conception or a wrong view that has been spread in this country that the call for federalism comes from the Tamil people because they want to be separated from this country. Nothing can be furthest from the truth. The federal idea was introduced to this country by the founder of the Sri Lanka Freedom Party, S.W.R.D. Bandaranaike in 1926. There were six letters that he wrote to “The Ceylon Morning Leader” on federalism.

Not only that, the Left of this country in 1944 held the same view. Even before that, the Communist Party made a resolution that the country must be federal. The Pieter Keuneman – A. Vaidialingam Report of the Communist Party of 1944 very clearly articulates that Ceylon must be a federal country.

I am saying all of this to show that the call for federalism came from Mr. S.W.R.D. Bandaranaike, Mr. Pieter Keuneman, Mr. A. Vaidialingam and more importantly, from the Kandyan Chiefs in the 1930s before the Donoughmore Commission and later in the 1940s, before the Soulbury Commission. They articulated three units with the North and East as one.

So, those who oppose federalism and those who oppose the North and East Province as one unit must remember that that proposal came from the Kandyans first, not once, but twice before two imperial commissions. So, you all must disabuse your minds of the view that this is somehow a Tamil project, a first step to separation. We have very clearly stated that the country must remain one.

We have said that very clearly. We are participating in this process in the most responsible way possible and we ourselves have said that the country must remain one. Our view is that if the country is to remain one, different people in this country must have a share of the governance of this country. It can’t be a system of Government in which a simple majoritarian rule prevails.

This country consists of different people and it is in order to remain as one that we are seeking maximum possible devolution of power; maximum possible power-sharing arrangement, so that all the people in this country have a share in that. Otherwise, sovereignty, which is said to rest in the people, will become meaningless; sovereignty will be exercised only by one majority, one people of this country, if it is a simple majoritarian rule.

That must change. The reason why the Tamil National Alliance participates in this level in this Constitution-making process is to change that, to erase that bitter past so that we can, together with you, say our language is equal – that was corrected in 1987, but must be implemented in full – our religions are equal, no foremost place to anybody, everybody is foremost in this country; we must be able to say we have due share in the governance structures of this country.

Now, these are proposals, none of them that are being placed here have gone beyond anything that the seven Chief Ministers and their Opposition Leaders other than the North East Provincial Council made before the Steering Committee. All of the Chief Ministers in the seven other provinces, other than the North East, want to share power. They came before the Steering Committee. They want law and order, they want land powers, they want the powers of the Governor reduced.

Prof. GL Peiris’ petition to the Supreme Court- on which the Determination on the Twentieth Amendment was made- was made on the basis that a postponement of the provincial council election affects the sovereignty of the people and they don’t want it postponed. So, the creation of provincial councils hasn’t resulted in the country being divided.

I also have with me the 2000 August Draft Constitution Bill that was presented to this House by the People’s Alliance Government of that day of which the Hon. Mahinda Rajapaksa was a Cabinet Minister; a Bill which was certified by the Cabinet of Ministers as a Bill that is intended to be passed by this Parliament by a two-thirds majority and approved by the people at a referendum. He was a Cabinet Minister who approved of this Bill and what does that Bill say? These proposals before us today say, we are one country. Therefore, we can call ourselves, “ekeyaraja”, the meaning of which will say,

“ஒரு நாடு” or “ஒருமித்த நாடு” – “one country.” This doesn’t even say that. This says, “Sri Lanka is a Union of Regions”. All the Cabinet Ministers at that time supported this, in this House. The UNP supported that principle. The UNP burned a copy of this Bill in this House because there was a transitional provision with regard to the Executive Presidency, not because of power-sharing, not because of change of status of the country.

When you were in power you approved of a Draft Bill that went far beyond, far beyond what is contemplated by this Interim Report. Is it not to mislead the people of this country, and prevent a final resolution to the national question that has plagued this country ever since Independence? Don’t we want a reasonable resolution regarding this? If you ask the question what is the biggest problem this country has faced, obviously it is the national question. This country hasn’t faced a war for three decades on account of anything else, not on account of any other issue, it is only with regard to these issues that actually parts of the country were ruled by others, also for certain durations.

So, we are now in a process. As responsible representatives of our people, we are Tamil Members of Parliament from the North and East – except two, all others belong to the Tamil National Alliance – we have an overwhelming mandate from our people to resolve this question within a united, undivided country and we have gone one step further and said, an indivisible country even in the future. So, when we are participating like that, our people have misgivings of this Interim Report.