The Local Government elections have sent tremors through the body politic of Sri Lanka, and the fall out of the shaken Coalition Government is yet to unfold. With the muscular re-emergence of Rajapaksa populism, nationalist political strategies are again gaining centre stage. Even as economic failures of the ruling Government gain attention, the golden opportunity in 2015 for a constitutional political solution have for all purposes been shut down.

The elections in the Northern Province, on the other hand, point to possible changes in Tamil politics in the years ahead. This article focuses on the worrying new face of Tamil nationalism as well as some progressive signs in northern Tamil politics. 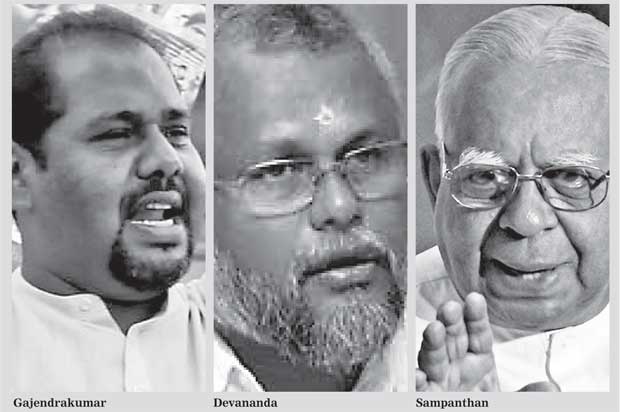 The election campaigns in the North this year were comparatively subdued compared to the Provincial Council elections in 2013 and the two national elections in 2015. The ward system and women’s quota encouraged many more people to contest. However, many of the contestants in this election were making calculations about their likelihood chances of getting elected with a certain party as opposed to party ideology and programmes. But without political mobilisation – notably the lack of women’s political parties – the diversity of issues and candidates did not come to the fore, except in the case of the few parties championing anti-caste politics.
While there was a considerable door to door campaigning unlike in the other post-war elections in the North, the larger election campaign meetings did not gain the expected enthusiasm and crowds.

The media campaigns of the contesting parties were focused on mud-slinging and attempting to delegitimize the party considered to be its main threat or rival.    The Interim Report for Constitutional Reform, aspects of a political solution and corruption were the main topics of debate in the election campaign, rather than local economic and administrative issues that come under the purview of Local Governments.
The heated political rhetoric of the campaigns in Jaffna became a contest for Tamil nationalist legitimacy, between the “house” the historical symbol of the Federal Party, now the TNA led by Sampanthan, and the “bicycle” the historical symbol of the Tamil Congress, now the TNPF led by Ponnambalam. The TNPF campaign, in particular, drew on the legacy of the LTTE and its politics, claiming to be its rightful heirs.

“Just as the LTTE’s suicidal politics helped elect Rajapaksa in 2005 by forcing a boycott of the Presidential elections in the North, the current brand of narrow Tamil nationalists is pleased about the recent gains of Rajapaksa in the South.  “

In the predominantly Tamil districts of Kilinochchi and Mullaithivu, the TNA got 47% and 42% respectively. Both the TNPF and EPDP in those districts received only 5% of the votes. However, Chandrakumar who had broken away from the EPDP a year ago, made an impressive showing leading independent groups, which as a whole got 30% of the votes in Killinochi.

The results in Mannar, with a multi-religious politics of Christians, Muslims and Hindus, and in Vavuniya with the Sinhala constituencies, was more complicated. In those districts, the TNA got 28% and 26% respectively. The national parties, including the UNP, SLFP and SLPP, made considerable gains in these districts with close to 50% of vote share. These national parties also polled about 10%, 15% and 30% of the votes in Kilinochchi, Jaffna and Mullaitivu respectively.

The outcome of the elections is such that in most Local Governments in the North, no party has an absolute majority and they are forced to form coalitions. I draw the following points from election outcomes in the North.
The TNA is in decline; both in terms of its vote share and in terms of the enthusiasm for its election campaigns. It continues to be led by an older generation of Federal Party loyalists who lack vigour. The TNA’s confidence that the Tamils in the North will always vote for them by default has been shaken.

The TNPF have recruited some active young cadres who have been mobilised with a virulent Tamil nationalist politics. They continue to rely on their urbanised professional base and support from extreme sections of the Tamil diaspora; they managed to beat the TNA in the Pointpedro and Chavakacheri Urban Councils. They are setting the agenda for extreme nationalist politics including with the discourse of genocide and Tamil victimhood, even though they do not have a base in the Vanni where the people met with the tragic fate at the end of the war. If the TNPF is able to reach the rural constituencies that have thus far rejected them that would lead to a dangerous shift in Tamil politics.

The EPDP has remained a significant actor in Tamil politics. It has broken the myth that it is dependent on state patronage for its electoral politics. It has a steady oppressed caste base in different parts of Jaffna and has won significantly in the islands off Jaffna.   A number of independent groups have done well for various reasons including anti-caste politics. In Karainagar an independent group working for the social development of oppressed caste communities formed a year ago, have won three seats equivalent to the TNA. In Puttur, where a powerful anti-caste struggle around cemeteries took place last year, leftists backed by the New Democratic Marxist Leninist Party have won four seats. In Chavakacheri, the newly formed Social Democratic Party of Tamils, which came out of the EPRLF, has managed to secure 2 seats. And in Kilinochchi, progressive independent groups led by Chandrakumar, have proven a major challenge to the TNA and won nineteen seats. Chadrakumar’s support base includes the long marginalised Up-Country Tamil population that had been displaced to the Vanni over the decades.

“In this environment, how did the Tamil vote pan out in Jaffna and Northern Province more generally? The Jaffna District”

If these local elections are any sign of the future of Tamil politics at the regional level, then there are clear dangers of a downward spiral of polarising Tamil nationalist politics led by the TNPF. On the other hand, the pockets of progressive politics which have eschewed narrow Tamil nationalism are a glimmer of hope to re-chart Tamil politics.
As the economic frustrations in the North mount, the status quo, led by the TNA, may crumble. But the alternative could just as well be the consolidation of the right-wing elite nationalism of the TNPF, which has no qualms about opportunistically peddling the LTTE’s imagery and politics. On the other hand, anti-caste politics silenced during the war is now emerging as the politics for various smaller parties, as the excluded and marginalised people seek a political voice. Beyond elections, these progressive political movements can become an effective check on any aggressive street politics of the extreme Tamil nationalists; who in recent times with the support of Chief Minister Wigneswaran are also introducing a dangerous Hindu element to their Tamil nationalism.

Just as the LTTE’s suicidal politics helped elect Rajapaksa in 2005 by forcing a boycott of the Presidential elections in the North, the current brand of narrow Tamil nationalists is pleased about the recent gains of Rajapaksa in the South. They see the rise of their Sinhala Buddhist nationalist twin as the route for international legitimacy for Tamil nationalism, regardless of the dangers it poses to the larger Tamil population.

The urgent need today is for solidarity among the various ethnic communities to arrest the march of nationalism and to build a broad movement for democracy and social justice.   I will end with an anecdote. When I asked a woman from a rural oppressed-caste constituency about whom she had voted for, she first said for the “house”, or the TNA. On pressed why, she said, she actually voted for the “veena” the symbol of the EPDP. Then she went on to say: “they helped us get electricity, they built our road, they are the reason we are getting housing… we tell people we vote for the house because that is what Tamils are expected to do, but we actually vote for those who help us.”