Shedding the war mentality: Are we capable of it? 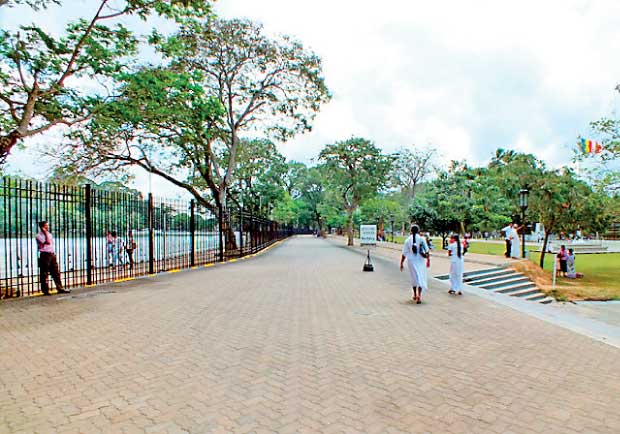 There is a Fundamental Rights Application before the Supreme Court on whether the road in front of the Temple of the Tooth Relic should be opened. Pardon me, but would not the question have been more conveniently answered if posed in the Negative, i.e. why should it not be opened? It being a public road has not been supposedly built, like all other roads, for the purpose of public transport, both pedestrian and vehicular?

The Road was restricted to public transport after the attack launched by the Tamil Tigers in 1998; given the circumstances, no one in their proper senses objected. Now the war has been over for almost a decade and barricades conjuring up images of cold war Eastern European Police States have disappeared. Well, all but this one.

Now again the question of proper senses; why not open it? The position taken by the Respondents in the case including the Chief Prelates of the Chapters would make interesting reading in deed.

Shift the focus now to the North. Thousands of acres taken over by the Army remain occupied by men in uniform. Any rational justification escapes the mind. Yet the majority of nationalists and their political spokesmen seem hell bent on not letting go of these lands; not to any body else but to the rightful owner! The impression created is as if the civilians who owned the lands for centuries are the encroachers and not the military. Should the Northerners never be left alone to run their civil life other than without the prying eye of state military ? So much for all the lofty talk of normalcy returning to civilian life.

The obsession with an unrelenting war mentality seems an addiction that refuses to go away, with the attendant suspicious and sceptical attitude towards the Tamil community. The ill-founded rhetoric of Army Commanders of never allowing future rebellions adds momentum to this martial law mentality. As if, rebellions, both in the North and South, waited for aegis of the army to take up arms. As if insurgents send notices by Registered Post to Army Headquarters before they rise up in arms

A third scenario relates to the move by the Government to shelve the Prevention of Terrorism Act and replace it with an alternative statute. Shrieks of protest emanates, yet again, from the very quarters that want the Dalada Maligawa cordoned off and the unnatural and excessive concentration of Military Presence in the North perpetuated. Not to them the dire consequences of suspending ordinary criminal justice procedures with draconian martial law regulations, making short work of constitutionally guaranteed fundamental rights. 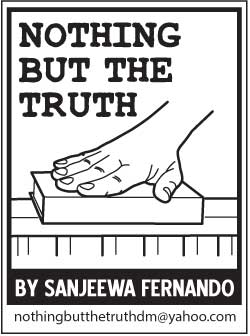 You only need to run through Fundamental Rights applications filed by alleged suspects under the PTA and the reality dawns as clear as daylight. Yet the persistence with strict regulations as does the PTA.

The three scenarios reflect a mentality which refuses to acknowledge that the war is over; that minorities too have a right as much as the others to lead a normal, decent life enjoying constitutional rights that could be checked only by restrictions laid down under the law and not under emergency regulations.

It betrays a chauvinistic attitude accentuated by a narrow-mindedness simply not compatible with the reality of a multi-ethnic and a multi-religious population.

A haughty religious attitude placing one religion above the others and the hierarchy venerated from inside an ivory tower. Not to say anything about the privileges such placements ensure.

Threats by the Defence Minister that Northerners celebrating Mahaveer day were to be arrested, though not representing the government’s stance, reflects an eagerness to placate the majority mentality seemingly haunted by war.

If Prabha and the Tigers were outlaws taking up arms to establish a separate state, so was Wijeweera and the JVP, warring against the legally elected regimes, not once but twice. Yet il maha viru samaruwa does not entail any such threats and is celebrated
without much ado.

One of the keys to allowing a society plagued by war and paralyzed by emergency laws to heal, is to remove those icons of war from the public psyche. Barricades, army camps, closed-down roads and police-state regulations not only hinder this, but also harks back to those selective memories and forgetting of wartime. The seeds of antagonism, specially on the side of the vanquished, could only be removed by integrating them to the mainstream society as citizens of the Republic, not by wagging the cane of submission, as we have been used to during the thirty-year war period.

In a country where the subject of Urban Development was placed under the Ministry of Defence this state of affairs might sound hardly surprising. Yet the disturbing aspect consist of the fact that a war mentality extends beyond a simple apprehension of allowing normalcy to reign in the country; it coalesces in the national political stage as an aggressive and powerful force, demanding further militarization, emergency law status and hegemonic attitude to power sharing. It feeds on the euphoria of the war victory, which per se is not objectionable; yet a wish to remain in a warring and a beleaguered mentality that is psycho-politically exclusive and discriminatory, is; very much so.

Recent incidents at Gintota as well as the tense situation that arose at the Jaffna University highlight a very strenuous relationship between the majority and minorities. In all likeliness, if allowed to continue unchecked; the process could erupt in communal violence, spelling further disaster for the whole nation. Hints that former defence secretary who was associated mainly with the defeat of the LTTE and hence, exalted as a war hero, would be a national level candidate for future premiership or even presidential status seem to embolden those, who wish to perpetuate a war mentality and give concrete form to their chauvinistic aspirations. Scoundrels who usurped the patriotic banner and used it for their personal gain, seek another scapegoat to justify calls for hegemonic politics aimed at intimidating minority races and religions.

Rise of the ultra-right

There is a tendency world over of racial and religious extreme fringe groups hijacking secular or moderate governance by high handed tactics such as blockades, protests and intimidation as was seen in Indonesia and Pakistan. In Germany the ultra-right has shown remarkable electoral success over moderate parties. The most disturbing aspect of such phenomena being those bigotries permeating the whole society including the governing quarters, thus affording apparent legitimacy to extremism and bigotry.

We saw how the Minister of Justice who incidentally was the Buddha Sasana Minister as well, responded to a claim by a rights-activist lawyer who came up with facts related to christian places of worship that have come under attack during recent times. Although no one has contested the figures given by him over national TV, the Minister of Justice, out of all others, was audacious enough to threaten him with disbarring; a move that signalled his allegiance to be with the fringe and not the centre.

We live in tricky and explosive times when it comes to racial and religious issues. We have wasted enough time in extending the warm hand of reconciliation to an estranged and vanquished Tamil community

We live in tricky and explosive times when it comes to racial and religious issues. We have wasted enough time in extending the warm hand of reconciliation to an estranged and vanquished Tamil community. As things stand today the window of opportunity is rapidly closing.

Yet again, it all boils down to the political will of the government in power, whether they persist with what is right by the nation in the long run or as many a regime in the past, play election games with the fate of our future generations sealed with disaster.