SL should take concrete steps towards reform objectives: US 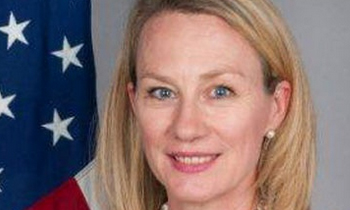 The Government should take concrete steps towards its Constitutional, Legislative and Security sector reform objectives, US Acting Assistant Secretary of State Alice Wells said on Thursday.

In her speech ‘Maintaining US Influence in South Asia: Fiscal Year 2018 Budget’, before the House Foreign Affairs Committee, Ms. Wells said the coalition Government’s commitment to a reform agenda had prompted growing interest in expanding engagement with the US, including military-to-military relations.

“All along, however, we have recognised the need for Sri Lanka to take concrete steps toward its reform objectives. In accordance with limits set by the Congress, our modest military-to-military engagement has therefore expanded slowly and incrementally,” she said.

She said the two countries were working together to fulfill the steps to which the two nations agreed in the UNHRC resolution on Sri Lanka.

“These resolutions committed the Sri Lankan government to transitional justice and prevention of the recurrence of the violence and abuses experienced during the nation’s 26-year conflict through constitutional, legislative, and security sector reforms.

Specific steps include constitutional reform devolving more administrative power from the central government to Sri Lanka’s regions, the replacement of the PTA with a law that meets international standards of fairness and due process, the return of land seized by the military during the war, and the establishment of transitional justice mechanisms such as the Office of Missing Persons (OMP), a truth and reconciliation commission, an office for reparations and a credible mechanism to investigate and prosecute alleged war crimes. The United Nations will continue its oversight of the implementation of these steps through March 2019,” Ms.Wells said.

She said the US FY2018 budget request of $3.4 million in foreign assistance focuses on strong support for security cooperation and enhanced strategic trade controls, while contributing to Sri Lanka’s progress toward becoming a mine-impact-free nation by 2020.

“Additionally, the Millennium Challenge Corporation (MCC) is developing a compact with Sri Lanka after it successfully passed the MCC policy scorecard in 2016. In June, MCC approved an initial $7.4 million to study potential projects and conduct due diligence work in the transport and land sectors. MCC is working closely with the Government of Sri Lanka to bring a compact for Board approval in 2018,” Ms. Wells concluded.