Sri Lanka is in an economic crisis. Here’s what it’s like for people on the ground

Colombo, Sri Lanka (CNN)For three straight nights last week, Upul took to the streets of Sri Lanka’s capital city holding a candle or a placard as he protested the country’s worst economic crisis in decades. Like his neighbours, he was frustrated by the more than 10-hour power cuts that plunged Colombo into darkness, and a shortage of gas to cook with that made it hard for his family to eat. Then on Thursday — the fourth night — the protest turned violent. Furious demonstrators hurled bricks and started fires outside Sri Lankan President Gotabaya Rajapaksa’s private residence, as police used tear gas and water cannons to break up the protests.” People were visibly angry, shouting,” said Upul, who asked only to be referred to by his last name for fear of repercussions. “Earlier (in the week) they demanded the President step down, (on Thursday) they were yelling and calling him names.” 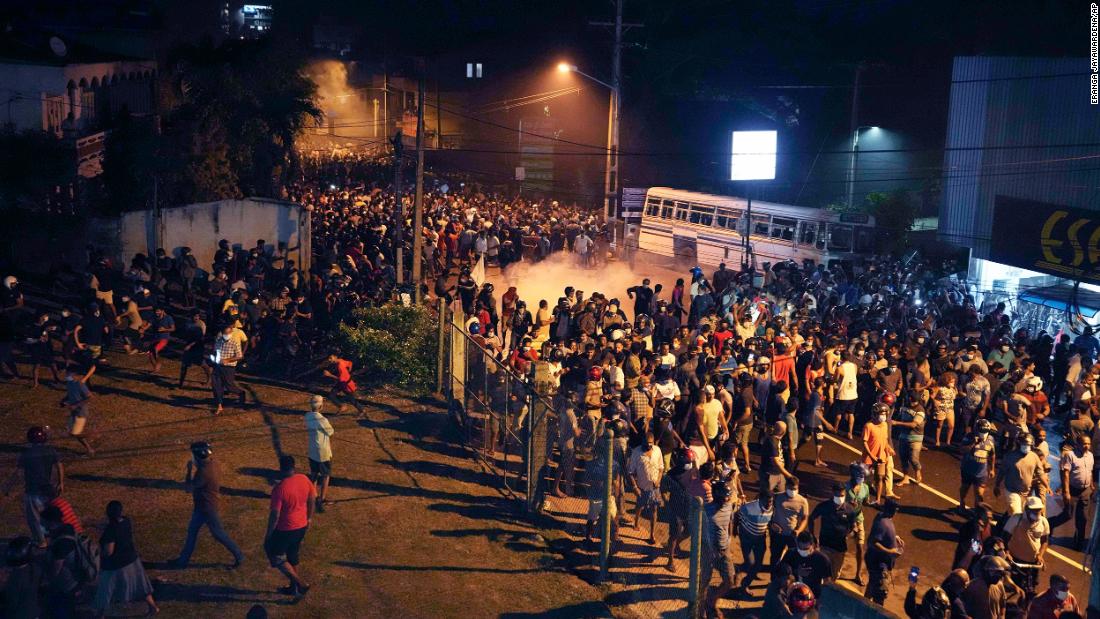 Protesters take cover as police use tear gas to disperse them during a protest outside the Sri Lankan President’s home on March 31, 2022. For weeks, Sri Lanka has been battling its worst economic crisis since the island nation gained independence in 1948, leaving food, fuel, gas and medicine in short supply, and sending the cost of basic goods skyrocketing. Enter your email to sign up for CNN’s “Meanwhile in China” Newsletter. close dialog

What’s happening in China and what does it mean for the rest of the world? Shops have been forced to close because they can’t run fridges, air conditioners or fans, and soldiers are stationed at gas stations to calm customers, who line up for hours in the searing heat to fill their tanks. Some people have even died waiting. But Thursday night marked an escalation in Sri Lanka’s ongoing economic crisis. Following the protests, the police imposed a curfew and the President ordered a nationwide public emergency, giving authorities power to detain people without a warrant. On Saturday evening, Sri Lanka declared a nationwide 36-hour curfew, effectively barring protests planned on Sunday — but protests went ahead Saturday anyway. In a statement Sunday, police said they had arrested 664 people for violating the curfew. Meanwhile, the government is seeking financial support from the International Monetary Fund (IMF) and turning to regional powers that may be able to help. But there is brewing fury inside Sri Lanka — and experts warn the situation is likely to get worse before it gets better. 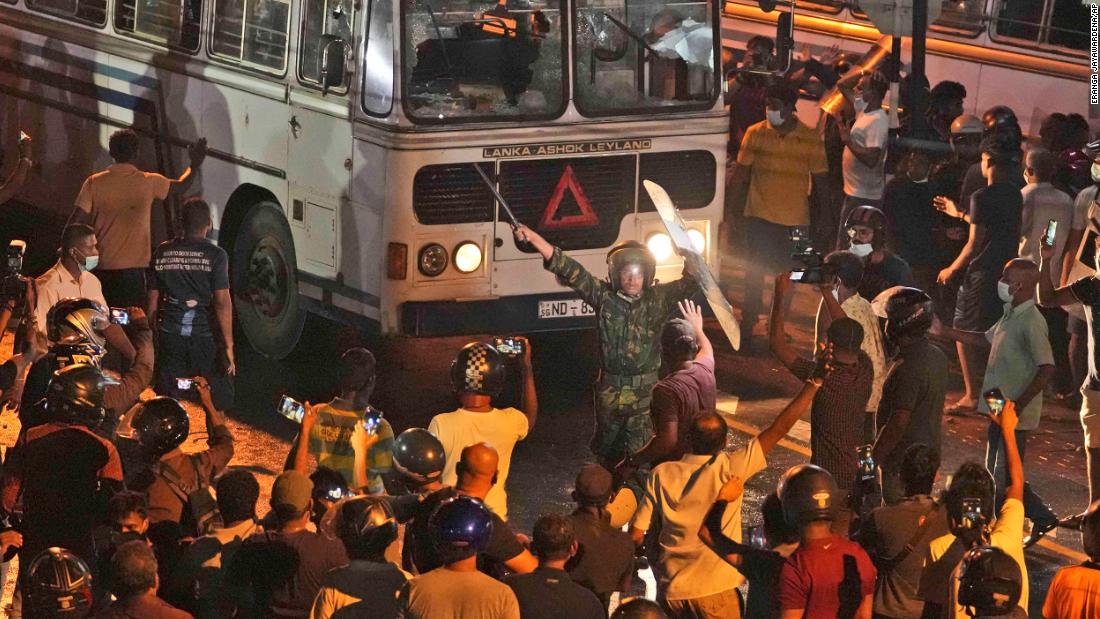 A Sri Lankan policeman tries to disperse protesters in Colombo, on March 31, 2022.

For weeks, life in Sri Lanka has involved hours of queuing — just to get basic goods needed to survive.

Our daily life has been reduced to standing in a queue.

“Our daily life has been reduced to standing in a queue,” said Malkanthi Silva, 53, as she leaned on a worn blue gas cylinder in Colombo’s baking heat, where she had already been waiting for hours for the propane she needs to cook to feed her family. “When we need milk powder, there’s a queue for that, if we need medication there’s another queue for that.”Though the situation is now particularly acute, it’s been years in the making.”30% is misfortune. 70% is mismanagement,” said Murtaza Jafferjee, chair of Colombo-based think tank Advocate Institute. For the past decade, he said, the Sri Lankan government had borrowed vast sums of money from foreign lenders and expanded public services. As the government’s borrowings grew, the economy took hits from major monsoons that hurt agricultural output in 2016 and 2017, followed by a constitutional crisis in 2018, and the deadly Easter bombings in 2019. 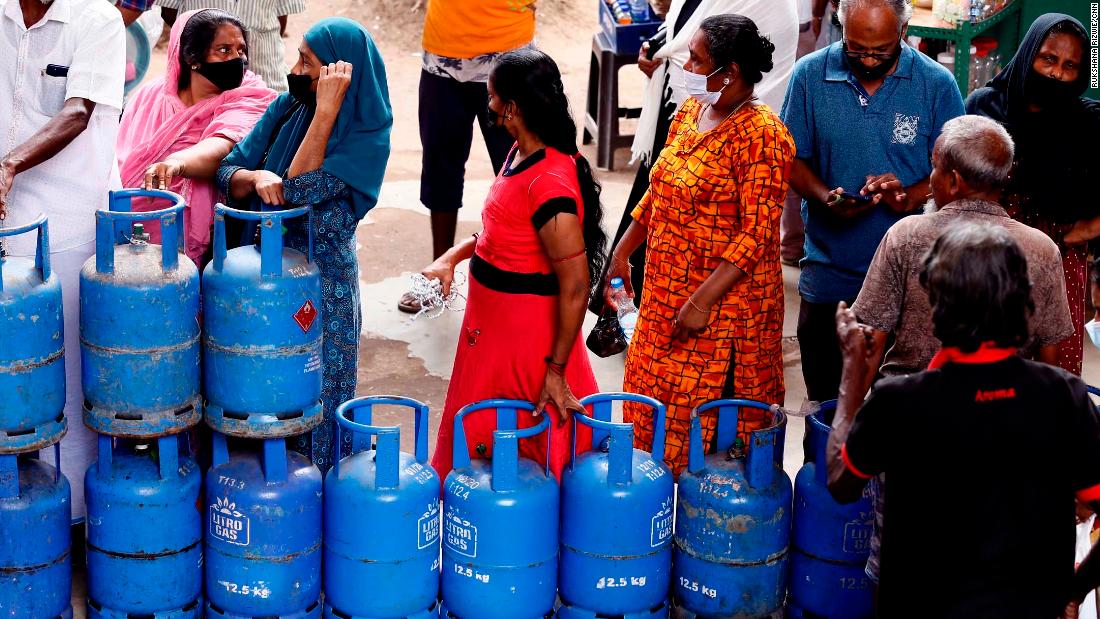 Sri Lankans spend most of their day queueing for fuel and gas as the country’s economic crisis worsens. In 2019, the newly elected President Rajapaksa slashed taxes in an attempt to stimulate the economy.”They misdiagnosed the problem and felt that they had to give a fiscal stimulus through tax cuts,” Jafferjee said. But while President Rajapaksa was new to the role, he wasn’t new to the government. As defence minister under the leadership of his elder brother, Rajapaksa oversaw a 2009 military operation that ended a 26-year civil war with the Liberation Tigers of Tamil Eelam (LTTE). The United Nations opened an investigation last year into allegations of war crimes committed by both sides. After winning the presidential election, Rajapaksa appointed his brother, former President Mahinda Rajapaksa, as Prime Minister and filled dozens of government roles with serving or former military and intelligence personnel, according to the UN. Their younger brother, Basil Rajapaksa, was later appointed finance minister.In 2020, the pandemic hit, bringing Sri Lanka’s tourist-dependent economy shuddering to a halt as the country shut its borders and imposed lockdowns and curfews. The government was left with a large deficit. 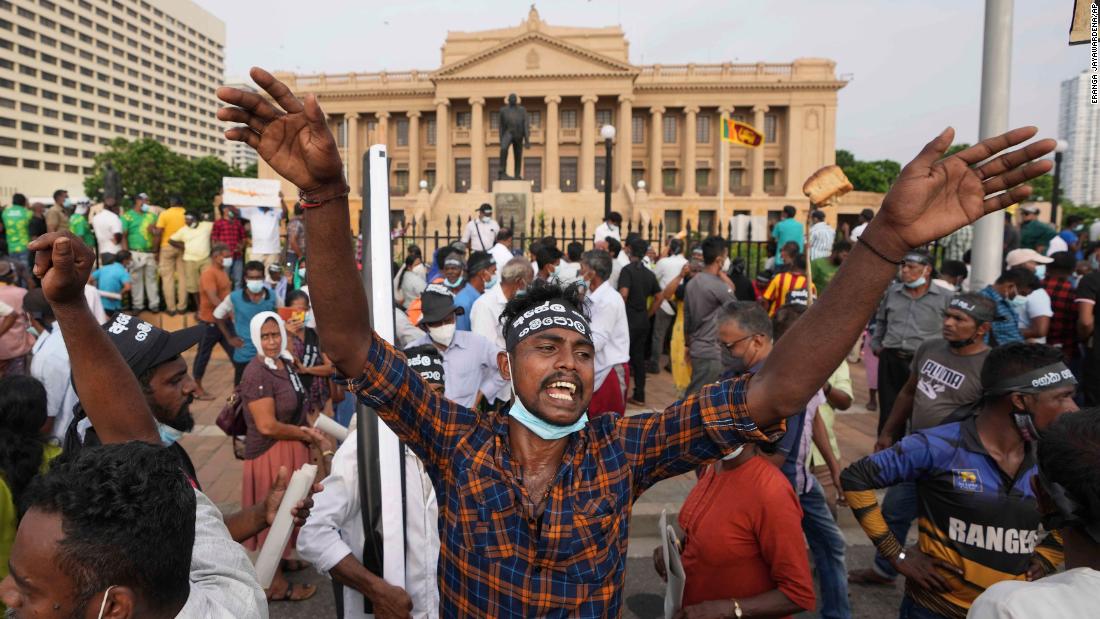 Opposition party supporters shout slogans during a protest outside the President’s office in Colombo, Tuesday, March 15, 2022. Shanta Devarajan, an international development professor at Georgetown University and former World Bank chief economist, says the tax cuts and economic malaise hit government revenue, prompting rating agencies to downgrade Sri Lanka’s credit rating to near default levels — meaning the country lost access to overseas markets. Sri Lanka fell back on its foreign exchange reserves to pay off government debt, shrinking its reserves from $6.9 billion in 2018 to $2.2 billion this year, according to an IMF briefing.

The cash crunch impacted imports of fuel and other essentials, and in February Sri Lanka imposed rolling power cuts to deal with the fuel crisis that had sent prices soaring, even before the global crunch that ensued as Russia launched an unprovoked invasion of Ukraine. Last month, the government floated the Sri Lankan rupee, effectively devaluing it by causing the currency to plunge against the US dollar. Jafferjee described the government’s moves as a “series of blunder after blunder.”Prime Minister Mahinda Rajapaksa told CNN Saturday that the Finance Minister and his team were working around the clock to put the economy right. He said it was wrong to say the government mismanaged the economy — instead, Covid-19 was one of the causes. Previously, the President said he is attempting to resolve it.”This crisis was not created by me,” Rajapaksa said during an address to the nation last month. 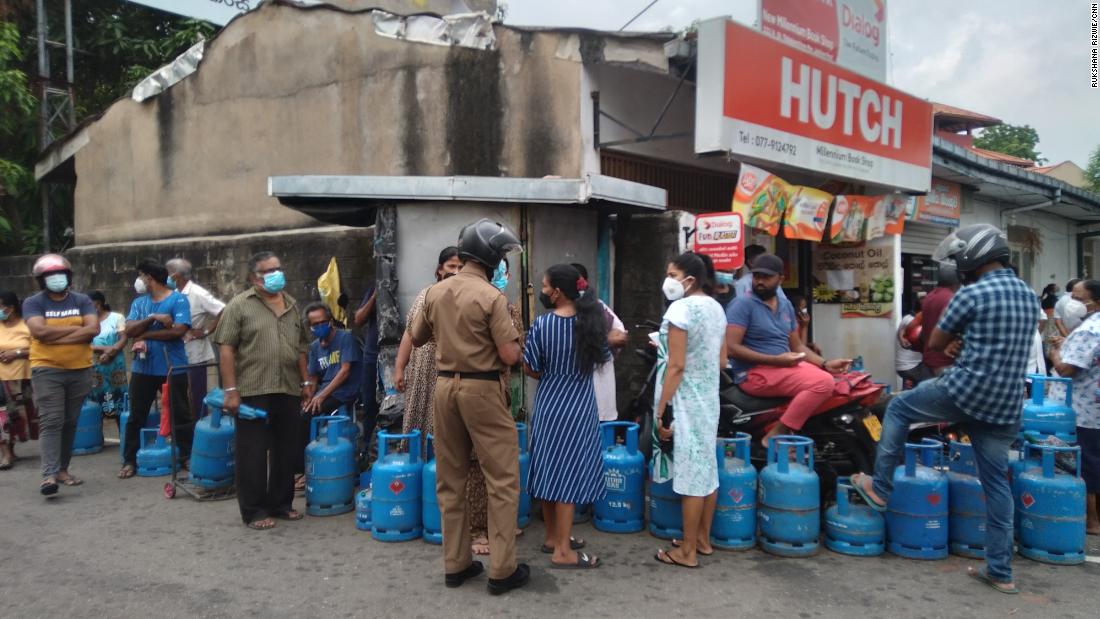 The unfolding situation in Sri Lanka has made it incredibly challenging to earn money — and even getting to work can be a major obstacle for some. Auto-rickshaw driver Thushara Sampath, 35, needs fuel to work so he can feed his family. But both fuel and food are being rationed, and prices are soaring — the cost of bread has more than doubled from 60 rupees ($0.20) to 125 rupees ($0.42), he said. Ajith Perera, a 44-year-old auto-rickshaw driver, also told CNN he can’t survive on fuel rations.” With the litre or two we receive, we cannot run hires and earn a living,” said Perera, with tears in his eyes. “Leave alone looking after my mother, wife and two children, I cannot pay the instalment for my taxi to the finance company,” he said. For many, it’s an impossible situation — they can’t afford to work, but they also can’t afford not to join long lines for basic goods. Kanthi Latha, 47, who sweeps roads for a living to feed her two young sons, says she quietly slips away from work to join shorter lines for food before hurrying back.” I cannot afford to take the day off if I do I may lose my job,” said Latha. Before the economic crisis, Sivakala Rajeeswari says her husband worked as a construction worker. But with the price of building materials spiking, people are reluctant to undertake even the most basic construction work, she said.

We’ve never been this poor even with all the money we saved and earned.

Upul Rajeeswari, 40, says she can still earn a living doing chores at people’s homes, but for the past few days she’s had no time to do anything but wait in line. “I have not had the chance to go and work anywhere,” she said. “When will this misery end?”Even members of the middle class with savings are frustrated.Upul, the protester, earns a decent wage in a professional job, but says he still can’t access essentials he needs for his family. He has enough medicine to treat everyday headaches, pain and fever for now, but he worries about running out.His family has switched to induction cooking to cut down on the use of gas but frequent power cuts make even doing difficult.”Neither I nor my family or every other person in Sri Lanka deserve this,” he said. “We’ve never been this poor even with all the money we saved and earned.” 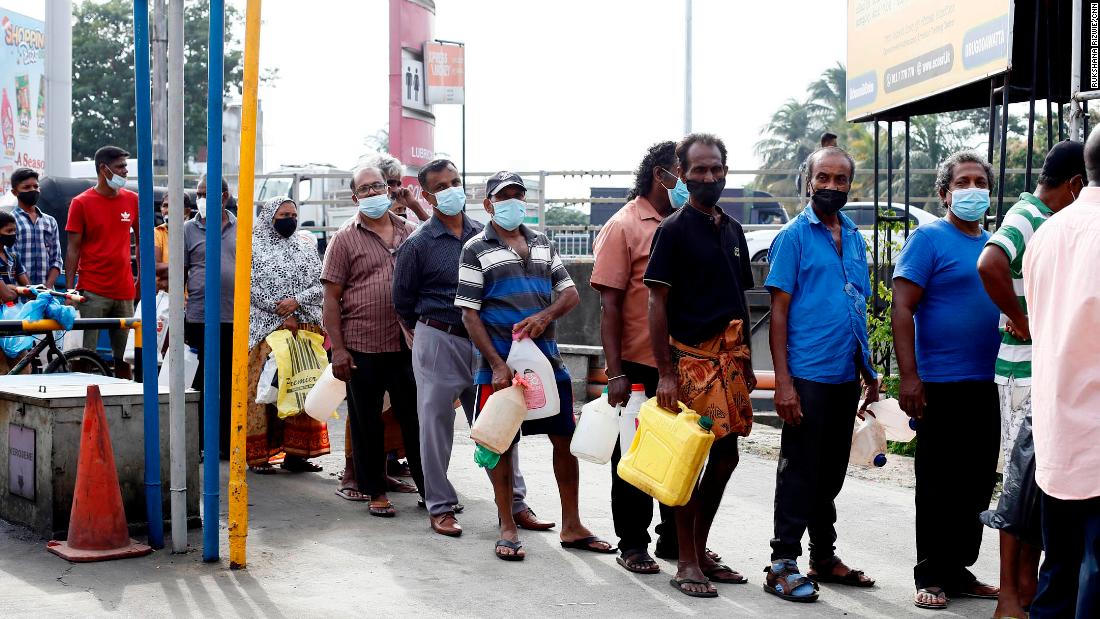 Inflation is pushing the price of food higher, putting pressure on people to earn more money to cover basic costs.

Sri Lanka is now looking for outside help to ease the economic turmoil — the IMF, India and China. During last month’s address, President Rajapaksa said he had weighed the pros and cons of working with the IMF and had decided to pursue a bailout from the Washington-based institution — something his government had been reluctant to do.”We must take action to fill this deficit and increase our foreign exchange reserves. To this end, we have initiated discussions with international financial institutions as well as with our friendly countries regarding repayment of our loan instalments,” Rajapaksa said on March 16. In a news conference Thursday, IMF spokesperson Gerry Rice told reporters: “The Sri Lankan authorities have expressed interest in an IMF-supported financial program.

There’s a lot of hate and anger against the President and the cabinet.

“We plan to initiate those discussions pretty much in the coming days, and that will include during the expected visit of the finance minister of Sri Lanka to Washington for our spring meetings in April.”Sri Lanka has also requested help from China and India, with New Delhi already issuing a credit line of $1 billion, India’s External Affairs Minister Dr S. Jaishankar tweeted on March 17. But that would just be “kicking the can down the road,” said Jafferjee, from the Advocate Institute. “This is prolonging the crisis.”Paikiasothy Saravanamuttu, executive director of the Colombo-based Center for Policy Alternatives, worries people’s frustration with the government could escalate.”It’s obviously going to have to get a lot worse before it gets better Saravanamuttu said. “There’s a lot of hate and anger against the President and the cabinet. Government lawmakers are afraid to face constituents.” 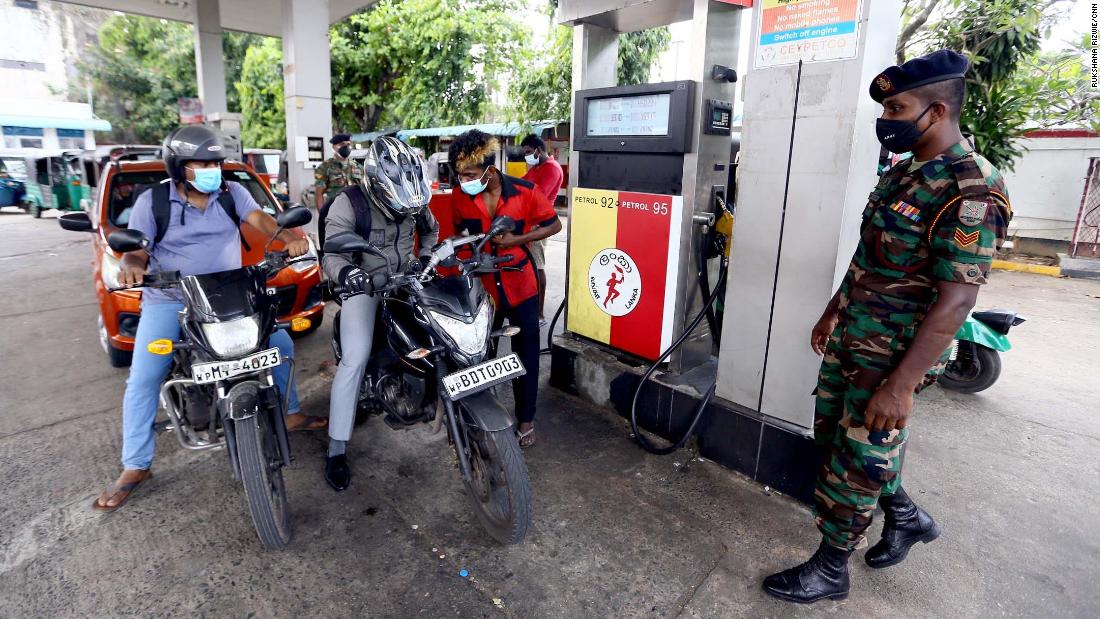 Soldiers have been deployed to gas stations to keep the peace as tensions rise. There’s still so much uncertainty around what comes next — national consumer price inflation has almost tripled from 6.2% in September to 17.5% in February, according to the country’s central bank.” The prices of essentials are changing every day,” said Silva, as she lined-up in Colombo. “The price of rice yesterday is not the price we will buy tomorrow.”Thursday’s protests — and the developments since — also raise the possibility of worse things to come. Upul, the protester, says he has been demonstrating on behalf of all Sri Lankans. But the new emergency rules make him worried.”I have been taking part in these protests and even though I was injured, I was not discouraged,” he said. “But now, with the new regulation, I am afraid.”