Yes, the Sinhalese have their origins in Bengal, Odisha

The “Mahavamsa”, arguably the greatest chronicle of Sri Lanka, narrates that the founder of the Sinhalese community had his roots among ancestors from East India.

Sinhalese, who make up about 75 percent of the Sri Lankan population has descended from inhabitants of ancient East India. REUTERS (Picture used for representational purpose)

When a few years back, a Sri Lankan envoy sought Indian support on the basis of the claim that the Sinhalese people are descendants of Bengalis and Odias, there was an upsurge of perplexity and outrage among large sections of the Indian population. However, subsequent research has shown that the Sinhalese, who make up about 75 percent of the Sri Lankan population might very well have descended from inhabitants of ancient East India.

The “Mahavamsa”, arguably the greatest chronicle of Sri Lanka, narrates an interesting episode that marks the origin of the Sinhalese people. As per the mythological record, the foundation stone of the Sinhalese community was laid by King Vijaya who had travelled there from North-West India in 543 BC and founded the first Sinhalese town by the name of Tambapani. One of the murals at the Ajanta caves carry an elaborate depiction of King Vijaya’s travel to the Sinhalese town. 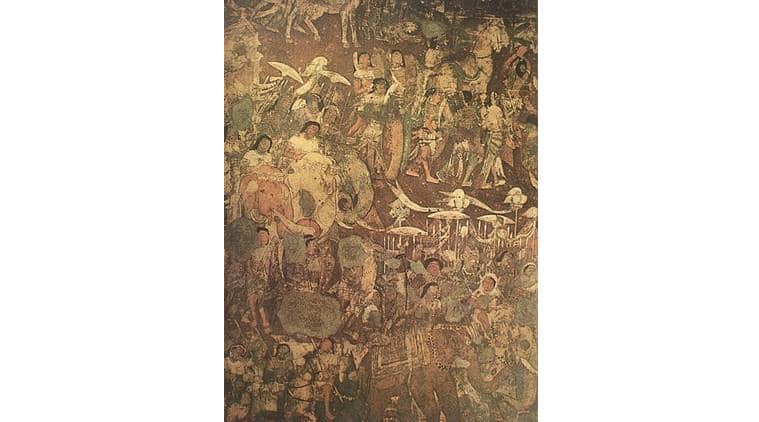 One of the murals at the Ajanta caves carry an elaborate depiction of King Vijaya’s travel to the Sinhalese town. (Source: Wikimedia Commons)

King Vijaya was the son of Sihabahu the ruler of Sihapura in Gujarat. Sihabahu’s mother in turn was the daughter of the king of Kalinga in Eastern India. The legend goes that she conceived Sihabahu (etymologically meaning lion’s arm) with a lion who had kidnapped her.

The nature of origin myths is such that it can never prove or disprove a certain theory. However, by becoming part of local folklore, they do give some indication of the way in which the Sinhalese people remember their past. In the case of the hereditary lineage of King Vijaya, while the exact details of the story may or may not be true, what can be said with certainty is that the Sinhalese community does trace some connection to present-day Bengal and Odisha. The legend gains particular currency when one realizes the importance of the lion’s symbol in Sinhalese tradition.

In a recent book, “The ocean of churn: How the Indian ocean shaped human history”, writer Sanjiv Sanyal remarks that the symbol of the lion that is so important among the Sinhalese is equally revered among the Odiyas and Bengalis. While the Narasimha (God Vishnu as half man and half lion) is worshipped in Odisha, among Bengalis the image of Goddess Durga is incomplete without the lion upon which she rides. In the opinion of Sanyal, the image of the lion on the Sri Lankan flag and the religious symbolism of the lion in Odisha and Bengal have the same cultural origins.

But it is not just mythology that reflects upon this connection. In his study titled “Genetic affinities of Sri Lankan Populations”, Gautam Kumar Kshatriya found that 25.41 percent of the genetic makeup of the Sinhalese population was contributed by the Bengalis. Linguistically too, scholars have for long remarked upon the Indo-Aryan origins of the Sinhalese speech.

In his celebrated account on the development of the Bengali language, Suniti Kumar Chatterjee comments upon the Indo-Aryan content in the Sinhalese speech in the following words: “The first immigrants who carried the Indo-Aryan speech to Ceylon seem to have been from the Western Indian coast. Later from 3rd century BC onwards, Ceylon seems to have come in touch with Magadha through Bengal and traditions of intimate connections between Bengal and Ceylon are preserved in Bengali literature.”

Historically speaking, what further seems to corroborate the link between Odisha, Bengal and Sri Lanka is the thriving trade between the two regions. While Ceylon (old name of Sri Lanka) depended upon Kalinga for the import of elephants, Kalinga imported pearl and silver from Ceylon. Records have shown that by the 5th century BC, a strong relationship had developed between the two regions as a result of the commercial ties that spread fast enough to have its impact upon the socio-cultural and political arena.

Over the years, Sri Lanka came to be inhabited by several different communities who went on to impact the genetic makeup of the population. The colonial encounters with the Portuguese, the Dutch and then the British had its impact on the local population. Genetic studies have shown that Tamils from South India have contributed to the majority of the genetic composition of present-day Sinhalese. However, the genetic, cultural and linguistic relation that the Sinhalese population shares with the Bengalis and Odiyas, though of scholarly interest, has remained largely ignored by the popular masses.