Muhammad, the founder of Islam, died in AD 632. Immediately following his death his followers exploded out of Arabia to begin their quest for world domination. Below is a list of major attacks from that time to the present. When the Ottoman Empire was defeated by Allied Powers in 1918, Islamists were no longer powerful enough to expand Islam by conquering nations. However, Muslims everywhere still dream of a one world government headed by an Islamic Caliph and governed by Sharia Law. Militant Muslims still fight continually to live this dream, while peaceful Muslims wage global jihad.

There are eight well-defined forms of Islamic jihad:

Humanitarian (charity for Muslims only; let non-Muslims starve as in-Darfur)

Lands which Muslim fighters have conquered and rule with Islamic Law are in the House of Islam: currently Iran, Saudi Arabia and Sudan. The House of War is every land where Muslims do not yet rule—and where Islamists will fight until they prevail no matter how long it takes.

Muslims who adhere to Qur’anic doctrine force everyone under their control to practice the tenets of Islam and submit to Muslim authority.

Today, high birth rates account for 96 percent of Islam’s growth, and forced conversions account for an additional 3 percent. The Muslim birth rate is 3.1 children per female of child-bearing age, compared to 1.7 for non-Muslim females — and Muslim men may keep up to four wives at a time. While Muslim populations are exploding, birth control and abortion in western countries are driving non-Muslim populations into extinction. 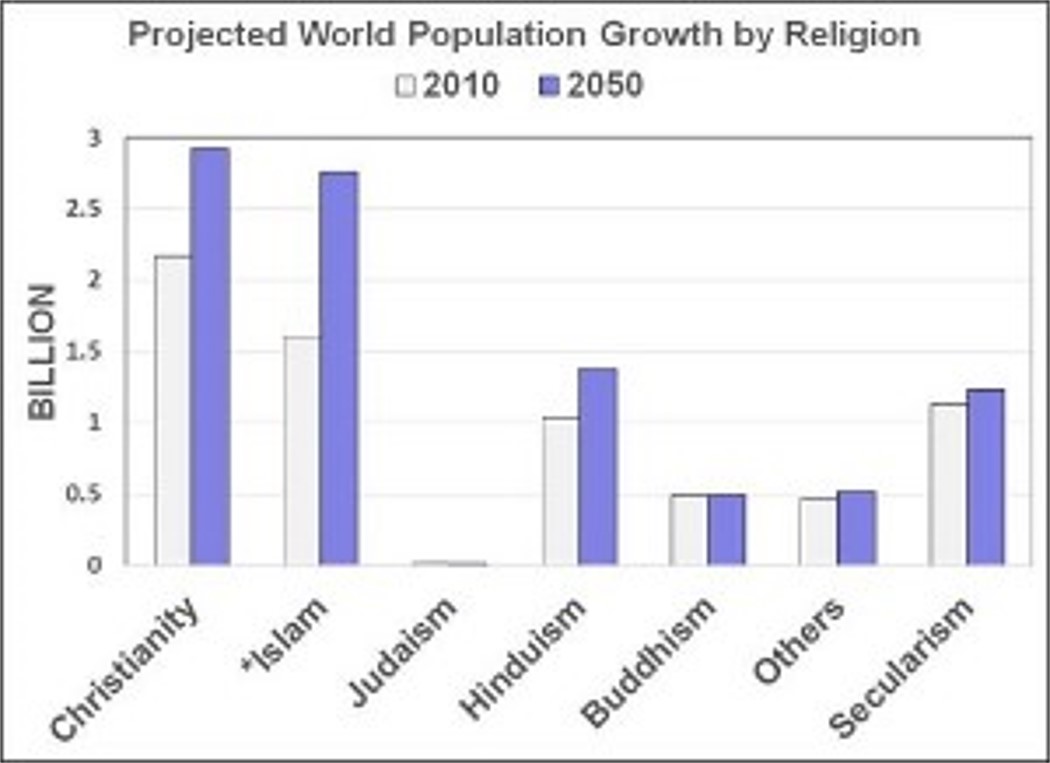 From 2001 to 2019, Islamic terrorists carried out more than 35,000 deadly attacks that killed more than 1000,000 innocent and unsuspecting civilians (https://www.thereligionofpeace.com/ ). Between the founding of Islam in 610 and 2006, Islamists murdered more than 270 million non-Muslims. (Bill Warner: The Islamic Trilogy, 2006)

If current population trends continue, Islamic jihadists will achieve their goal of world domination without having to conquer even one more country or murder even one more infidel.

Islamic nations spend a great deal of wealth to convince the world that Islam is a peaceful religion. They expertly use the Internet, newspapers, magazines, films, documentaries, radio, television, and nonprofit organizations to spread their propaganda.

Islamic attacks have but one purpose—world conquest as commanded by Allah.  Muslim attacks, migrations, invasions and conquests began shortly after the founding of Islam. Only after the last Muslim Empire (Ottoman) was defeated in WWI in 1918 did Islamists lose the power to conquer whole nations. Since then, Islamists have been conquering one house at a time, one acre of land at a time, one village at a time, one migration at a time and one terrorist attack at a time. Each committed Muslim wages jihad as if he is sent by Allah to convert, enslave or kill all infidels.

(Present-day country names are used throughout.)

624 Muslim fighters from Medina attacked and plundered a Meccan caravan, directed by Muhammad, the Prophet of Allah.

624–632 Muslim fighters conquered the Arabian Peninsula, led by Muhammad and other Muslim commanders.

645–735 Muslim fighters invaded and conquered Tbilisi and much of Georgia, led by Marwan II.

711–750 Muslim Umayyad and Abbasid armies invaded and conquered the Caucasus.

718 Muslim fighters invaded and conquered Spain, Portugal, Gibraltar, and Andorra, led by Tariq ibn Ziyad; they began preparations to attack the rest of Europe from the west, through Paris.

718 Spanish and Portuguese began the fight to reconquer their homeland from Muslim invaders (the Reconquista).

732 Franks, led by Charles Martel, halted the Muslim advance on Paris in the battle of Poitiers/Tours.

846–1830 (984 years) Muslim fighters known as the Barbary Pirates attacked ships from as far away as Iceland and the United States. They seized ships and cargoes and sold the crews into slavery in North Africa.

982 Muslim fighters defeated the German army and its allies in the battle of Stilo in Sicily.

1056 Muslim fighters expelled 300 Christians from Jerusalem and forbade further visits to the Church of the Holy Sepulcher.

1091–1099 Christians halted the Muslim advance on Vienna, then fought one of the nine Crusades to prevent Islamists from conquering all of Europe, and to allow Christian pilgrims back into the Holy Land. (Modern-day Islamic propagandists have convinced most of the world that all Crusades were unprovoked attacks by Christians on Muslims.)

1299–1453 (154 years) Muslim fighters attacked and defeated the Byzantine Empire. The first battle was in Turkey and was led by Osman I.

1444 Muslim fighters (Ottoman Turks) attacked Poland at the battle of Varna, sustained heavy losses, and withdrew to reconsider their advance on central Europe.

1453 After a siege, Muslim fighters invaded and conquered Constantinople, led by Mehmed II.

1478 Muslim fighters attacked and occupied Jakarta, the capital of Indonesia. For the next 400 years, Islam spread through intermarriages, assimilation and forced conversions.

1496 Spanish and Portuguese expelled Muslim invaders from the Iberian Peninsula after nearly 800 years of war and bloodshed.

1522 Muslim fighters invaded and conquered the island of Rhodes.

1683 The Ottomans laid siege to the city of Vienna and attacked with an army of 140,000. The city was defended by a Christian Coalition led by John III Sobieski of Poland. The Muslims suffered 15,000 dead and 5,000 captured. The Christians held and began their quest to regain control over Europe.

1683–1918 (235 years) Decline and dissolution of Ottoman Empire: When it was unable to conquer more territory and steal more wealth to finance its wars, the Ottoman Empire went into a period of gradual decline. It faced dissension, nationalism, and outright rebellion in most of its conquered territories. Muslim fighters continued their attacks, however, until the Allies defeated the Ottomans in WWI.

1798 French army defeated invading Muslims at the Battle of Pyramids in Egypt.

1894–1916 Islamists from the crumbling Ottoman Empire again waged war against Armenians, murdering 1.5 million of them. They pillaged and razed 568 Christian churches and converted 282 of them into mosques. They tortured and murdered twenty-one Protestant Preachers and 170 Gregorian Priests for refusing to convert to Islam. (These are the documented cases.)

1914–1918 The Ottoman Empire sided with the Central Powers in WWI, which ended in victory for the Allies. In the aftermath, the Empire was partitioned and placed under temporary rule of Britain and France by League of Nations mandates.

Circa 1950 WWI mandates expired and Islamic nations around the world resumed their wars of conquest.

1998 Muslim fighters suicide-bombed US embassies in Kenya and Tanzania, killing 214 and wounding more than 5,000.

2001 Muslim fighters flew hijacked passenger planes into the World Trade Center in New York and the Pentagon near Washington, DC, killing 3,017 and wounding 6,291.

2001 Muslim fighters hijacked an American airliner at Newark Airport and crashed it into a field in Pennsylvania, killing all forty on board.

2004 Muslim fighters took 1,100 hostages at a school in North Ossetia, Russia, resulting in the deaths of more than 300, including 186 children.

2006 Somali pirates began hijacking ships on the high seas and holding crews for ransom. Pirating has continued through 2017, and there is no expectation it will stop anytime soon.

2009 Muslim fighters expelled all relief agencies from the Darfur region of Sudan—with the intent of starving one million non-Muslims to death.

2010 Islamists announced plans to build a victory monument near “ground zero” in New York City to celebrate the killing of 3,000 infidel Americans on 9/11/2001.

2014 The Islamic State moved into Egypt’s Sinai Peninsula after receiving a pledge of allegiance from militant group Ansar Bayt al-Maqdis.

2014 April: Muslim fighters kidnapped 276 girls, age 14-18 from their dormitories in Chibouk, Nigeria and sold a number of them in slave and sex markets for as little as $13.50 each.

2014 June: Abu Bakr al-Baghdadi declared himself Caliph over Muslims worldwide and established the Islamic State. By November 2015 his armies had conquered much of Syria and Iraq; invaded Libya, Yemen and the Sinai Peninsula; and had attacked cities in Lebanon, France and Mali. Untold numbers were tortured and murdered; millions of refugees have fled to other countries.

2015 November: The Islamic State attacked a concert, a soccer game and a restaurant in Paris, France, killing 130 innocent civilians.

2015 December: A Muslim married couple of Pakistani descent murdered 14 and seriously injured 22 who were attending a Christmas party in San Bernardino, California.

2015 Boko Haram Muslims slaughtered more than 2,300 Christians in Nigeria in one year.

2015-2017 A coalition of seventy-three countries drove the Islamic State out of Iraq and Syria. Raqqa, the IS capital, fell in October 2017.

2016 Boko Haram Muslim terrorists continued their slaughter of Christians in Nigeria and began using women and children as suicide bombers.

2016 March Muslim fighters killed 78 Christians and injured 362 others while they were attending Easter worship services.

2016 April A Muslim terrorist rammed a truck into crowds in Nice, France, killing 86 and injuring 202.

2016 June A Muslim terrorist murdered 49 and injured 53 at an Orlando, Florida night club.

2016 November Muslim terrorists slaughtered 52 and injured 105 at a Sufi Shrine in Pakistan.

2017 February Muslim terrorists slaughtered 88 and injured 250 at a Sufi Shrine in Pakistan.

2017 May A Muslim terrorist set off a bomb at a concert in Manchester, England, killing 22 and injuring 119.

2017 August A Muslim terrorist rammed a van into a crowd in Barcelona, killing 14 and injuring 130.

2019 March  A pastor and his wife were among 46 villagers massacred by Muslim Fulani terrorists in Angurwan Gamu, Nigeria.

Muslim fighters wage jihad against all secular governments. They send fighters wherever and whenever their leaders see an opportunity to gain more territory.

Since it was driven out of Iraq and Syria, the Islamic State has used social media and encrypted email networks to plan and direct terrorist attacks throughout the world.

There were no known Muslims in the western hemisphere until the nineteenth century, but they are currently waging jihad in all of them.

When Muslim groups become powerful enough to elect an Islamic government, they declare all religions unlawful except Islam. Then, Islamic overseers begin jailing and torturing proselytizers, especially Christians, until none but Muslims remain.

https://stephenblanton.com/growth/?gclid=Cj0KCQjwt_nmBRD0ARIsAJYs6o05eddwEqYLwe8ha9l3jNSGe0ipww_hANzcOAnFglte4f4cdMJLAxYaArDMEALw_wcB
About editor 2673 Articles
Writer and Journalist living in Canada since 1987. Tamil activist.