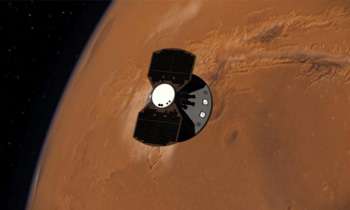 InSight’s two-year mission will be to study the deep interior of Mars to learn how all celestial bodies with rocky surfaces, including Earth and the Moon, formed.

InSight launched from Vandenberg Air Force Base in California May 5. The lander touched down Monday, Nov. 26, near Mars’ equator on the western side of a flat, smooth expanse of lava called Elysium Planitia, at 11:52:59 a.m. PST (2:52:59 p.m. EST).

“Today, we successfully landed on Mars for the eighth time in human history,” said NASA Administrator Jim Bridenstine. “InSight will study the interior of Mars and will teach us valuable science as we prepare to send astronauts to the Moon and later to Mars. This accomplishment represents the ingenuity of America and our international partners, and it serves as a testament to the dedication and perseverance of our team. The best of NASA is yet to come, and it is coming soon.”

The landing signal was relayed to NASA’s Jet Propulsion Laboratory (JPL) in Pasadena, California, via NASA’s two small experimental Mars Cube One (MarCO) CubeSats, which launched on the same rocket as InSight and followed the lander to Mars. They are the first CubeSats sent into deep space. After successfully carrying out a number of communications and in-flight navigation experiments, the twin MarCOs were set in position to receive transmissions during InSight’s entry, descent and landing.

“We hit the Martian atmosphere at 12,300 mph (19,800 kilometres per hour), and the whole sequence to touching down on the surface took only six-and-a-half minutes,” said InSight project manager Tom Hoffman at JPL. “During that short span of time, InSight had to autonomously perform dozens of operations and do them flawlessly — and by all indications that is exactly what our spacecraft did.”

Confirmation of a successful touchdown is not the end of the challenges of landing on the Red Planet. InSight’s surface-operations phase began a minute after touchdown. One of its first tasks is to deploy its two decagonal solar arrays, which will provide power. That process begins 16 minutes after landing and takes another 16 minutes to complete.

“We are solar powered, so getting the arrays out and operating is a big deal,” said Tom Hoffman at JPL. “With the arrays providing the energy we need to start the cool science operations, we are well on our way to thoroughly investigate what’s inside of Mars for the very first time.”

InSight will begin to collect science data within the first week after landing, though the teams will focus mainly on preparing to set InSight’s instruments on the Martian ground. At least two days after touchdown, the engineering team will begin to deploy InSight’s 5.9-foot-long (1.8-meter-long) robotic arm so that it can take images of the landscape.

“Landing was thrilling, but I’m looking forward to the drilling,” said InSight principal investigator Bruce Banerdt of JPL. “When the first images come down, our engineering and science teams will hit the ground running, beginning to plan where to deploy our science instruments. Within two or three months, the arm will deploy the mission’s main science instruments, the Seismic Experiment for Interior Structure (SEIS) and Heat Flow and Physical Properties Package (HP3) instruments.”

InSight will operate on the surface for one Martian year, plus 40 Martian days, or sols, until Nov. 24, 2020. The mission objectives of the two small MarCOs which relayed InSight’s telemetry was completed after their Martian flyby.

“That’s one giant leap for our intrepid, briefcase-sized robotic explorers,” said Joel Krajewski, MarCO project manager at JPL. “I think CubeSats have a big future beyond Earth’s orbit, and the MarCO team is happy to trailblaze the way.”

With InSight’s landing at Elysium Planitia, NASA has successfully soft-landed a vehicle on the Red Planet eight times.

“Every Mars landing is daunting, but now with InSight safely on the surface, we get to do a unique kind of science on Mars,” said JPL director Michael Watkins. “The experimental MarCO CubeSats have also opened a new door to smaller planetary spacecraft. The success of these two unique missions is a tribute to the hundreds of talented engineers and scientists who put their genius and labour into making this a great day.”

JPL manages InSight for NASA’s Science Mission Directorate. InSight is part of NASA’s Discovery Program, managed by the agency’s Marshall Space Flight Center in Huntsville, Alabama. The MarCO CubeSats were built and managed by JPL. Lockheed Martin Space in Denver built the InSight spacecraft, including its cruise stage and lander, and supports spacecraft operations for the mission.

A number of European partners, including France’s Centre National d’Études Spatiales (CNES) and the German Aerospace Center (DLR), are supporting the InSight mission. CNES, and the Institut de Physique du Globe de Paris (IPGP), provided the SEIS instrument, with significant contributions from the Max Planck Institute for Solar System Research (MPS) in Germany, the Swiss Institute of Technology (ETH) in Switzerland, Imperial College and Oxford University in the United Kingdom, and JPL. DLR provided the HP3 instrument, with significant contributions from the Space Research Center (CBK) of the Polish Academy of Sciences and Astronika in Poland. Spain’s Centro de Astrobiología (CAB) supplied the wind sensors. (mars.nasa.gov) 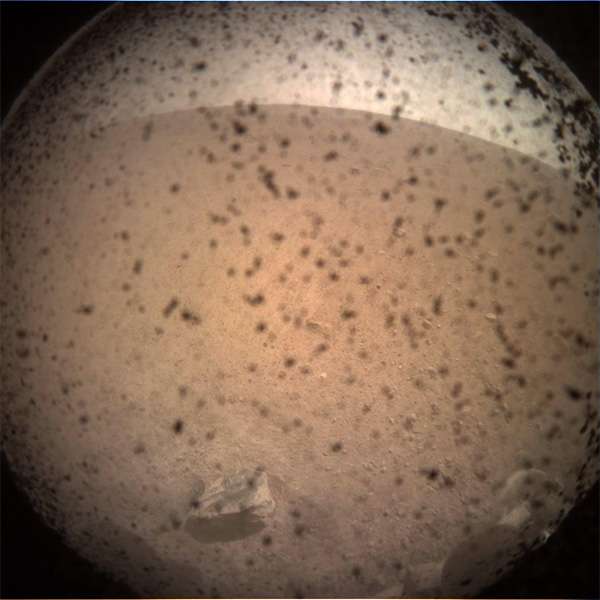 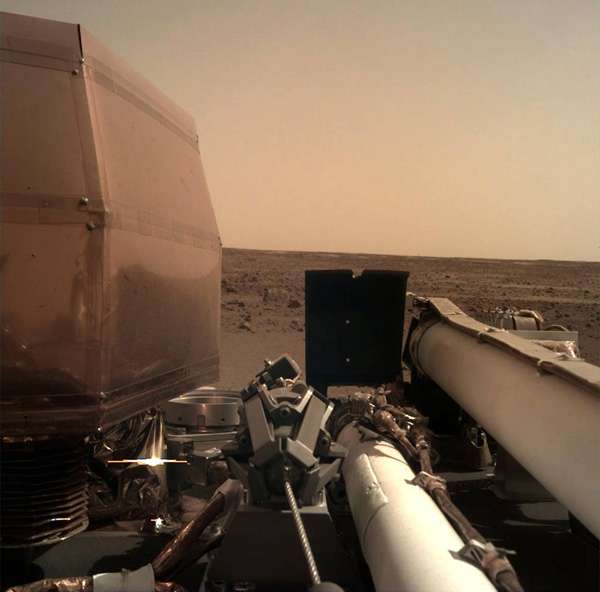 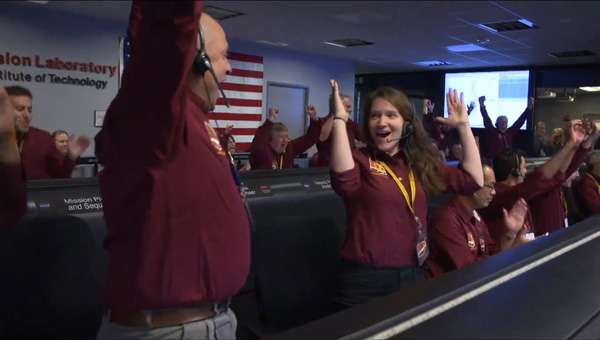 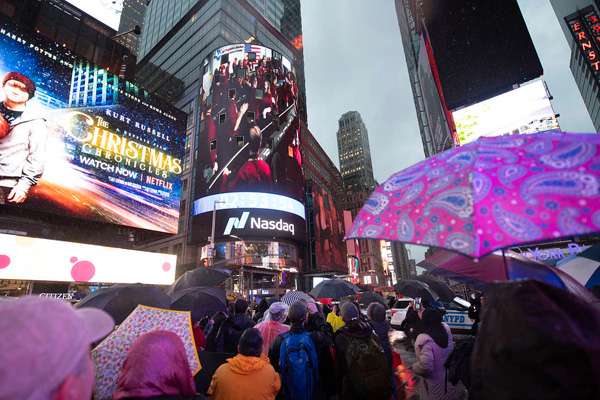 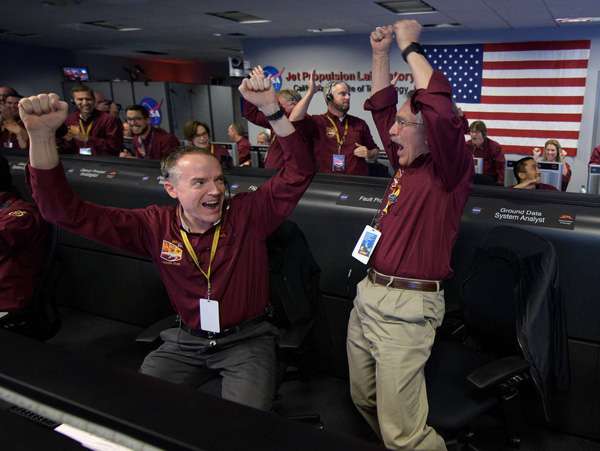 An image transmitted from Mars by the InSight lander is seen on a computer screen at NASA’s Jet Propulsion Laboratory on November 26, 2018, in Pasadena, California.   | Photo Credit: NASA via AP

NASA last landed on Mars in 2012 with the Curiosity rover.

A NASA spacecraft designed to burrow beneath the surface of Mars landed on the red planet Monday after a six-month, 300 million-mile (482 million-kilometre) journey and a perilous, six-minute descent through the rose-hued atmosphere.

Flight controllers at NASA’s Jet Propulsion Laboratory in Pasadena, California, leapt out of their seats and erupted in screams, applause and laughter as the news came in.

The three-legged InSight spacecraft reached the surface after being slowed by a parachute and braking engines, the space agency said. Updates were coming in via radio signals that take more than eight minutes to cross the nearly 100 million miles (160 million kilometres) between Mars and Earth.

It was NASA’s ninth attempt to land at Mars since the 1976 Viking probes. All but one of the previous U.S. touchdowns were successful.

NASA last landed on Mars in 2012 with the Curiosity rover.

Viewings were held coast to coast at museums, planetariums and libraries, as well as New York’s Times Square.

The plan called for the spacecraft to go from 12,300 mph (19,800 kph) to zero in six minutes flat as it pierced the Martian atmosphere and settled on the surface.

“Landing on Mars is one of the hardest single jobs that people have to do in planetary exploration,” said InSight’s lead scientist, Bruce Banerdt. “It’s such a difficult thing, it’s such a dangerous thing that there’s always a fairly uncomfortably large chance that something could go wrong.”

Mars has been the graveyard for a multitude of space missions. Up to now, the success rate at the red planet has been only 40 per cent, counting every attempted flyby, orbital flight and landing by the U.S., Russia and other countries since 1960.

The U.S., however, has pulled off seven successful Mars landings in the past four decades, not counting InSight, with only one failed touchdown. No other country has managed to set and operate a spacecraft on the dusty red surface.

InSight was shooting for Elysium Planitia, a plain near the Martian equator that the InSight team hopes is as flat as a parking lot in Kansas with few, if any, rocks.

This is no rock-collecting expedition. Instead, the stationary 800-pound (360-kilogram) lander will use its 6-foot (1.8-metre) robotic arm to place a mechanical mole and seismometer on the ground. The self-hammering mole will burrow 16 feet (5 metres) down to measure the planet’s internal heat, while the seismometer listens for possible quakes.

Nothing like this has been attempted before at our next-door neighbour, nearly 100 million miles (160 million kilometres) away. No lander has dug deeper than several inches, and no seismometer has ever worked on Mars.

By examining the interior of Mars, scientists hope to understand how our solar system’s rocky planets formed 4.5 billion years ago and why they turned out so different — Mars cold and dry, Venus and Mercury burning hot, and Earth hospitable to life.

InSight has no life-detecting capability, however. That will be left to future rovers. NASA’s Mars 2020 mission, for instance, will collect rocks that will eventually be brought back to Earth and analysed for evidence of ancient life.