In June 2007 Tamils living in lodges in Colombo were forcibly deported from the city by the Police and sent back to the North and East. Filed an application in the Supreme Court that morning itself with only newspaper reports as evidence and supported the same day in open court. The Supreme Court issued an interim order to stop the evacuation and they were brought back to Colombo by the next morning. The then Prime Minister apologized in Parliament for the incident. 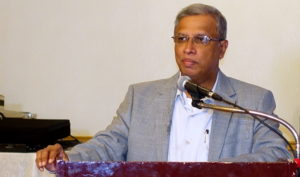 The case challenging the Vavuniya pass system that was in operation since 1993. Appeared for the Petitioner, Peter Vadivelu, a refugee from the Sithamparapuram Refugee Camp, who petitioned the Supreme Court that his fundamental rights were violated by the requirement to obtain travel passes to travel to Colombo. On 5th September 2003, the Supreme Court ordered that the pass system was illegal.

Appeared for Mavai Senathirajah then General Secretary of the Ilankai Thamil Arasu Kadchi in challenging this on the basis, inter alia¸ that it had not been referred to the Northern Provincial Council which was not constituted at that time. The Supreme Court held that the Constitution required that the Bill should be referred by the President to all Provincial Councils.

The abovementioned Bill, if passed would have given the Minister of Buddha Sasana and Religious Affairs vast powers over any private property in the country. Appeared for Petitioner seeking to challenge this Bill and argued, inter alia, that land was a devolved subject and that thus, the Bill could not be passed unless it was referred to Provincial Councils. The Supreme Court upheld this argument. Following this, the government withdrew the said Bill.

Appeared for Mavai Senathirajah then General Secretary of the Ilankai Thamil Arasu Kadchi challenging the Divineguma Bill. The Supreme Court stated that the bill had to be sent to the Provincial Councils for consent as some powers it involved related to certain specific powers conferred upon Provincial Councils.

Appeared in a second application for the same Petitioner and challenged the consent given by the Governor of the Northern Province in behalf of the Northern Provincial Council. The Supreme Court upheld the argument that the Governor could not stand in the shoes of the Provincial Council. It is the ruling in these cases that led to the Chief Justice Shirani Bandaranyake bein g impeached by the Rajapakshe government.

Appeared for the Ilankai Thamil Arasu Kadchi in a challenge to a bill seeking to ban and prohibit political parties which identify themselves with a particular ethnicity or religion and succeeded.

Appeared for 225 depositors of the Pramuka Bank in the case relating to the Bank’s liquidation.

Appeared for Petitioner challenging Bill. Argued, inter alia, that if the Water Services Reforms Bill was enacted, people would have to pay much more for pipe borne water. Further stated that water is a natural resource that should remain under state control. The Supreme Court recognized in this case that reference by the President to the Provincial Councils of Subjects in the Provincial Council list is mandatory.

Appeared in several cases for Petitioners challenging the purported impeachment of Chief Justice Shirani Bandranayake. Finally appeared before the 5 judge bench of the Supreme Court for R Sampanthan.

In 2007, appeared for Petitioner in the above case challenging the mass arrests of Tamils. Court issued a directive that searches cannot be conducted in houses at night. Various provisions were also brought in regarding arrests. The case resulted in a process that started releasing prisoners on various conditions, including on bail.

Appeared for the journalist J. S. Tissainayagam who was arrested on 7th March 2008 by the Terrorist Investigation Division. Tissainayagam’s indictment in August 2008 was based on passages from articles published two years earlier in which he had expressed critical opinions about the government’s treatment of Tamil civilians affected by armed conflict. A July 2006 editorial concluded that “It is fairly obvious that the government is not going to offer them any protection. In fact it is the state security forces that are the main perpetrator of the killings.” A second article published in November 2006 addressed the humanitarian situation in the eastern town of Vakarai, where actions by government forces included attacks on civilian areas and an extended military siege aimed at driving the LTTE out of the area. The article accused the Sri Lankan government of starving and endangering civilians to further political and strategic military objectives.

Appeared for Vithyatharan who was abducted and illegally arrested by the police. Following this purported arrest being challenged in Court Vithyatharan was released.

Anton Judes was a victim of police torture while in custody. This torture eventually resulted in him losing sight in both his eyes. Appeared for Jude in several matters, including a fundamental rights case and a civil action he filed seeking damages

Appeared on behalf of 2 staff members of TNA MP Shritharan who were purportedly arrested and detained by the police. The application challenged the purported arrest and detention as illegal on the grounds that it was made for political reasons, as revenge for statements made by MP Shritharan criticising the government in relation to its recruitment of women to the Sri Lankan Army.

Appeared for Sivalingam, a priest from Kilinochchi who was tortured while in police custody.

Appeared for Petitioners whose land in Sampur was illegally taken over by the Board of Investment and leased to a private company. While the case was pending in Court the land was released back to the people who owned them by President Sirisena by way of a Government Gazette. This Gazette was challenged by the said private company in question in SCFR 167/2015. Appeared for the landowners (the petitioners in SCFR 309/2012) who sought to intervene in SCFR 167/2015. The court dismissed SCFR 167/2015, permitting the lands to be returned to the rightful owners.

Appeared for 2176 Petitioners who challenged the purported acquisition of lands in the Jaffna peninsula. Also appeared for the Bishop of Jaffna who filed a similar application with regard to 54 lands owned by him. The area of land in question was equivalent to two-thirds of the entire city of Colombo.

Filed an application as Petitioner challenging a purported circular titled ‘Regulating the Activities Regarding Management of Lands in the Northern and Eastern Provinces’ (Circular No: 2011/04) that was to be implemented in the Northern province. The case was settled on the State undertaking not to implement the circular.

Appeared for Petitioners challenging the takeover of their private land in Trincomalee by the security forces.

Appeared for several Tamil students who were denied entrance into Sri Lanka Law College as a result of a discriminatory policy adopted by the Council of Legal Education and obtained entrances for them.

Appeared for students from the Jaffna district who filed a fundamental rights violation application alleging discrimination in admitting students to Medical faculties.

Appeared for Petitioners from Jaffna and Kilinochchi who were rejected from the post of a graduate trainee. Petitioners claimed that this was discrimination and a violation of their fundamental rights.

Appeared for petitioners who had applied for the post of Management Assistants in the Eastern Province but were not being considered due to a purported policy of the Government at the time that no Tamils would be appointed to the post for the next 3 years. Subsequently, the State agreed to grant appointments to the Petitioners.

Appeared for petitioners who had applied for the post of Development Officers in the Eastern Province but were not being considered due to a purported policy of the Government at the time that no Tamils would be appointed to the post for the next 3 years. Subsequently, the State agreed to grant appointments to the Petitioners.

Appeared for Petitioners complaining of the fact that important pieces of legislation passed prior to 1978 such as the Penal Code have not been translated into Sinhala and Tamil. Following this, the State filed a report indicating plans to have such legislation translated by the year 2017.

Appeared for Petitioner challenging the fact that the NIC was issued in only one of the national languages (Sinhala) although according to the Constitution it should be in both languages. Following this, the State indicated that arrangements are being made to issue electronic NICs in all three languages.

Appeared for Petitioners challenging the fact that the legal tender of Sri Lanka’s currency is printed only in Sinhala. Following this State gave an undertaking that new currency will be in both official/national languages.

Appeared for Petitioner in a fundamental rights petition in which she claimed that the fact that the Institute of Human Resource Advancement, University of Colombo offered a course in Sinhala and not in Tamil was in violation of her fundamental rights.

Appeared for Petitioners who during the 2001 General elections were prevented from entering the cleared area by the army purportedly in the interest of national security and to ensure “free and fair elections” by preventing alleged infiltration of LTTE. Court held that to bar the petitioners (or a total of about 55,000 voters) from voting was mala fide for extraneous reasons probably to prevent voters from voting for the candidates of their choice. Thereby the petitioners’ right to freedom of movement guaranteed by Article 14(1)(h) of the Constitution was infringed. The impugned restriction which precluded the petitioners from voting at the Election violated their freedom of expression under Article 14(1)(a) of the Constitution which freedom is a collective right enjoyed by them with all other voters.

Appeared in several cases representing Uthayan publications in cases filed against them for news/articles reporting on issues of great concern in the North including killings, disappearances, attacks on the media and actions of the army. These include defamation cases filed by former MP Douglas Devananda, Army Commander Lieutenant General Jagath Jayasuriya and Major General Mahinda Hathurusinghe.

Appeared for Petitioner in a case challenging the depiction of then incumbent President Mahinda Rajapaksa on the 1000 rupee note months prior to the 2010 Presidential election as a violation of election laws.

Appeared for lecturers of various Universities including the Eastern University (SCFR 528/2012) who were being victimized as a result of engagement in the strike action conducted at the time (eg: false charges being brought against them, being denied leave unless they gave written confirmation that they would not engage in strike action etc.)

Appeared on behalf of Petitioners in fundamental rights petitions challenging the decision of the Higher Education Ministry to allegedly compel /coerce students, who are eligible to enter university, into undergoing in-house training within military camps.