Chief of Defence Staff Admiral Ravindra Wijegunaratne, who is currently at the centre of the case involving the abductions and killings of 11 youth, made a public appearance with President Maithripala Sirisena at the Nelum Pokuna Theatre yesterday. 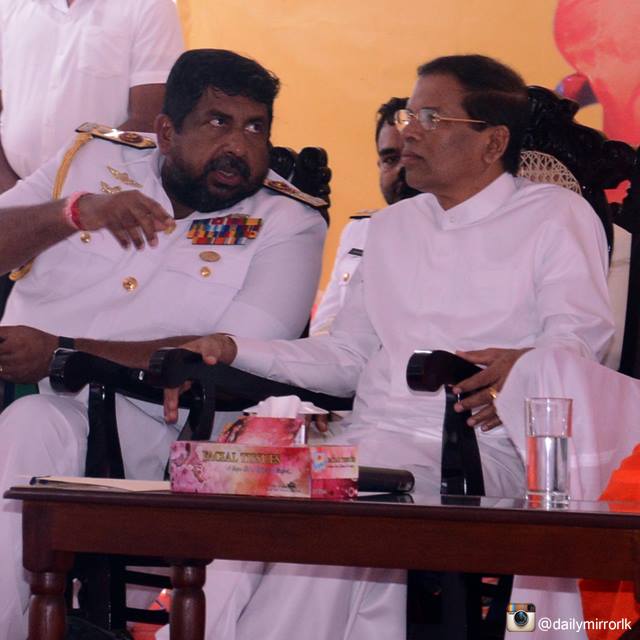 Sirisena and Wijegunaratne were seen sharing the stage together at the ‘Sathviru Abhiman’ military welfare event in Colombo, attended by soldiers and their family members.

The event took place a day before the case relating to the killings of the 11 youth came before the Colombo Fort Magistrate. On behalf of the CID, IP Nishantha Silva informed Fort Magistrate Lanka Jayaratne that they had sufficient evidence to arrest Admiral Wijegunaratne for helping Chandana Hetiarachchi alias Navy Sampath, the main suspect in the case, abscond the law enforcement authorities.

When the Magistrate asked why Admiral Wijegunaratne had not been arrested so far, Silva said he would be summoned before the CID next week.

It is a widely known fact that it was President Sirisena who stood in the way of the CID when it attempted to arrest Wijegunaratne on two occasions.

On the first occasion, Sirisena sent Wijegunaratne as his representative to Mexico to take part in the country’s national day celebrations. The Chief of Defence Staff left the country just hours before he was due to make an appearance before the CID.

On the second occasion, Sirisena directly ordered IGP Pujith Jayasundara and senior officers of the Police to refrain from arresting senior military officers such as Wijegunaratne over “unwanted charges.” This discouraged the Police from pursuing further action on Wijegunaratne who is facing serious criminal charges.

Colombo Telegraph previously reported that suspicions had arisen whether Sirisena’s unconditional backing of Wijegunaratne is due to the latter’s involvement in purchasing of a Russian warship for double the price of its actual value, through a Rs. 20 billion deal with Russia’s war machinery, JSC Rosoboronexport.

Wijegunaratne ascended to the position of Navy Commander as his predecessor, Admiral Travis Sinnaiah, was forced to retire by Sirisena due to his opposition to the purchase of the Russian ship.

Wijegunaratne was also saved by the government when he assaulted a journalist who was covering a protest in the Hambantota harbour in December 2016. Although he was caught on camera while assaulting a journalist who was on duty, Wijegunaratne, the then Commander of the Sri Lanka Navy, went unpunished as the President and Prime Minister Ranil Wickremesinghe looked the other way.