The Final Stages of War and the Fate of LTTE Surrenders!

(Some pictures are very disturbing. Viewer discretion is advised)

This is the story of the killing or disappearance of several groups of the Liberation Tigers of Tamil Eelam (LTTE) who surrendered to the Sri Lankan army on or about 18 May 2009 at the end of Sri Lanka’s civil war. They were told by the government if they carried a white flag they would be safe crossing the frontline. But when they surrendered it became apparent they had been lured into a trap. Several were executed in cold blood – others have never been seen since.

The surrender of the political leaders of the LTTE – Pulidevan and Nadesan – is commonly known as “the white flag incident”. It involved approximately twelve people surrendering, including the leaders. Photographs of their dead bodies later appeared.

There was, however, more than one white flag incident. At least 103 other LTTE leaders and those associated with them were seen later that day surrendering while unarmed. Some were led by an elderly Catholic priest called Father Francis Joseph; witnesses saw them loaded onto a bus under army guard. They have not been seen since and are presumed to have been disappeared by the Sri Lanka security forces.

An analysis of the available evidence points to an organised government plan at the highest level not to accept the surrender of the top civilian, administrative and political leadership of the LTTE – but rather to execute them. In the immediate aftermath of the surrenders, the Sri Lankan government presented a number of contradictory explanations for the killings of the political wing leaders but none for the other people who disappeared.

Five years on, the families of the disappeared and dead desperately need to know what happened to their loved ones and why.

The President’s brother, Basil Rajapaksa, allegedly took the lead in the negotiation of the surrender of the political leaders. He reportedly had the surrender deal approved by his siblings – President Mahinda Rajapaksa and the defence secretary, Gotabaya Rajapaksa.

The Permanent Representative to the UN mission, Palitha Kohona, who was then foreign secretary, is alleged to have played a key role, sending text messages to the LTTE with instructions on how to surrender safely.

An eyewitness saw Shavendra Silva (seen in the next photo pointing at the corpses) accepting the surrender of the political leaders. Silva is now Mr Kohona’s deputy at the United Nations. 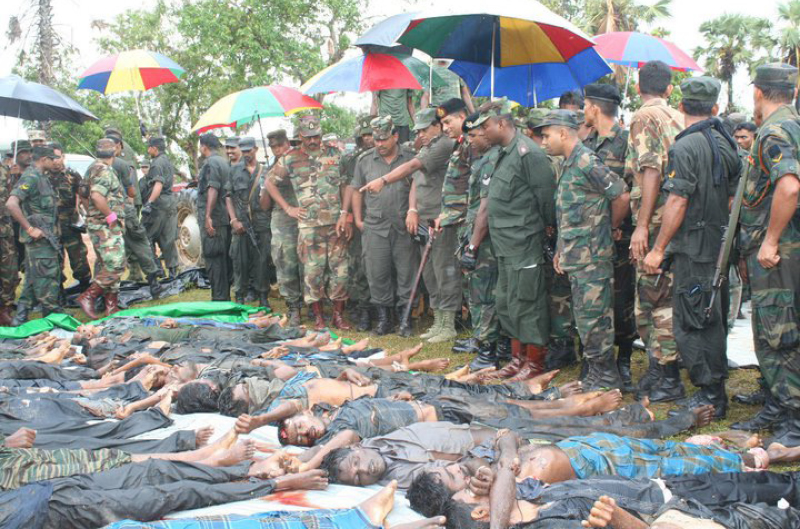 Shavendra Silva pointing at the bodies of other dead LTTE fighters, standing next to Army Commander, Jagath Jayasuriya in camouflage and on his other side Major General Jagath Dias (later to be deputy Ambassador to Germany). 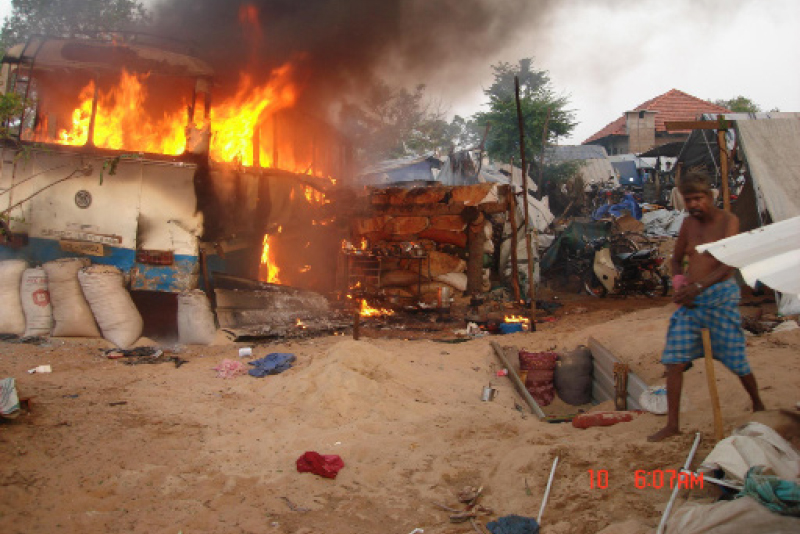 This report is compiled based on new evidence in addition to existing evidence gathered from a range of sources including the UN Panel of Experts, ICEP and media reports.

The last months of Sri Lanka’s long-running civil war saw an unprecedented slaughter of minority Tamil civilians. The United Nations now estimates between 40-70,000 people died in five months in a tiny corner of the north-east of the island. That makes Sri Lanka one of the bloodiest wars this century and yet the least reported of mass atrocities.

The fighting took place around a series of shrinking “no fire zones” declared by the Sri Lankan government. These were designated areas where civilians were told to gather to avoid being harmed. However, these three “no fire zones” where tens of thousands of civilians congregated were repeatedly shelled and bombed by government forces.

Hundreds of thousands of people were constantly on the move for months, trying to escape the fighting. They finally gathered on a tiny spit of land along the coast. They camped out on the hot sandy beaches, digging trenches and chopping up their best wedding saris to make sandbags.

By May 2009 the situation in the conflict zone had become utterly desperate.

Every makeshift hospital had been shelled. A handful of doctors were left, doing amputations without anaesthetic or antibiotics which the government refused to allow in. People were starving because the government would not allow enough food in. Civilians were being pounded by supersonic jets and heavy artillery including multi-barrelled rocket launchers. Everyone had witnessed death and few thought they’d survive the carnage. 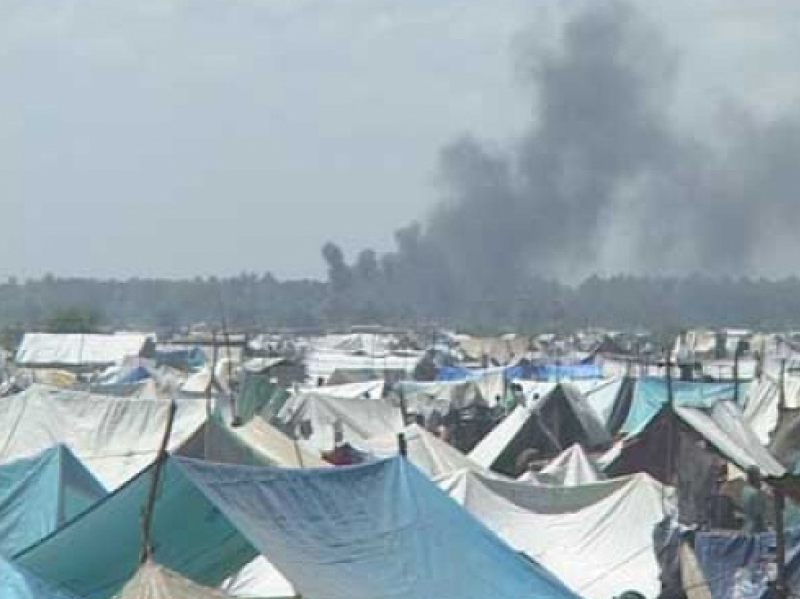 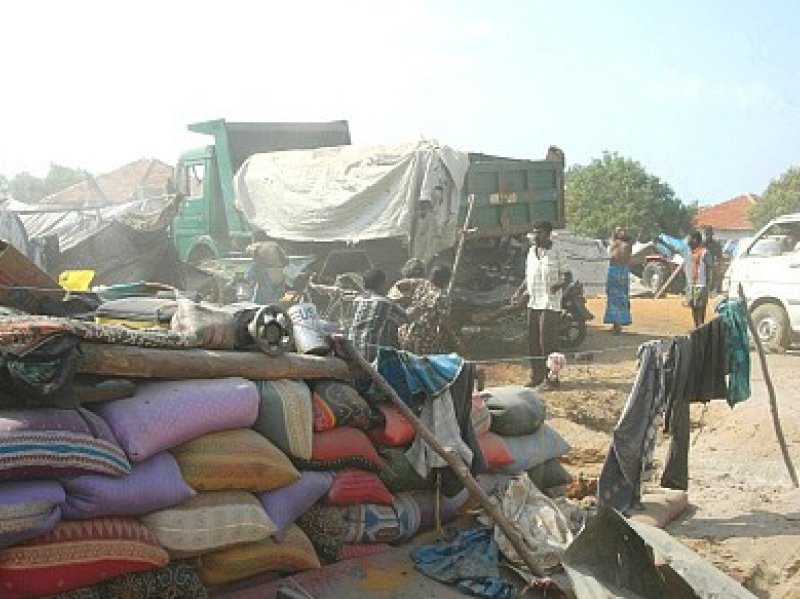 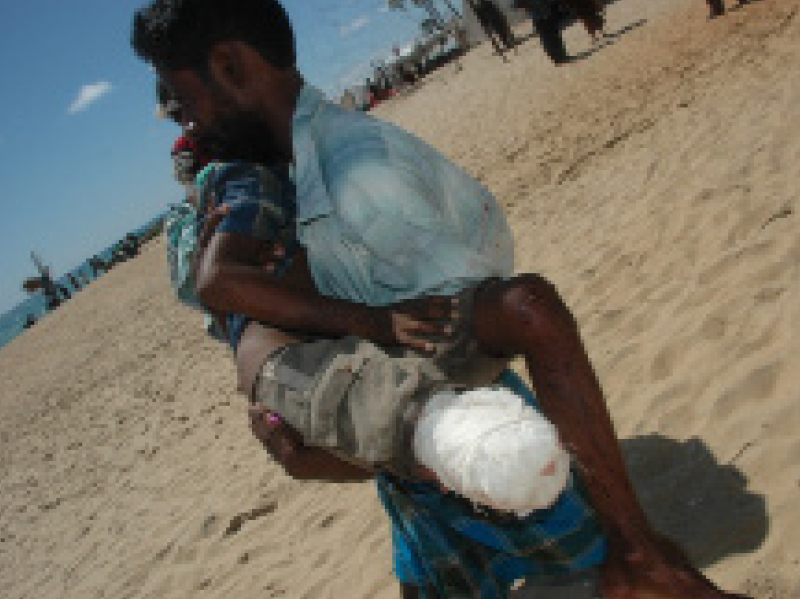 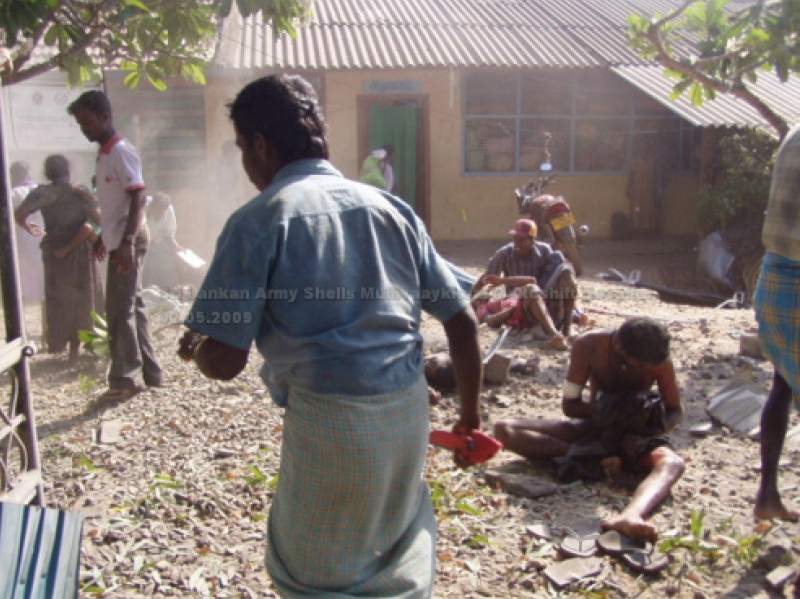 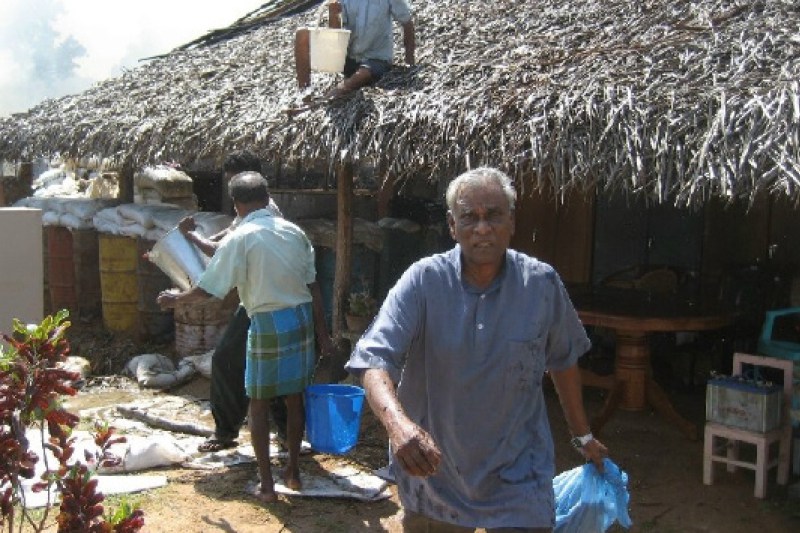 The scale of the tragedy is revealed in a rare letter sent out of the war zone. It came from an elderly Catholic priest, Father Francis Joseph seen in the foreground of this photograph during the war.

“Last night’s toll of the dead is 3318 and of the injured more than 4000. It was a barrage of artillery, mortar, multi-barrel shelling and cluster bombs, weapons which Sri Lankan government denies using on the civilians in the no-fire zone. The cries of woes and agony of the babies and children, the women and the elderly fill the air that was polluted by poisonous and unhealthy gases and pierced the hearts of fathers and mothers, of elders and peasants of old men and women of all walks of life. I am not unaware that this letter would arouse the wrath of the Sri Lankan government which will resort to the revenge by killing me.“

On 10th May 2009, a Catholic priest inside the war zone, Father Francis, wrote to the Pope in Rome describing what he was experiencing.

By the time Father Francis wrote his letter to the Pope on 10 May it was already clear that the LTTE was defeated. From once having controlled nearly a third of the island, they now were crammed into an area little more than 3 kilometres square. The LTTE were reportedly running out of ammunition and manpower and were forcibly recruiting civilians who didn’t want to fight. The war only had a week to go.

By 14th May discussions began on a possible surrender. A day later, fighters report the LTTE leader sent a message to his cadres saying they could if they wanted to try and escape. Some fighters took off their uniforms, laid down their weapons, and mixed with their families and the fleeing civilians hoping they’d pass undetected.

The LTTE leadership had to make a choice whether to fight to the end or surrender. They decided that the political wing leader, Nadesan, and his deputy, Pulidevan, should negotiate a surrender and take with them the injured and others who wanted to lay down their arms.

In the course of the negotiations for surrender, the two men started sending out messages back and forth to a range of Sri Lankan politicians and diplomats and a journalist.

They sought and received guarantees that they would not be harmed. 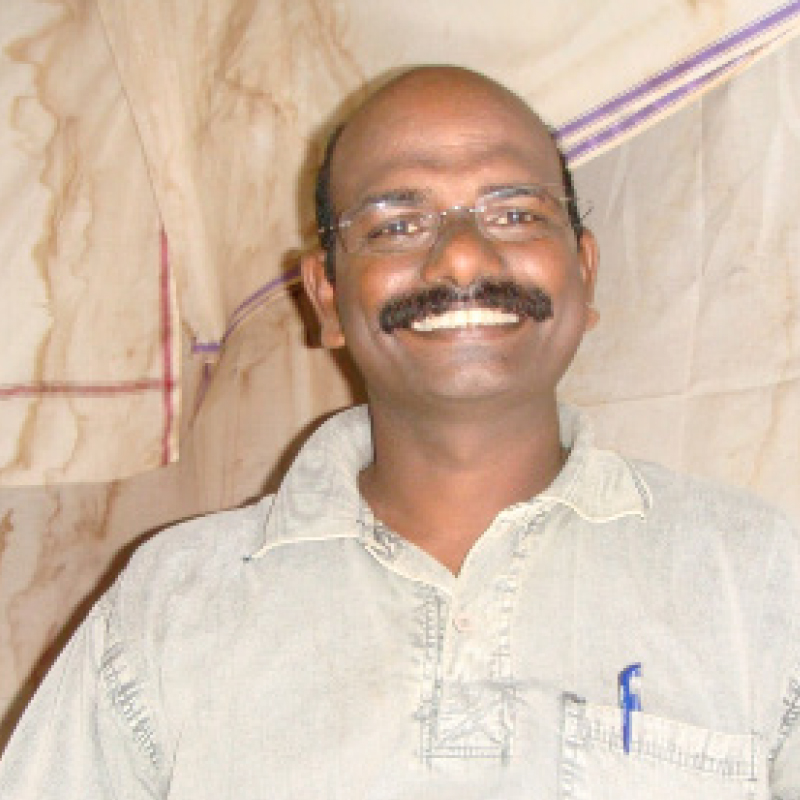 Last photo of Pulidevan alive inside the bunker – taken May 2009 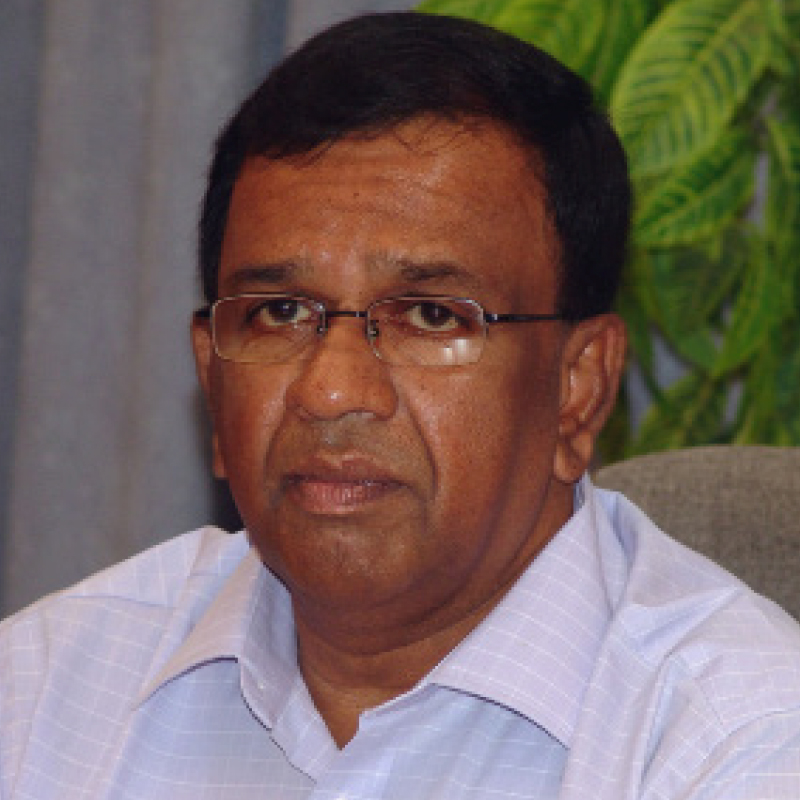 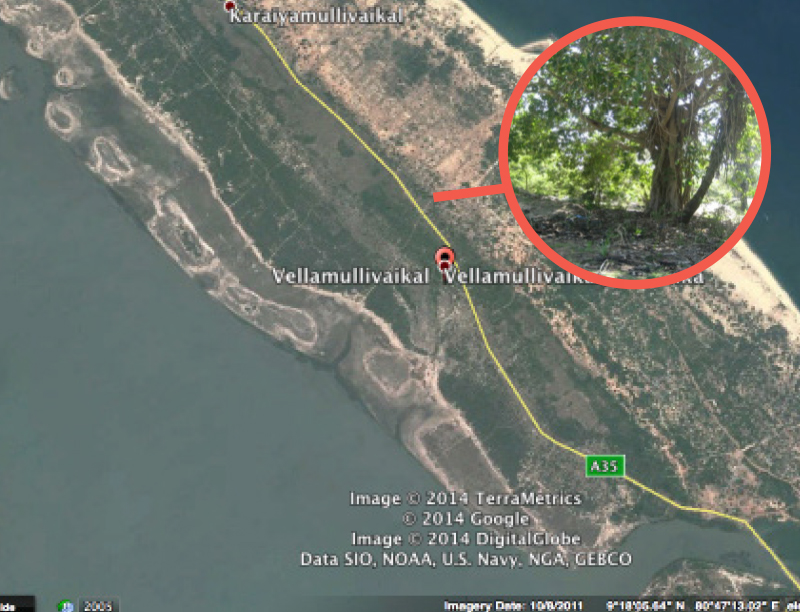 Location of Bunker of Pulidevan and Nadesan as confirmed by survivors.

Survivors say the political wing leaders were sheltering in a bunker under this large tree.

One of the intermediaries was a Tamil MP known to both the LTTE and government officials. His name is Rohan Chandra Nehru.

On 14 May 2009 N,ehru informed Basil Rajapaksa to be on standby for an LTTE message on a possible surrender. But Basil Rajapaksa sounded disinterested and then didn’t call the MP back for three days.

Sunday Times Journalist, Marie Colvin, did eventually speak to Mr Nambiar who told her that there wasn’t much interest on the part of the Sri Lankan government in a surrender because, “They seem to want to go all the way.”

Below is a chronological record of some of the phone calls made back and forth to the war zone as well as text messages sent by the Sri Lankan Foreign Secretary as the LTTE leaders negotiated their surrender.

At this point the LTTE still had access to a centralised Internet service working off a satellite base station until at least 14 May 2009; then they appear to have relied on Thuraya satellite phones.

Their phone communications reveal mounting desperation and panic. Interlocutors outside the war zone report hearing shelling, gunfire and screaming in the background during the calls.

From the 48 hours of communications documented here i,t is clear the LTTE informed a wide range of officials that they were about to surrender. It’s also clear that the top echelons of the Sri Lankan government agreed to the surrender and provided details on how the surrender should be made.

The agreement on the surrender came from three of the Rajapaksa brothers, Mahinda, Basil and Gotabaya Rajapaksa, as well as the Foreign Secretary, Palitha Kohona.

Mr Kohona later denied any involvement in the incident despite sending four text messages about the details to the LTTE through an intermediary in Europe.

At one point Basil Rajapaksa reportedly spoke directly on the telephone to Nadesan of the LTTE about the surrender just before it took place. 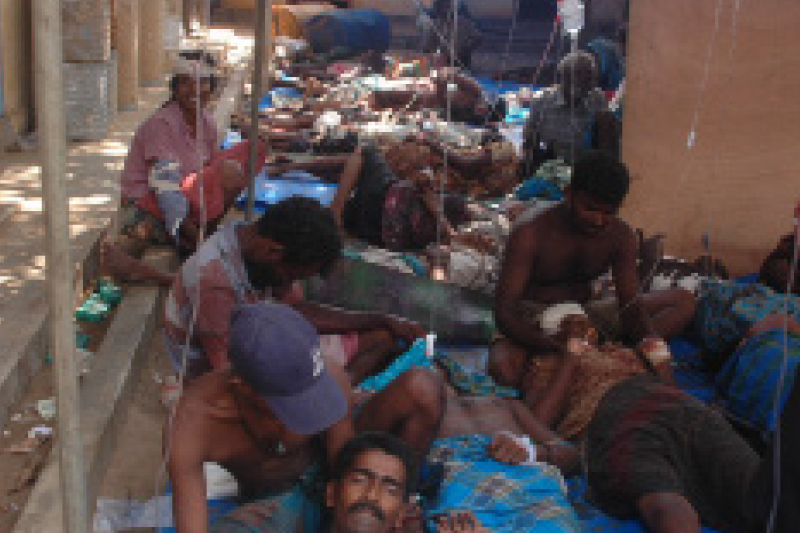 The LTTE political wing leader Nadesan told those he contacted that there were still 22,000 civilians still trapped inside the war zone and 3000 rebels, many of them injured.

0846: Foreign Secretary Palitha Kohona to Nadesan via a European intermediary: SMS: “Just walk across to the troops, slowly! And comply with instructions carefully. The soldiers are nervous about suicide bombers.”

Midday approx: Nadesan calls Rohan Chandra Nehru MP in Colombo. “I will give you an answer around the evening, or anytime, my leader is instructing me, keep your phone free so I can call you”. [Shelling heard in background].

1830: Nadesan calls Nehru. “We are ready to surrender under the leadership instruction”. The rebel leader, Prabhakaran had given Nadesan and the LTTE permission to surrender. Nadesan tells Nehru to speak to Basil Rajapaksa to arrange, “full security and ceasefire for when we come out.” Nadesan reports heavy shelling in their location with many casualties.

Basil Rajapaksa: “I am happy to hear this, it is anyway too late…I told you to tell them to surrender in those days but I will speak to the President and I will call you back.”

Nehru calls a number of embassies to tell them an agreement has been reached, including Norway, Britain, US. He calls Nadesan’s brother abroad.

1930 approx: Nadesan calls Nehru. Nehru tells him that Basil informed him that the President has accepted their surrender conditions. The conversation is very difficult because of loud shelling. Nadesan says he will prepare everyone to surrender.

Nehru tries to call Basil back but his phone is switched off. He tries the President without success.

1930: Nehru receives a call from Basil Rajapaksa who says, “we are taking the necessary steps and the President has accepted the conditions.”

Nadesan calls Sunday Times journalist Maire Colvin in London (the call patched via South Africa). Nadesan says: “We are putting down our arms…We are looking for a guarantee of security from the Obama administration and the British government. Is there a guarantee of security?”. Nadesan asks Marie Colvin to call UN Special Envoy, Vijay Nambiar who is travelling. The first time Nadesan tells Marie Colvin that it will be difficult to persuade the Sri Lankan government to accept a surrender.