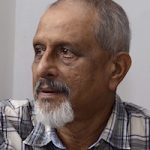 “If you tell a big enough lie and tell it frequently enough, it will be believed.” – Adolf Hitler

“Shine as they may, there are no kings, adorned with jewellery and pearls, that shine as does a man restrained, adorned with virtue’s ornament.” – Visuddhimagga

The two quotes – one from Hitler’s ‘Mein Kampf’ and the other from Buddhagosha’s ‘Visuddhimagga’ – path to purification demonstrate the dissonance of the ‘dhamma’ emanating from the Monastic order which holds hostage what is perceived as Sinhala Buddhist consciousness. A doctrine that was in its essence, a timeless message of ethical perfection has been reduced to a religio-nationalist ideology.

The Anunayaka of the Asgiriya Chapter Ven. Vendaruwe Upali thero has told us not to politicise or misinterpret his references to the words ‘Hitler’ and ‘military’ used in his 30-minute long ‘Anushasanwa’.

He has advised us to consider it in the correct context. The objective of this exercise is to place his references to ‘Hitler’ and ‘Military’ in the correct and appropriate context. Obviously, it must be the Sinhala Buddhist context.

The devotee and direct recipient of the advice and ‘Anushasana’ of the venerable Anunayaka thero has also weighed in. The sermon including the reference to Hitler was advise tendered to him and he was puzzled by the excitement it has caused. According to him, the Buddha has advised the Sangha to preach only to the wise. Now that, dear reader, is Vintage Gotabaya Rajapaksa doing what he knows best- Bana Talking– his speciality. A more learned label would be a fetishization of Buddhism.

The Presidential aspirant is missing the mark. The ‘Maha Sangha’ as they like to be identified is considered to be the voice of public reason. ‘Pararthacharya’- altruistic service to society was once the purpose of those who took refuge in the Sangha order.

It seems that they have now given ‘Parathachariya’ a new meaning and a new task. That of appropriating our history and retelling it to suit the politics of the Rajapaksa family.  Behind their claim to be the custodians of the faith and heritage is the dark desire for self-aggrandizement – an objective pursued with a narcistic intransigence.

Hitler represents the essence of unprecedented evil. ‘Hitler’ invented the mechanics of tyrannical rule that obliterated all traditional elements of political and spiritual values known to mankind. The advice to be like Hitler is, therefore, a matter on which even ‘Devadatta’ would have second thoughts.

The reference, therefore, is a disturbingly unprecedented precedent.

For the record, I must state that I am Buddhist by being born into a Buddhist family. I am an imperfect Buddhist who expects the Sangha to be more perfect than me in the business of ‘renunciation’- the purpose for which Prince Siddhartha left his palace.

Therefore, I will not be uncharitable and myopic to dismiss his reference to Hitler and Military rule as a spontaneous or involuntary observation in a postprandial homily delivered by a flatterer and a flunkey.

The personage involved is the second in command of an ancient monastic order that controls a vast network of wealthy temples holding vast tracts of land. The prelate in question is an archetypical representative of the upper-class Siam sect hierarchy. He represents a socio-political alliance and a process that perceives a Gotabaya Rajapaksa presidency as one that offers continuity, stability and progress in that order. Poet Auden’s ‘Secret is out ‘springs to mind.

“Behind the corpse in the reservoir …. behind the attack of a migraine and the sigh, there is always another story, there is more than meets the eye.”

Hitler was a charismatic leader who personified unprecedented evil in human history. His absolute hold on Germans was a product of the terrible times that Germany experienced during its transition from Hohenzollern rule to the dysfunctional democracy under the Weimar Republic.

The parallels are too close for comfort. We must tread cautiously in contextualising the remarks of the venerable Anunayake thero of the Asgirriya chapter who seems clearly disenchanted with current chaos and drift under the tottering ‘yahapalanaya’ rule.

It is, therefore, necessary that we strive as best as we could to comprehend the rhythm of the thought behind this single cry for a Sinhala Buddhist Hitler.

All actions are political, and all social relations are about power. We overlook this Gramscian premise at our peril. To do so is to lose our way.

It is hoped that by placing the terms ‘Hitler’ and ‘Military’ in context, we may yet preserve what is left of our dysfunctional democracy.

It will also equip us to treat the aspirations and ideals of the most venerable prelate with the seriousness and due diligence we owe him. He is no ordinary monk. He represents a powerful semi-feudal monastic landlordism.

He represents ‘tradition’. This notion of tradition has its inbuilt dynamics. The claims made by the Sangha fraternity as custodians of the faith and upholders of tradition have an authenticity and a moral appeal of their own. They – the Sangha enjoy the prerogative of defining and shaping their own culture and conduct.

Competitive politics has made the Sinhala adjectives ‘Poojaniya ‘and the ‘Vandaneya’ [used often by our President] when referring to them, an acknowledgement of their omniscience on matters spiritual and temporal. Their remit seems to cover all subjects ranging from metaphysics and philosophy to constitutional law and urban planning.

All societies are engaged in constant conflict with the modern struggling to replace the old traditional ways. Yet the political class for its convenience wants to have it both ways. The Sirisena -Wickremesinghe duumvirate is in a losing battle to be more Sinhala Buddhist than the Rajapaksa tribe.

Some time ago, the Prime minister and the Minister of Education who are now the leader and general secretary of the UNP disbursed Rs. 46million from the Central Cultural Fund to 150 selected Buddhist temples. That was pure patrimonial politics intended to boost the piety image of the ruling party. What goes around comes around.

The two monastic establishments of  Malwatte and Asgiriya in particular and the Sangha order in general for their comfort and convenience insist that modernity is a false god. They are great trapeze artists leaping from modernity to tradition and vice versa with supreme skill and flair. Shackled to myth and legend, their flock are lost in the land that is the foreordained repository of the faith.

We are furiously engaged in mapping the contemporary world unable to fathom the depth of the abyss that separates the ‘traditional’ and the ‘modern’.

Coming back to the Hitler incident, essentially and significantly, we must bear in mind that the occasion was the 69th birthday of Gotabaya Rajapaksa. He is a devoted Buddhist. He is an avowed vegetarian. He rears sharks as a hobby. He may well be our next executive president.

The Asgiriya Anunayake thero used the distinctive words ‘Hitler’ and ‘Military Rule’. It is no coincidence that his call for a ‘Buddhist Hitler’ was made in the same week that a robed ruffian was punished for decidedly uncouth behavior in court. There is more than meets the eye. Contained in this episode is another story.

It begins on 19th May 2009. The great unifier of the land Mahinda Rajapaksa began building the post-civil war patriotic triumphalist state. There were no longer minorities in the land. Only patriots and traitors. It was not stated explicitly. Yet, it was driven home implicitly. The Sinhala Buddhist state has finally gained mastery over all unnational deviants. It had no place or patience for outsiders, misfits and oddballs.

Mahinda Rajapaksa was awarded the title “Viśvakīrti Srī Trisinhalalādhīśvara” by the Malvatta and Asgiriya chapters for uniting the island. By the grace of the two monastic authorities of Kandy, Mahinda was the titular overlord of the three regions Ruhunu, Pihiti and Maya rata.

There were times when the Buddhist monk was an intermediary between the monarch and the subjects.

Throughout history, our Sangha has displayed a pliant disposition to seduction by autocratic rulers. Their attachment to spiritual and moral values have always remained proportionate to their institutional primacy and personal interests.

Mahinda Rajapaksa gave the Buddhist Sangha far more than mere constitutional prominence accorded to Buddhism. He made them enforcers of a sovereign faith. They were granted corresponding privileges and access to material benefits.

He harnessed the entrepreneurial talent of the urban Buddhist monk who had captured the imagination of an indolent middle class with choreographed rituals and devotional extravaganzas.

He assembled a support base of an elite core of the Sangha. It remains committed to restore his rule. They need no persuasion to vouch for his devotion and piety.

Now, we must contextualize ‘Hitler’ and ‘Military’ in what Antonio Gramsci the Italian cultural Marxist called ‘perpetual social ferment’ no pun intended. This is the perpetual ferment of the docile and ignorant mass that is irretrievably and naturally inclined to the so-called “idiocy of rural life” in the words of Karl Marx!

We must locate the Anunayaka Thero’s reference to ‘Hitler’ and ‘Military rule’ in the context of a definite and defined relationship between religiosity and prejudice.

The claim that the ‘Mahasangha’ has guided the governance of the land from primordial times according to Buddhist ethical dictates is thin, delicate and does not pass the test of practical reason.

Sorry. We cannot oblige the venerable Anunayake thero by standing between essential truth and unchangeable practices of an antiquated past.

The Anunayake thero’s homily and the arrogant dismissal of its implications by the recipient of the Hitlerite advise has a narrative of its own. Both attempt to silence the past and to erase the memory.

Time has arrived for us to reappraise the old cultural consensus. Those who evoke ‘Hitler’ are moral cowards who loudly proclaim how society should be run and how people should live. They fear change.

They fight to restore the old order, the patrimonial garrison state. That is the precise context in which Hitler was invoked.

Both preacher and perceiver claim and actively canvass for the opportunity to shape our future. It is our business to stop this Hitlerian cooperate of Saffron and Khaki.