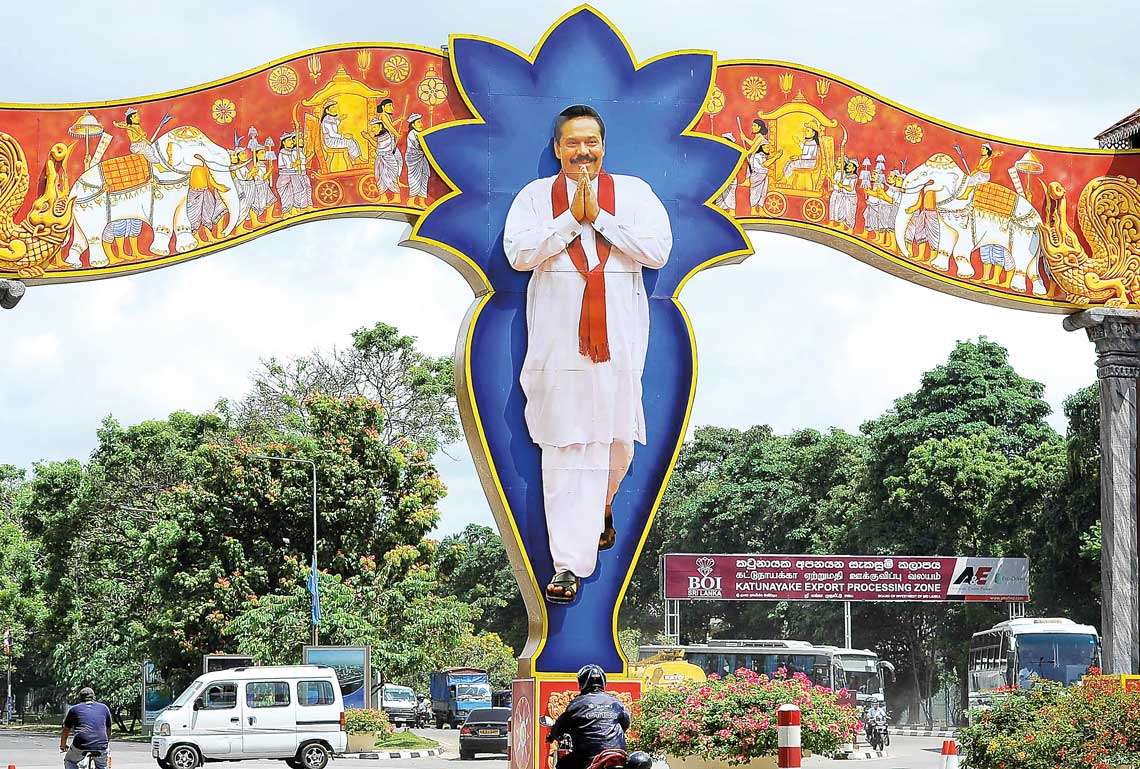 Following the recommendations made by the Presidential Commission of Inquiry into Serious Acts of Fraud and Corruption (PRECIFAC), the Attorney General last week filed indictments against those who have misappropriated public funds to conduct an election rally in Negombo in the run up to the 2015 Presidential Elections.

anager Chandana Pelpita and former acting Supplies Manager Lakmina Munidasa under the Public Property Act for misappropriation of public money to build the image of the presidential candidate Mahinda Rajapaksa in the guise of a ceremony to lay the foundation stone of the Negombo Lagoon Development Project.

Former Acting Fisheries Minister and the then Management of Ceylon Fisheries Harbour Corporation (CFHC) is accused of misappropriating public funds to the tune of a staggering Rs.11.47 million to hold a UPFA election meeting at the Municipal Grounds in Negombo on December 30, 2014 -nine days prior to the 2015 Presidential Elections in support of Rajapaksa’s candidature.

This money, spent for the meeting, is said to have been obtained from the funds allocated for the Negombo Lagoon Development Project.

But, according to reliable CFHC sources, who wished to remain anonymous, the laying of the foundation stone had taken place on January 4, 2015 under the patronage of the then Economic Development Minister Basil Rajapaksa.

The PRECIFAC report has raised concern as to why General Manager Piyal Abeysekara, who is also allegedly accused in the fraud, was allowed to remain in office at the time the inquiry was in progress. The report further states, ‘How can the CFHC employees be testified against the wrongdoers including the General Manager when the latter is still functioning as the GM as he could be a threat to those who give evidence against the offenders? The Commission recommends his immediate removal until the inquiry is over’.

According to the PRECIFAC report, it was revealed how the accused party had threatened to remove Finance Manager CHFC Nayana Samanthi Perera from employment if she did not approve payment for the service providers. Despite of the threats, Perera had not authorized a few payment vouchers, saving Rs.3.95 million to CFHC.

Notwithstanding, the Commission has also made a request to the Government not to appoint any of those who were involved in financial frauds to any government institution jobs, pointing the finger at the present regime for appointing the accused former Deputy General Manager Chandana Pelpita as a Working Director to the Fertilizer Corporation.

Meanwhile, the report also reveals how the Board of Directors that was appointed during the 100-day programme in the Good Governance Administration had approved a payment of Rs.120,000 for a lawyer who accompanied the accused General Manager Piyal Abeysekara when he was testified before the PRECIFAC. 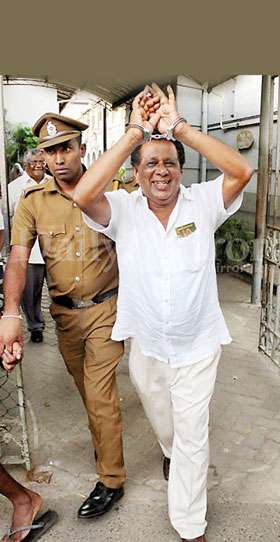 However, following the recommendation of the PRECIFAC, Abeysekara had been later removed from CFHC, according to the sources.

A whopping sum of Rs. 8.95 million had been spent to erect the main stage and the tents for the meeting while another Rs. 1.848 million had been paid to construct the Lagoon Development Project plaque, Rs. 1.25 million for caps and T-shirts for party supporters who attended the meeting, Rs.175, 000 to hire large LED TV screens to be used at the venue of the meeting and Rs. 1.09 million to print 2000 desk diaries to be distributed (at the meeting).

According to the CFHC sources, Display Media Advertising was offered the contract for Rs. 8.95 million to put up the stage and marquees, to supply VVIP and VIP chairs and 10,000 plastic chairs for the general public, a dancing troupe and a musical group, to provide music for the dancers in between the speeches.

The contract to print 2,000 desk diaries for Rs. 1.09 million had also been given to Display Media Advertising.

According to sources from Arjuna Graphics, Frontier 7 International Pvt Ltd and Display Media Advertising, the meetings were held at Acting Minister Sarath Gunaratne’s office. These meetings were attended by Chairman, General Manager, Deputy General Manager and some other officials from CFHC who discussed how work had to be carried out at the proposed ‘project’ site.

According to Display Media Advertising, their estimate to provide their service for the election meeting was Rs.8.95 million and it had been approved by the Chairman, General Manager and the Deputy General Manager of CFHC. The venue was Kattuwa in Negombo which is adjoining the lagoon. But later this venue was shifted to Municipal Grounds due to heavy rains.

“We started our work on December 22, 2014. On December 25, we were told that the venue had been shifted to Municipal Grounds by which time we had started erecting the stage. We had to dismantle the stage and the marquees and transport the goods to the new venue, which was two-and-a-half Kilometres away,” sources said.

According to the sources, Display Media Advertising had earlier provided their service to CFHC and that was why they had been offered the Negombo contract. “It was the former acting Fisheries Minister Chairman Upali Liyanage, General Manager Piyal Abeysekera and Deputy General Manager Chandana Pelpita who were directly involved in this project. Quotations were not called from any of those who provided their services to make the event a success. Our company was asked to give our quotation which was accepted without bargaining. The contract was given in mid-December and on the day we completed our work we were paid Rs. 5 million. Two days before the Presidential Election we were issued with a cheque amounting to Rs. 3 million. However, I could not get it cashed as the bank had received instructions from the new Board of Directors to stop the payments. All attempts thereafter to obtain the balance of Rs.3.95 million proved futile,” the sources claimed.

The sources further revealed how they got the contract to print 2,000 desk diaries, for Rs.1.09 million, through a deal done over the phone. “The Deputy General Manager offered us the contract to print and supply 2,000 diaries within six days. Since it was difficult to print 2,000 diaries within six days, we undertook to deliver 500 copies by December 30, and the rest on two separate dates,” he added.

Meanwhile, Arjuna Dhananjaya of Arjuna Graphics and Printers, Negombo, who was given the contract to supply T-shirts and caps for Rs.1.255 million, said that he cannot remember how many T-shirts and caps had the wordings printed on.

“We were offered the contract to supply T-shirts and caps, but cannot remember how much I supplied as this happened almost four years ago. I knew Minister Gunaratne personally as it was I who printed Gunaratne’s posters and banners for his campaign. In T-shirts and caps I was asked to print Gamanasubai, Jaya niyathai – Mahinda Rajapaksa and Meegamuwa Sarath Kumara Gunaratne respectively,” Arjuna told the Dailymirror.

When asked what his quotation was to supply T-shirts and caps, Arjuna said that he could not remember the amount, but added that the quotation figure was not given in writing but over the phone to the Minister’s Private Secretary. “Once we handed over the T-shirts and caps I was paid the full amount and when I was testified before the PRECIFAC, I told them how I got the contract. I revealed how the money was paid to me when I supplied the T-shirts and the caps. There was nothing for me to hide as I have not done any wrong. I only carried out a business,” Arjuna claimed.
However, according to Frontier 7 International Pvt Ltd, they have given their quotation in writing and have been paid for the work they have carried out except for the VAT component. They have met the CFHC officials in the second week of December and were asked to finish the construction of the plaque by January 3, 2015, as they were planning to lay the foundation stone the following day.
The new administration of CFHC after the fall of the Rajapaksa regime sent a letter, demanding them to refund Rs. 900,000, claiming that the feasibility report which was undertaken by the University of Moratuwa had stated that the contractor had overcharged for the construction work which could have been carried out for Rs.700,000.

“We never asked them to give this contract to our company, but it was they who chose us and when requested to give our estimate we gave our price. The previous management was in a rush to get all the work done for the Negombo Election meeting within 10 to 15 days.

If they planned the ceremony well in advance and followed Government procurement guidelines they could have offered the construction to the lowest bidder.

We were asked to appear before the PRECIFAC to give evidence in this regard. We are not the only party that has the technology and skill to carry out these constructions. We did not go behind them asking to offer the contract to us. The price given by us is our standard price. The issue was with the previous CFHC administrators as they wanted to get the work done in a rush,” sources from the Frontier 7 International Pvt Ltd added.

The CFHC sources said that they informed the PRECIFAC how payments were made to the contractors prior to obtaing Procurement Board’s approval.

Giving evidence before the PRECIFAC, the CFHC employees had told how the Acting Fisheries Minister and the CFHC bypassed the government procurement guidelines when offering the contracts to the parties known to them personally and how they obtained the estimates over the phone, paid a 50% advance and got the work done within few weeks.

The employees have also informed the Commission as to how the Ministry and CFHC officials ignored their protest against holding an election meeting in the guise of a foundation stone laying ceremony at a time when the Elections Commissioner had released guidelines to all government departments and corporations not to violate his instructions. Giving evidence the employees had further revealed how the then acting Minister refused to abide by the election guidelines and went ahead with the proposed meeting claiming that spending money and holding an ‘opening’ ceremony attended by the country’s Executive was not a waste of money. They had further revealed how the acting Minister acknowledged their failure to follow procurement guidelines as there was no time to get prepared for Rajapaksa’s visit as his visit was confirmed in mid- December.