Reflecting on Silent Revolutions What’s in store for Rainbow Revolution of 2015…? 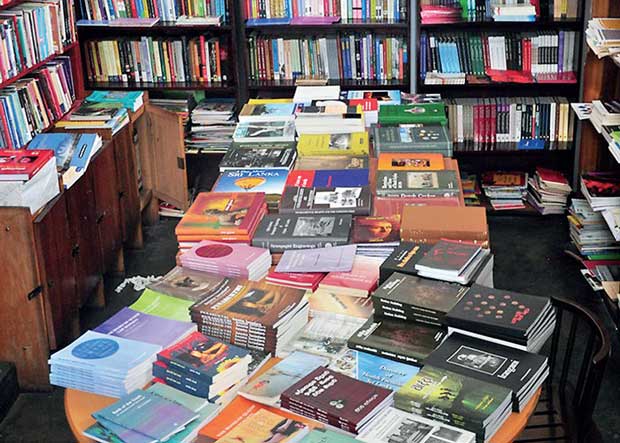 The idea that Sinhala and Tamil shall both be given official language status after independence was agreed among political leaders until the eruption of language controversy in 1955. On five different occasions between 1926 and 1943, first the Legislative Council and the State Council

that was established after 1931, had passed proposals supporting both Sinhala and Tamil replacing English as the country’s official language. Prime Minister, D.S Senanayake, unwaveringly stood by this position. His mistake wasn’t introducing in the five years of his tenure to bring about a systematic replacement of ‘English only’ with all three national languages spoken in the island. The political eagerness to use language as an electoral instigator contributed to Sinhala becoming the only official language in 1956.

In 1978, a new Constitution was promulgated by J R Jayewardene using the 5/6th majority at the 1977 elections

The 1956 election was fought on the issue of ‘a change from English to Swabhasha or Sinhalese/Tamil’ as an inevitable requirement with the growth of democracy. The United National Party (UNP) which governed the first eight years of post-independent Ceylon under three Prime Ministers—D.S Senanayake, son Dudley and his cousin Sir John Kotelawala- was careful not to create fresh problems for the government by attempting to make changes. This was despite the second tier leadership being under pressure from the rank and file for a popular ‘Sinhala only’ wave. Fulfilling his electoral promise to make Sinhala only within 24 hours, the Prime Minister SWRD Bandaranaike introduced the Official Language Act on 5th June 1956, which later became one of the darkest days of the post independent Sri Lanka. The parliament began the Second Reading debate the same day. The SLFP led Government and UNP opposition were extremely keen in getting the legislation passed. The Marxist LSSP and the CP strongly opposed it and risked the lives of their leadership as mobs gathered outside Parliament.

Tamil speaking citizens became anxious about their future. Federal Party led by SJV Chelvanayagam organized a Satyagraha campaign on the Galle Face Green before the days proceeding in parliament, only to be manhandled by misguided mobs.

S.W.R.D Bandaranaike who left the ruling UNP in 1951 and formed a new party styled Sri Lanka Freedom Party [SLFP], campaigned at the 1956 General Elections on the cry, ‘Sinhalese only’. However, he included a clause in his election manifesto which said, ‘Reasonable use of Tamil’ and shown only in the English copy. As he was gaining popularity, the UNP blundered by abandoning their earlier stance of parity for Tamil, and adopted a ‘Sinhalese only’ to fall in line with Bandaranaike. SWRD also promised to nationalise Tea estates owned by Sterling companies, take-over British Air Bases and evict the British from Trincomalee Naval base. The MEP backed by main constituent Sri Lanka Freedom Party, swept to power. Bandaranaike soon realised that the forces which had been released by his victory were formidable to resist; he found himself the prisoner of his election promises.

The parliament began the Second Reading debate the same day. The SLFP led Government and UNP opposition were extremely keen in getting the legislation passed. The Marxist LSSP and the CP strongly opposed it and risked the lives of their leadership as mobs gathered outside Parliament

The nation experienced a tense situation. There was inter-ethnic discord on the grounds of race while covert clashes erupted on the basis of class.
At the 1959 SLFP convention held in Kurunegala, the right wing took the lead in internal party elections; seeing the ‘leftist’ members being defeated. In May 1959, the Agriculture and Food Minister Philip Gunewardena, the father of Marxism, resigned. His number two, Senator PH William de Silva resigned a couple of days later, followed by five other left-leaning MP’s. Bandaranaike announced a fresh cabinet in June. The PM was somewhat stressed out and weary, and was cautious in managing ‘fast track bumps’. Certain quarters who tirelessly worked towards his triumph were making, unfair moves expecting business favors; upon rejection of such requests, the frustrated men conspired against him; finally he had to ‘pay the supreme penalty’ in September 1959, when he was assassinated by an extremist ‘Buddhist priest’.

The slain Prime Minister had courageously tried to contain the damage and enter into an accord with the Federal Party. However, his successors renounced this pacifying approach and forcefully put into practice the Sinhala only official language policy in such a manner that Bandaranaike would have never envisaged or approved. The unfair practices of recruitment to and promotions in Government service, the armed forces and the standardized admissions to universities alienated the minorities from administration.

Nationalisation of insurance companies affiliated to foreign interests; nationalization of petroleum owned by British and US to set up the Ceylon Petroleum Corporation, however, deteriorated our relations with Western powers. The US Government retaliated by threatening to withdraw assistance to the island, and in fact they did.

For the first time the term ‘Non-alignment’ was used in describing the foreign policy of Sirimavo’s Government. It was a policy of non–alignment with super powers and neutralism; her Government’s relations with all countries were friendly. Sirimavo had the courage to thwart US moves to station through US Seventh Fleet some nuclear task force units in the territorial waters of the island.

Dudley Senanayake’s 1965-70 ‘National Government’s attempt to solve Language issues through the introduction of district councils proved catastrophic to its popularity. In 1966, SLFP led leftist opposition demonstrated against the move causing a Buddhist monk being shot at by Police at Kollpitiya.

With the SLFP coming into power in 1970, they replaced the Order in Council of 1946 with a new Constitution adopted at the Constituent Assembly held in 1971/1972 at the Navarangahala of the Royal Primary School in Colombo. The 1972 constitution changed the country’s name to Sri Lanka from Ceylon, and established it as an independent sovereign republic.

The 1972 constitution had many shortcomings. The non- representative and non- inclusive nature of its drafting process was one such drawback. The committees entrusted with the responsibility of drafting were populated with members of the Government. Drafts of resolutions were prepared under the purview of Dr Colvin R. de Silva and a group of senior SLFP MPs, and the leadership of the LSSP and CP. The Federal Party withdraw itself from the Constituent Assembly in mid 1971 citing the above and other reasons. The UNP complained about the lack of consideration given to recommendations made by the opposition, stating that they would not vote in favour of it. Surprisingly, lack of safeguards made for the country’s minority, their basic rights, religion and language- even having done away with the provisions included in the 1948 Constitution. ‘Foremost place for Buddhism’ which wasn’t there in the 1948 constitution was introduced to dupe the Buddhists.

Sirimavo, the woman who took Sri Lanka to the world in 1960 as first woman Head of State, repeated her feat when she hosted and took up the Chairmanship of the 5th NAM [Non – aligned Movement’s Summit] held in Colombo in 1976 in the presence of 86 heads of state. The framework for “a new International Economic Order” was the action programme of the conference, which was one of the most important contributions of the conference.

The first Republican Constitution lasted for only 5 years. The UNP, which assumed power in 1977, introduced an Amendment to the 1972 Constitution on 20 October, 1977 creating an Executive President who would be the Head of the State and Head of Government.

In 1978, a new Constitution was promulgated by J R Jayewardene using the 5/6th majority at the 1977 elections. Sri Lanka was re-named the Democratic Socialist Republic of Sri Lanka. The new Constitution continued the immunity of the President, ministers were to be appointed by the President, and he would need to consult the PM only if necessary. Although constitutionally the President has to be elected at an election, under new Provisions in respect of the first President, the person who holds the post of PM at the time of the new Constitution coming into effect, would be considered the elected President. The new constitution, which came into effect on 7 September 1978, granted the president sweeping—and almost dictatorial—powers. He moved the legislative capital from Colombo to Kotte and opened up the economy.

JRJ had held a Referendum in 1982 to extend the period of Parliament for a further term of 6 years. The foreword to the proposal seeking the mandate of the People for such extension said, ‘to ensure for a further term the stability necessary for the continuation of the programme undertaken for the advancement and progress of the People of Sri Lanka’

The amendment sought to ‘continue until August 4, 1989’ received the ‘approval’ at a highly rigged vote of the people. He knew that if an election was held in terms of the Constitution after 6 years under the new PR system, it would not have produced the ‘required stability’ needed by JRJ. Thus with the ‘winning’ of the Referendum, he received what he wanted. Between 1983 and 1988, 11 amendments, all at his whims and fancies had been made to the Constitution.

To his credit, the Mahaveli, the largest multipurpose development programme in the history of the Island, which would have lasted about 30 years, was accelerated to be completed within its term of office of first 6 years.