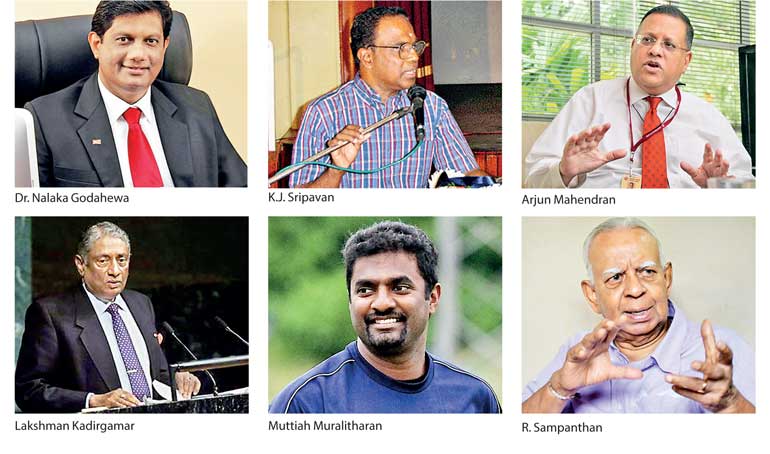 Dr. Nalaka Godahewa’s speech delivered at the 36th session of the UNHCR in Geneva on 27 September as reported in various newspapers contains half-truths and untruths. In short it is devoid of facts. I would like to refer to some matters stated there in and give my views and clarification thereto.

Lakshman Kadirgamar was considered a ‘good bat’ by the then Government for defensive batting, to distort facts to the world with regard to the discrimination heaped on the minorities in general and the Tamils in particular. This he did well to the satisfaction of his masters. However, Kadirgamar would have been respected by the Tamils too if he brought to light the problems faced by the Tamils as well, in the hands of the successive Sinhala governments. Instead he was keen to satisfy the Sinhala people only.

In appreciation, suggestions were made by certain individuals in the Government to ‘appoint’ him as the prime minister. He was never a contender. He was only an intended contender, but tenderly dissuaded from doing so, because he was a Tamil. Kadirgamar never had the capacity to fight his way through or demand, for fear of hurting the Government.

K.J. Sripavan was a Chief Justice of the country by fortuitous circumstances. The President and Prime Minister had to take oaths under him as he was the acting Chief Justice. There was a void in seat of the Chief Justice Shirani Bandaranayake due to the unfortunate situation created by the Rajapaksa Government. Sripavan was a good choice as he would never have gone against the Government’s thinking.

Dr. Indrajit Coomaraswamy appears to be good choice but what about his predecessor Arjun Mahendran? Mahendran was appointed as Governor of the Central Bank, but it appears that the reins were held by his friend the Prime Minister, which resulted in a pathetic situation.

The Bar Association is not a Government institution to talk high of Geoffery Alagaratnam’s appointment as its President.

Muttiah Muralitharan’s world record was not bestowed by the Government. It was an achievement by him through his efforts, supported by his team mates, especially by Arjuna Ranatunga. However, according to recent press report, moves are afoot to remove his name from the Pallekelle Stadium. Why?

The Opposition Leader R. Sampanthan took this position not by right. He was appointed by the Government to shield them from the onslaught from the Joint Opposition. True to the Government’s expectation Sampanthan is flirting with them, forgetting the purpose of his election by the Tamil people.

He has amplified his faithfulness by his actions including the failure to attend the recent UNHCR secessions’ in Geneva for fear of antagonising the Government. Sampanthan would have been very comfortable with Godahewa in Geneva, if he had gone there. In effect he is not a trustworthy leader of the opposition even for the Sinhalese.

It will be waste of time to write about the private companies which have grown up on their own despite obstacles placed by the Government. Most of these companies were remnants of the British companies. Due to sheer hard work they have been able to continue successfully. Nevertheless it may be prudent for people like Godahewa to analyse and ascertain the ethnicity of the senior executive staff in these so-called Tamil companies.

One swallow doesn’t make a summer.

In the National Flag, the Sinhalese are not represented by the maroon background but by the lion holding the sword and the four bo leaves in the four corners. The Sri Lanka flag was originally designed only with a lion and the sword in the flag. However, when the Tamils and the Muslims protested, they were given two stripes (popularly referred to as amude).

You will note that the sword held by the lion is pointed at the strips as a warning to the Tamils and the Muslims. The need to give recognition to the minorities in the national flags of other countries did not arise as their national flags did not depict any ethnic divide. In the recent past too there were moves to erase the strip and sing the National Anthem in Sinhala only.

Thesavalamai does not prevent any Sri Lankans buying land in Jaffna. This is a deliberate misrepresentation of facts. Please refer the article written by Vivekanadan under the headline ‘The Myths and Misconception of the Thesavalamai Law,’ which appeared in the Sunday Times of 30 January 2015. Notwithstanding this, Thesavalamai is a proof of an existence of a separate kingdom.

Further, please note that the Tamils are not opposed to Sinhalese buying properties in the north and east individually. But, they naturally fear the State-aided colonisation so as to change the texture of the existing population, which was the hallmark of D.S. Senanayake.

This was/is continued unabatedly by others, with the ulterior motive of reducing the Tamil representation in Parliament and elsewhere. Even a part of the 75% of the population colonising the 25% of population may result in completely destroying the identity of the Tamils.

The caste system prevails not only in Jaffna but almost all parts of Sri Lanka and Asia. Even among the Sinhalese the caste system prevails – Karavas, Goviyas, Dhobis, etc. Late C.P. de Silva, Colvin R. de Silva and even the late President Premadasa suffered immensely because of their caste. In fact, subtle efforts were made by the so-called high caste MPs to prevent Premadasa becoming the president.

It is said that Premadasa lived in constant fear of being ousted by his own party men, because of his caste. If you go through the matrimonial pages in the press, you will see caste being mentioned as Karawas, Goviyas, Bodu Govi, etc. as a prerequisite.

S.W.R.D. Bandaranaike advocated Sinhala Only as the official language. This was the breaking point. This was the beginning of the end of the cordiality between the Sinhala and Tamil people. The UNP too supported it. Even the LSSP stalwart Colvin R. de Silva who once stated “two languages one nation and one language two nations” subsequently caved in and supported the Sinhala Only Act and for Buddhism to be given the foremost place.

It is an outright lie to say that that the blood bank in Jaffna would have gone dry if not for the blood donation made by the Sinhala soldiers. It is another publicity stunt to artificially enhance the value of the Army to be stationed in Jaffna.

Sri Lanka you say has wiped out terrorism but who was responsible for its creation? A mass hysteria was created by the Government by introducing the standardisation of marks for the university entrance examination, which resulted in the Tamil boys/girls being pushed to the wall, resulting in the younger generation taking up arms. Even the parents could not control their children. War may be over! But has the reason for the war been eliminated?

All public documents carry both Sinhala and Tamil languages, it is said. Please go to Police stations and try to make an entry in Tamil. I was at the Traffic Court No. 7 recently to assist a friend. I was called upon to sign a bond in support of my friend. The bond document was in Sinhala only. Neither Tamil nor English documents were available. Hence I was reluctant to sign this document as I did not understand Sinhala. But if I did not sign the bond my friend would have been in great difficulty. Hence, I had to sign the document to assist my friend; despite my knowledge of Sinhala being questionable.

The Sunday Times of 1 October carried a news item which states: “The Ceylon Teachers Union (CTU) last week charged that the Ministry of Education (MOE) from the beginning of this year failed to issue circulars in Tamil language to schools.” This situation has been prevailing for quite some time.

The development funds diverted to the north and east are a drop in the ocean. It is an eye-wash, to cheat the north/east population and the world. If the Government can release acres and acres of land held by the Army, the people there can look after themselves and mitigate their sufferings to a great extent.

The JVP detainees were released by JR without hesitation, but why not the Tamil detainees? Why is the Government reluctant to allow free flow of funds from diaspora through recognised banks to organisations involved in helping the Tamils?

Discrimination in dealing with the dead

Even in death, there is discrimination. When the beauty queen from Hambantota, Prema Manamperi, was raped and murdered during the JVP ‘insurrection’, the Army men responsible for it were taken to task and punished. Of course, the then CMU Leader late Bala Tampoe spearheaded the agitation successfully to ensure justice.

But what a about Isai Priya, the TV presenter of the north during the war, who was raped and killed by the Army at the end of the war? She was paraded naked like Prema Manamperi and tortured, but no action has been taken. Why?

You may have enough and more constitutional provisions with regard to language rights, but are they being implemented? Marriage certificates and death certificates are invariably issued in Sinhala and the Tamils have to go behind sworn translators for translations.

Even when a few of the public documents are in Sinhala and Tamil, there are no officers who understand Tamil in most places. Try your luck at the post offices to send registered letters addressed in Tamil and you will realise the difficulties. Almost all the commercial banks both private and Government have various different accounts titled in Sinhala only. No translation is provided – only transliteration is given.

In Canada all public documents are in English and French. All items put out for sale have to carry labels in both languages. What is the difficulty in doing so here? The Canadian Embassy in Sri Lanka greets you in both languages (English and French) when called. I understand that the Canadian Government funds the implementation of the language policy to a certain extent in Sri Lanka.

Finally, Dr. Godahewa needs to be thanked for prompting a reply with observations/clarifications for the Sinhala people to understand the trials and tribulation under gone by the Tamils at every turn. Facts are sometimes stranger than fiction.