Last Friday’s mosque massacre in Egypt’s Sinai Peninsula is yet another tragedy that has brought to the surface the crisis within Islam. The crisis is rooted in not only ideological differences among Muslims, but also on socio-economic backwardness. The solution is found not anywhere but within Islam itself. 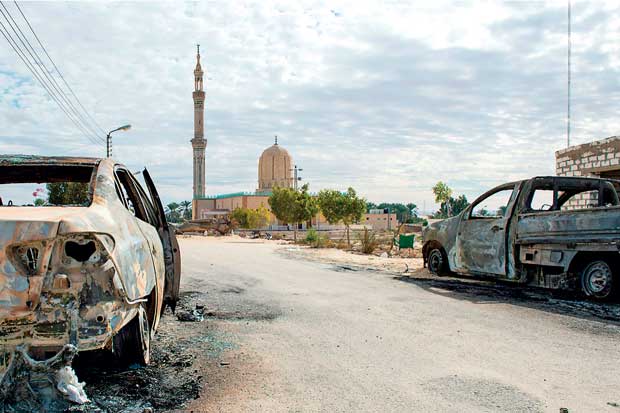 The Rawda mosque, roughly 40 kilometres west of the North Sinai capital of El-Arish. Armed attackers killed at least 309 worshippers in a bomb and gun assault on the packed mosque in the restive North Sinai province. AFP

Following the attack, Egyptian President Abdel Fattah al-Sisi ordered his military command to use all force necessary to secure the Sinai Peninsula within the next three months. But analysts believe that

the failure of successive Egyptian governments to address the socio-economic issues of the people in the Sinai Peninsula has enabled extremists groups to set up a base in the region. Economic deprivation produces communities without much education or enlightenment and this condition, in turn, enables terror masters to recruit depressed youths living in a state of hopelessness.

More than 300 Muslims were killed by Muslims in the packed al-Rawda mosque in Sinai last Friday because the killers abhorred the type of Islam their victims were professing. The victims were followers of Sufism. The so-called puritans allege that Sufism has degenerated into a form of polytheism with the followers becoming saint worshippers and adopting practices which have not been mentioned in the Quran or in the authentic sayings of the prophet. But Sufi followers say Sufis are intermediaries and they do not raise them to the status of God. Puritans such as Salafis and Wahhabis strongly refute the explanation. 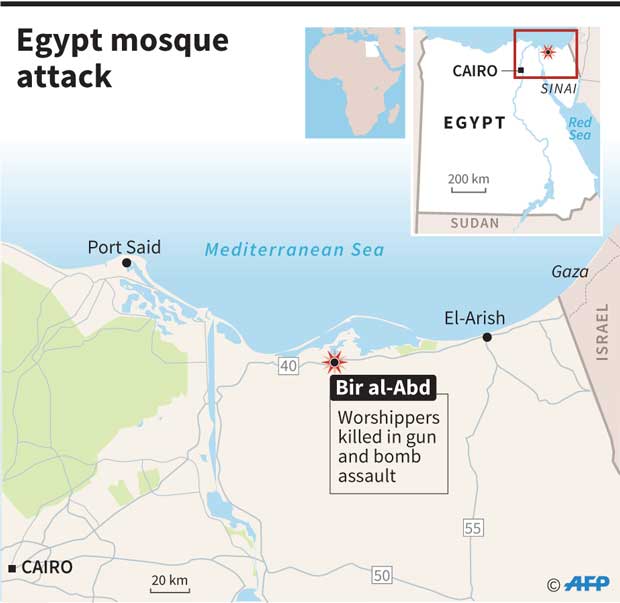 as not the first of such attacks. Neither will it be the last as long as the Muslims ignore the liberative spirit of Islam and its rationalistic roots. In February this year, an Islamic State (IS) suicide bomber blew himself up, killing more than 90 people at a Sufi shrine in Pakistan’s Sindh Province. In October this year, 18 people were killed in another suicide blast at a Sufi shrine in Pakistan’s Balochistan province. In Iraq, too, attacks on Sufi and Shiite shrines are a regular occurrence.

Extremism presents a distorted picture of Islam without its liberative spirit. Adding to this sad state of affairs is the recent protest in Pakistan over a minor change in the oaths of MPs. The protesters were angry that the words ‘I solemnly swear’ had been changed into ‘I believe’ in the MPs’ oath where they declare that the Prophet Muhammad was the last of the prophets, a declaration that shuts out Ahmadi or Qadiyani minorities from the democratic process. To appease the protesters, the law minister resigned and the government restored the old oath. The overreaction, however, goes counter to the liberative spirit of Islam.

Also adding to this crisis is the opposition in Sri Lanka to Muslim personal law reforms.  The spirit of Islam aims to empower women, not to imprison them in harems or in head-to-toe jilbabs. Islam recognises the women’s rightful role in society, as community leaders and judges. Last week, in an interview to New York Times, Muhammad bin Salman, the reform-minded crown prince of Saudi Arabia, said, “At the time of the Prophet Muhammad, there were musical theaters, there was mixing between men and women, there was respect for Christians and Jews in Arabia. The first commercial judge in Medina was a woman! So if the Prophet embraced all of this, do you mean the Prophet was not a Muslim?”

Yet the scholars, conveniently misinterpret a Quranic verse to equate a woman’s locus standi as a witness in a court of law to half that of a man. Verse 2:282 which they cite in support of their stand, refers to witnesses in trade transactions against the backdrop of the possibility of women being subjected to threats and intimidation by a party to the contract. But several other verses refer to witnesses without any gender identity. Of particular significance are the verses six to nine in the chapter titled ‘Light’ or An-Noor. The verses give equal weightage to the evidence of a man and a woman. But, most Islamic scholars, hell bent on upholding male chauvinism, conveniently ignore these verses to perpetuate the oppression of women. No wonder, some of them still advocate the much-derided triple Talaq – the instant divorce which has plunged many women into destitution.

The Quranic Chapter titled ‘al Mujadilah or the Pleading Woman’ outlaws Zihar, a barbaric practice which reduced a wife to a virtual slave of her husband with no right to remarry another person. The lesson to be learnt from this chapter is that God does not approve ‘any’ injustice to women. But many so-called scholars cannot see the wood for the trees, and by their opposition to reform the Muslim personal law, they advocate injustice which many Muslim women are forced to endure.

The Muslim holy book Quran entices humanity to engage in rational inquiry, to ponder and to meditate. But the action of some Muslims has made Islam a canker that needs to be rooted out.

The advent of Islam as preached by the Prophet Muhammad whose birth anniversary – according to some narrations, also his death anniversary – falls today is not to freeze the progress of humanity in the seventh century. Rather his mission with a progressive character was to liberate humanity from ignorance and barbarism, from blind faith in myths and superstition, and from slavery and oppression. But sadly, the liberative spirit within a strictly monotheistic order has long been lost in the tyranny of irrationalism. It is this distorted Islam that drives some misguided groups to kill anyone who does not subscribe to their version of Islam. The violence they perpetrate is nothing but a manifestation of their intellectual bankruptcy. Thick-skulled, they are incapable of understanding that the height of civilisation is reached when ideological conflicts are won or lost through dialogue and debate, not through killing and terrorism.

Yet, violence is a valid currency in the Middle East where most people believe there is a Western plot to keep the Arabs and Muslims under perpetual subjugation, first through the colonialism project and then through other means such as the setting up of Israel and igniting sectarian violence and civil wars.

Muhammad Iqbal, the philosopher behind the Pakistan idea, insisted through his poetry that Islam was just as rational as any Western system. But there are only a few takers. As a result, fanaticism prevails over rationalism which guided the Abbasid Caliphate from the 8th century to the 12th century to reach great heights in science and literature.